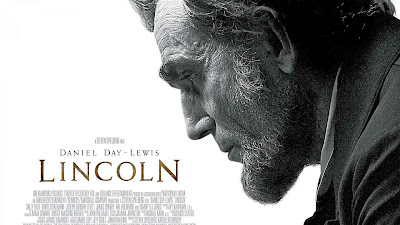 If we have two films about slavery nominated for the Academy Award for Best Picture, is it too much to ask that at least one of them actually say something about racism? Sorry. That might have been harsh. Both Django Unchained and Lincoln do say something about racism: people in the past were racist and that was a bad thing. My instinct here is to be heavily sarcastic, but that wouldn't do the inanity of these films' discussions of racism justice.

Both films depict overt acts of racism, and even go so far as to depict these acts in a negative way, but that's about it. Maybe I should just be glad for the fact that we're past the days where The Birth of a Nation could be a box office success. That's essentially the message of Lincoln, after all: a great man did a great thing, so be happy that he did it and that you don't have to live in a time before he did it. But I'm not. The problem is that overt racism is not the only kind, nor is it the worst kind. Zizek identifies the underlying racist core of multiculturalist ideology in his analysis of the infamous Oriana Fallaci:

Fallaci's mistake was to take the multiculturalist subservient "respect" for the Muslim Other seriously. She failed to see how this "respect" is a fake, a sign of hidden and patronising racism. In other words, far from simply opposing multiculturalist tolerance, what Fallaci did was to bring out its disavowed core. The French philosopher Alain Finkelkraut said in an interview... commenting on the French suburban outbursts: "... Step by step, the generous idea of a war on racism is monstrously turning into a lying ideology. Anti-racism will be to the twenty-first century what communism was to the twentieth century. A source of violence." Finkelkraut is right here, but for the wrong reasons: what is wrong in the politically correct multiculturalist struggle against racism is not its excessive anti-racism, but its covert racism.*

The problem with Lincoln is not only that it ignores this "covert racism" but that it in fact participates in it. The point is not that Abraham Lincoln was racist. He obviously did something which is and was undeniably admirable. The point is rather that making a movie about Lincoln in today's ideological climate involves much more than simple historical celebration.

An easy way to see this "covert racism" is in Spielberg's portrayal of the black characters themselves. In reality, during the passage of the 13th Amendment there were countless black activists lobbying in various ways for its passage. In Lincoln, with the single exception of the one black soldier at the very beginning of the film who questions Lincoln regarding the problem of racial inequality among officers in the army, all the black characters passively wait for their white savior to emancipate them.** This is racist ideological historical revisionism at its finest (and it doesn't help Spielberg's case that he claimed that the film is simply his "dream" of what happened). My point is not that the movie is bad because it's historically inaccurate, but that it's bad because its inaccuracies reveal an underlying racism.

Okay, so with that out of the way, all the technical aspects of the film were great. The acting was impeccable (Daniel Day-Lewis, Tommy Lee Jones, Sally Field, and David Strathairn to name just a few of the exceptional performances), the lighting was phenomenal, the tension and pacing were spot on, the sets and costumes were great... The problem for me was that this made me all the more disappointed that Spielberg had to ruin it with his racist vision of the time. I liked the fact (that almost passes unnoticed) that Lincoln is in a sense sacrificing a lot of white soldiers in order to abolish slavery. I also liked how Lincoln had to circumvent the law in order to uphold justice (revealing how the law does not serve justice but maintains order). But for me the film was ultimately ruined by its self importance and general lack of anything valuable to say.