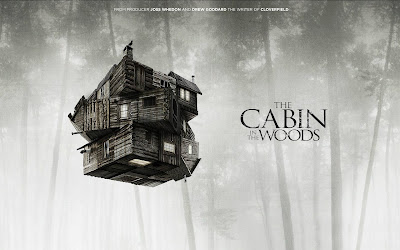 First things first: The Cabin in the Woods (2011) has an excellent twist (sort of—they tell you it's coming but it's nonetheless awesome) in its final moments which I think is actually worth not ruining. Unfortunately it is one of the focuses of this here essay-thing. So before you continue on, just take that into consideration. I am about to ruin the movie (probably in more ways than one). Also, I made this awesome article where I talk about all the different monsters in the film, so definitely check that out.

The Biggest of Big Others

I want to talk about The Cabin in the Woods's relation to/depiction of the Big Other (which I think it has quite a unique take on), but first I'll isolate the bits of the movie I want to analyze.

There are four groups of people in the movie to isolate: first, what I want to call the "Subjects" (maybe the "Objects" would be more appropriate but there you go), or the people who go to the cabin and are attacked by monsters; second, the "Horror Crew", the monsters themselves; third, the "Sci-Fi Crew", the people organizing the whole thing (including the amazing Richard Jenkins); and finally, the "Biggest Other", the angry god figure who only appears for about 2 seconds at the end of the film.

Basically what's going on in the movie is there's a cabin (in the woods) which is bugged and controlled by the Sci-Fi Crew. When the Subjects enter the cabin and go into the basement they pick (unknowingly) which Horror Crew to be haunted/terrorized/killed by. The result is recorded and distributed as a sort of horror-themed reality TV show (as far as I'm aware; this is never really clarified in the film—the closest we get is Richard Jenkins saying "Gotta keep the customer satisfied."). The actual purpose of killing the Subjects, however, is to appease the Biggest Other (blood for the Blood God style), and these sacrificial Subjects each fall into a specific archetype (athlete, whore, scholar, fool, and virgin).

So despite my simplification there's a lot going on here, and most of what I want to look at has to do with the Big Other, so to start here's a bit of a crash course in what (Zizek thinks) Lacan means by the Big Other. In How to Read Lacan (2006), Zizek spends about three pages defining the Big Other (with his typical tangents) and here I've attempted to pull out the two best parts. First:

The symbolic order, society's unwritten constitution, is the second nature of every speaking being: it is here, directing and controlling my acts; it is the sea I swim in, yes it remains ultimately impenetrable - I can never put it in front of me and grasp it. It is as if we, subjects of language, talk and interact like puppets, our speech and gestures dictated by some nameless all-pervasive agency. (8)

This initial definition (which Zizek subsequently clarifies/expands) actually seems to fit the Sci-Fi Crew. They created the "unwritten constitution" for the Subjects, the rules of the cabin in the woods; through direct (invisible walls/demolition) and indirect (drugs) means, they "control their acts"; through surveillance they are an "all-pervasive agency". And yet for the Subjects, "it remains ultimately impenetrable", they can never "put it in front of them" (until the end of the film - I'm getting there).

Interestingly, this definition also seems to fit the Biggest Other, but in a slightly different way: it created the "unwritten constitution" for the Sci-Fi Crew; through unclear means it surveys and "controls" the Sci-Fi Crew. What's going on here? Let's go back to Zizek:

In spite of all its grounding power, the Big Other is fragile, insubstantial, properly virtual, in the sense that its status is that of a subjective presupposition. It exists only in so far as subjects act as if it exists. Its status is similar to that of an ideological cause like Communism or Nation: it is the substance of the individuals who recognize themselves in it, the point of reference that provides the ultimate horizon of meaning, something for which these individuals are ready to give their lives, yet the only thing that really exists is these individuals and their activity, so this substance is actual only in so far as individuals believe in it and act accordingly. (10)

Another interesting connection to the Big Other is Marty, the outsider of the party. He's perpetually stoned (unlike the rest of the party or anyone else in the movie) and comes up with strange ideas about "puppeteers". While this may seem at first like true belief in the Big Other, what is actually happening is that Marty is reducing the Big Other to a regular small other, to one of us. His paranoia allows him to see through the ruse created by the Sci-Fi Crew. In short, Marty does not believe in the Big Other. Zizek explains the implications of this in For They Know Not What They Do (1991)

The Lacanian "big Other": the field of a symbolic pact which is "always-already" here, which we "always-already" accept and recognize. The one who does not recognize it, the one whose attitude is that of disbelief in the big Other, has a precise name in psychoanalysis: a psychotic. A psychotic is "mad" precisely in so far as he holds to attitudes and beliefs excluded from the existing "life-form"... (151)*

At the end of the movie, when Sigourney Weaver is explaining the situation with the Biggest Other, Marty exemplifies this position of holding "beliefs excluded from the existing 'life-form'": when confronted with the possibility of the end of the world, he says, "If you gotta kill all my friends to survive, maybe it's time for a change." If nothing else, the one belief that cannot be justified within the existing "life-form" (Symbolic order) is that the existing "life-form" ought to be destroyed. This makes Marty not only a "burnout" (in his words), but more importantly, a psychotic.

This is problematic because Big Others don't take too kindly to people not believing in them. After Marty speaks this (and this for me is one of the many reason to watch this film if you haven't), the Biggest Other reaches up from the ground and, presumably, destroys the world. This is one of a very few filmic representations of Walter Benjamin's "divine violence" (violence which interrupts the progress of history).** Zizek explains in his excellent book Violence (2008):

When Marty says that "it's time for a change" he (inadvertently) reveals the impotence of the Big(gest) Other. He expresses a lack of faith in the Big(gest) Other's ability to create a "life-form" worth living in. The only thing the Biggest Other can do at this point is carry out a blind passage à l'acte*** and destroy the world (Big Others aren't known for their temperance). Of course since the the Big Other actually doesn't exist, this scene is to be taken metaphorically instead of realistically. What is happening is not that the world is actually being destroyed, but rather that the "life-form", the Symbolic order, is being destroyed to make room for the "change" Marty calls for.


*According to Zizek, "life-form" is basically Wittgenstein's term for Lacan's Symbolic order. Not sure if that clarifies or mystifies this quote but there you go.

**For more on divine and other categories of violence, check out my essay analyzing them in the context of contemporary film.

***For those of you who don't know what a passage à l'acte entails, Zizek explains it with reference to Taxi Driver (1976):

What is a passage a l'acte? Perhaps, its ultimate cinematic expression is found in Paul Schrader's and Martin Scorcese's Taxi Driver, in the final outburst of Travis (Robert de Niro) against the pimps who control the young girl he wants to save (Jodie Foster). Crucial is the implicit suicidal dimension of this passage à l'acte: when Travis prepares for his attack he practices in front of the mirror the drawing of the gun; in what is the best-known scene of the film, he addresses his own image in the mirror with the aggressive-condescending "You talkin' to me?" In a textbook illustration of Lacan's notion of the "mirror stage," aggressivity is here clearly aimed at oneself, at one's own mirror-image. This suicidal dimension reemerges at the end of the slaughter scene when Travis, heavily wounded and leaning at the wall, mimics with the fore-finger of his right hand a gun aimed at his blood-stained forehead and mockingly triggers it, as if saying "The true aim of my outburst was myself." The paradox of Travis is that he perceives HIMSELF as part of the degenerate dirt of the city life he wants to eradicate, so that, as Brecht put it apropos of revolutionary violence in his The Measure Taken, he wants to be the last piece of dirt with whose removal the room will be clean.

The Biggest Other wants to destroy the world so that it will be "the last piece of dirt with whose removal the room will be clean" - when faced with its own impotence it realizes it must destroy the world and then itself.
analysis Benjamin Big Other Cabin in the Woods divine violence ideology impotence Marty passage a l'acte Richard Jenkins Zizek