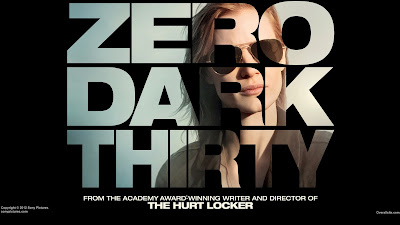 This movie is not a documentary.

This issue is something Zero Dark Thirty struggles with. Kathryn Bigelow stated in her defense against attacks that the film legitimized or endorsed torture* that this was not her intent and that she just wanted to portray events as they happened. The obvious first problem is that we don't know what happened or what exactly led to the capture of UBL (Usama bin Laden). That information is classified (making Bigelow's claim that these attacks "might be more appropriately directed at those who instituted and ordered these U.S. policies, as opposed to a motion picture that brings the story to the screen" all the more problematic—this is not a documentary). The second problem is that Bigelow didn't simply depict torture as something that happened. The information that eventually leads the CIA to UBL's location is acquired through torture. Whether this is actually what happened or not (this is not a documentary), the movie's position is clear: torture lead to the capture of UBL.

We can easily imagine a movie where this is not the case. Maya (the protagonist) perhaps tortures detainees for a portion of the film while following leads she suspects to be more fruitful. Or she becomes frustrated with the unreliability of the information obtained through torture and pursues other methods of intelligence gathering. Or she plain gets sick of torturing detainees. But this is not what happened (in the film—this is not a documentary).

One thing I did like about the torture in Zero Dark Thirty was the brutality of its depiction. This is probably enough to turn the casual moviegoer away, but for me it was a more than welcome break in the film's otherwise problematically ideological portrayal of the military. This is of course nothing new for Bigelow: The Hurt Locker (2008) was also an amazing movie hindered from excellence mainly by its ideological underpinnings. The problem for me was that after we see how terrible the torture is, we also see that it works (this is not a documentary). If anything, the fact that information obtained through torture leads to the capture of UBL after the film attempts to disavow the strength of torture as a means of intelligence gathering makes the film even more ideological. The point of ideology is to not witness its functioning, so portraying the military negatively (through the brutality of torture) helps you to ignore the rest of the movie where the military is unconditionally celebrated.**

What also interests me on this point is a similar contradiction between Bigelow's stated intention and the actual filmic diegesis. In her response to the attacks on the film's position on torture, Bigelow responded that the film shows that UBL was found through "ingenious detective work". In the movie, however, Maya seemed to me oddly confident in the intelligence she gathered at the beginning of the film (via torture). I argued in my analysis of BBC's Sherlock that the key to a good detective is paranoia, not conviction. Paranoia leads you to weigh all options evenly, while conviction leads you to eliminate certain possibilities outright. Don't get me wrong, Maya is one of my favorite characters from recent movies for being a strong female protagonist who can get what she wants in a man's world. Her confidence in the information she gathers very early on in the film as well as her perseverance leads to the capture of UBL (this is not a documentary). She's amazing, but she's not a detective.

As for the film's mise-en-scène, it was incredible. Bearing a striking resemblance to The Hurt Locker, the film was beautifully shot & staged (I'm not sure how much if any of it was shot on location, but there are few moments where you're obviously on a set), and the acting was all top notch (except for maybe Kyle Chandler*** shouting "PROTECT THE HOMELAND" at Jessica Chastain). The pacing was pretty well done and I found myself engaged with the movie for all of it except portions of the second act where time probably could have been telescoped a bit more to focus on the juicy bits. I especially loved the final 30-45 minute action sequence at the end of the movie where the strike team finally goes in to capture UBL. The camera cross cuts between the forward team and the backup so as to maintain the tension without drawing the scene out.

I have some final things here in my screening notes that I don't feel need to be elaborated on but which were nonetheless interesting in one way or another. Maya's vengefulness towards Al Qaeda silently mirrored Al Qaeda's (mostly undepicted) vengefulness towards the US. This is something the movie never talks about, and the closest we get to seeing things from the Pakistani side of things is a brief drive through a crowd with protesters holding up signs reading "Stop American Terrorism". I liked the potential of these protesters very much but they are passed by without a word or second glance.

I also have repeated in my notes the line "It is so not okay". US soldiers kill some Pakistani children's parents and in order to get the children to remain calm they repeat "it's okay" to them. It is very much not okay what you just did. So there's that.

Four beers for being mostly enjoyable with a little lag in the middle, and two Zizeks for having a strong female protagonist but being otherwise ruthlessly ideological.

**The fact of the film's ideological endorsement of the military also makes the one moment in the movie where characters happen to mention the word ideology (of course in reference to the Muslim other; we're not ideological, it's them) painfully ironic and cringe-inducing.

***Coincidentally Kyle Chandler is also the victim of bad dialogue at the end of Super 8 (2011). No significance here just... I dunno maybe get some better writers or something.