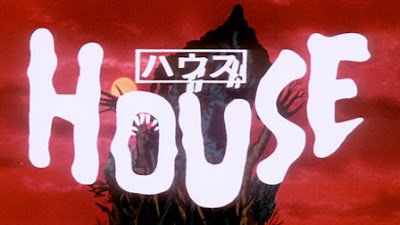 This is a review of House the 1977 Japanese "horror" film, not the TV medical drama.

It is incredibly difficult to communicate with words what watching House is like (so look forward to lots of pictures and animated gifs—speaking of which, if you're running Google Chrome and don't have Hover Zoom yet go install it now). At its most basic level the movie is kind of like if Evil Dead had been weird and surreal because it was trying to be (instead of because it had a tiny budget), but there's so much more to enjoy than just that. Part of the magic of House I believe comes from the fact that producer/director Nobuhiko Obayashi's daughter provided the inspiration for many of the scares in the movie by sharing her childhood fears (as opposed to movies that are weird and surreal because, for instance, the director took too much acid or something). But before I get too far into what I liked about the movie, let's just get a baseline level of plot information.

Since, as I said already, the movie's tone/feel is so hard to communicate through words alone, I'm going to steal something I saw in someone else's review of the movie and encourage you to play this song (the movie's main theme) on repeat while you read. I personally have a hard time reading with music playing, so if that's the case I completely understand, but you should at least listen to the song once to try and get a feel for the movie's playful ridiculousness.

Anyway, the movie starts with the standard haunted house setup: seven young girls decide to spend their summer vacation at the main character's aunt's house (the reason for this is hilariously Freudian but I'll get to that later) which of course turns out to be haunted by the spirit of the dead aunt and the girls proceed to die off one by one. The setup and barebones plot progression, however, are pretty much the only normal things about this movie. To start with, the girls' names all correspond to their character types: Gorgeous (the pretty one), Fantasy (the overly imaginative one), Melody (the musically-talented one), Mac (the one who loves to eat), Kung Fu (the one who knows kung fu), Prof (the book-smart one), and Sweet (the nice one). The characters never deviate from their given type with the exception of Gorgeous, the protagonist.

The way most of the girls die is even dictated by their character types (get ready for some pictures here) but with awesomely surreal and nightmarish twists. Mac's head is turned into a watermelon which bites Fantasy's butt and then is (unknowingly) eaten by the rest of the girls. Gorgeous is almost killed while taking a bath—also this happens to her and she becomes the new possessor of the house. In one of my favorite moments, Melody is killed (eaten might be a better word) while playing piano by the piano: first it chops her fingers off, which continue to play the piano, then it bites one of her hands off, and finally eats her whole. Kung Fu is killed in a battle with possessed household appliances but her legs (autonomously) manage to kick a picture of the house's cat which begins violently spurting blood which then floods the room and drowns Prof while she attempts to read the dead aunt's diary. Seriously. These things actually happen. I'm just so glad this movie exists.

If you couldn't tell already, the effects are interesting in how obviously faked they feel. Obayashi did this on purpose because he wanted the effects to seem unrealistic, but who cares what he was trying to do? It turned out phenomenally. Look, everything sparkles. While watching you'll probably find yourself thinking, "Hey, maybe I am watching a regular kids movie. Or, maybe a Sgt. Pepper's-era music video? Wait, is this a poorly photoshopped Rocky Horror knock-off? WHAT'S EVEN HAPPENING HERE?!" Yeah. The green-screening is terrible, the sound effects are laughable, the visual effects are obvious and comical, and I absolutely wouldn't change a single thing. If I haven't sold you on the film yet, here's Bill Hader to convince you that it should be the next movie you watch (also listen to him talk about Salo if you click that link, he's hilarious).

Okay, so all you readers just here for the pretty pictures can leave now (also, if you had the music playing in the background you can turn that off now). I'm gonna shift gears and talk about why the girls go to the house in the first place. From what I can tell, Gorgeous takes her friends to the house because she wants her father all for herself. (On a similar note, David Cronenberg's Spider (2002) has a similar setup simply inverted for a male protagonist but with a much more serious tone, so if you're interested in these sort of tensions definitely give that movie a look.)

At the start of the movie Gorgeous's plan was to go with her father to some special vacation spot, but her father comes home with a new stepmother for her. She storms off to her room (jealous; disappointed) and looks at pictures of herself and her father. This theme of unrequited love continues when they get to the house. The aunt's spirit haunts the house because she died waiting for her lover to return from WWII (and the genuinely creepy final words of the movie are "the only thing that never perishes, the only promise, is love"). At the end of the film, Gorgeous's spirit is haunting the house. Whose love did she die waiting for? Her father is the only male character she interacts with (and one of only three male characters in the movie along with an overweight watermelon salesman and a comically inept teacher) and the only person it would really make sense for her to love (especially given the movie's opening).

Viewing the movie through this lens turns it into a story of feminine jouissance similar to (but not nearly as frightening as) Kim Jee-woon's Tale of Two Sisters (2003). The girls are subjected to the aunt's deadly, horrifying jouissance which takes the form of the various scares in the movie. The last words of the movie function as Gorgeous's promise that she will continue to unleash her own jouissance on future guests of the house. For those of you not well versed in Lacanian terminology that might not make very much sense, and maybe I'll write a full-length analysis of movies like this in the future, but for now you basically have to trust me. If you watch the movie with the idea in mind that Gorgeous is (basically) in love with her father the film's creepy undertones begin to show through.

Is this movie for everybody? Certainly not. The movie is occasionally visually overstimulating (something I've established I don't have a problem with) and is surreal to the point of feeling like an experimental film. But if you like horror comedies this is one of the best there is (if not the absolute best) and definitely deserves its cult following.