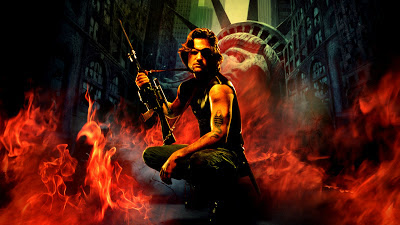 A couple months ago a good friend who's made a few other appearances on this blog recommended that I watch John Carpenter's Escape from New York (1981) and Escape from LA (1996). Since then John Carpenter has become one of my favorite directors, but these two movies in particular hold a special place in my heart. They really need to be seen together to be fully appreciated, but for the moment I'm only going to discuss the first. Escape from New York is part post-apocalyptic adventure thrill ride, part campy cult classic, and (most importantly for my purposes today) part anti-hero political commentary.

Anyone familiar with Carpenter's work knows that he's a master of the B-movie aesthetic and this film is no exception. The over-the-top 80's style, the limited special effects, the ridiculous dialogue, and even the plot itself (Kurt Russell is forced to participate in a to-the-death gladiator match with a much larger man where they use spiked baseball bats as weapons and trash can lids as shields) all come together to create an atmosphere unique to Carpenter's work. While Escape from New York is clearly influenced by the disaster and post-apocalyptic genre films of the 70's, what results from these kernels is something quite its own.

Part of what I love about this movie is the silly Freudian overtones. Kurt Russell plays Snake Plissken, a one-eyed war veteran turned bank robber. He delivers his first line of the movie in a guttural, nonchalant whisper: "Call me Snake." The one-eyed Snake is literally demanding to be recognized as the phallus. His mission is to restore the patriarchy by rescuing the President from the queer Duke of New York (a man who gives what seems to be the only woman in New York to one of his lackeys to make him happy, keeping at his side instead one of the weirdest characters in the movie, Romero). But this surface reading, however enjoyable, is not only insufficient but backwards. 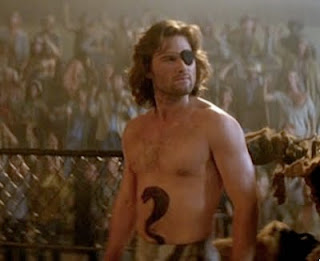 The reason Escape from New York is important today is that it exposes the lie of the proliferation of superhero genre flicks overflowing from every cinema with a mind towards profit. Here's the problem with the majority of superhero films as Todd McGowan* sees it:

The fundamental contention of the superhero film (and its comic book source) is that the law alone is not a sufficient condition for justice. Under even the most benign historical circumstances, injustice is more powerful than justice, and as a result, justice requires an exceptional figure who operates outside or on the periphery of the law. This figure, the superhero, goes where the law can't and accomplishes what it can't. (123)


McGowan's mention of an "exceptional figure" is a reference not to the exceptional strength or intelligence of the superhero character, but instead to its status as an exception from the law. The law in these movies is not applicable to the superhero, rather the purpose of the superhero is to accomplish things that are impossible without going outside the law (killing, entering areas without a warrant, etc.). When limited to the superhero, this state of exception appears benign enough: he's a good guy and isn't going to abuse his power. The problem, however, is a structural one with the law itself and not per se with the superhero. McGowan continues (with reference to Giorgio Agamben):

The declaration of the state of exception attempts "to produce a situation in which the emergency becomes the rule, and the very distinction between peace and war (and between foreign and civil war) becomes impossible." The problem is that the exceptional time never ends, and the disappearance of the distinction between an emergency and everyday life pushes the society toward a state of civil war that the very exception itself was supposed to quell. Rather than acting as a temporary stopgap for a society on the brink of self-annihilation, the state of exception actually pushes the society further down the path to this annihilation. (129)


The problem with the majority of superhero movies is that they accept without question the exceptional status of the superhero. The exceptional hero is embraced because there's trouble afoot and he seems the only way to solve it, but for the most part no thought is given to the impact this has on the law itself. So what does any of this have to do with Kurt Russell and Escape from New York? 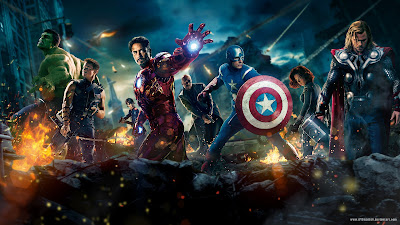 McGowan argues that Christopher Nolan's The Dark Knight stands apart from these politically conservative superhero flicks because Nolan's Batman recognizes his status as exception and adopts this status as a criminal duty. I would like to show how Escape from New York similarly exposes the criminality underlying the state of exception. Both in Snake's refusal of the hero position and in the film's presentation of the law in the form of the militarized government, Escape from New York presents a superhero-like narrative that critiques the hero's exceptional position.

Unlike most superheroes (again coincidentally excluding Batman here), Snake Plissken has no superpowers other than being the film's resident badass. He's called in by an excessively militarized government to rescue the President along with a tape he's carrying (which supposedly contains the key to "the survival of the human race") seemingly because he has an impressive military record (so he can handle the potential violence) and has become a criminal with nothing to lose. The government needs Snake because the President crash landed on Manhattan island, which in the future of 1997 has been converted into a giant maximum security prison (à la Guantanamo Bay), and the group who captured him threatened to kill him if the government sends their own agents to retrieve him. Snake is chosen against his will as the exception (he is allowed to do anything so long as he returns the President safely) necessary for the law's continued existence.

Also unlike most superheroes, Snake has no overarching ethical guidelines. He goes along with the plan initially because the government is going to give him a plane which he apparently plans to fly away to freedom once released. Unfortunately his plans are foiled when microscopic explosives are injected into his veins which will explode in just under 24 hours unless deactivated (which, of course, they will only do if he succeeds). He is forced to undertake this mission of which he has no interest ("I don't give a fuck about your war, or your President") not for the greater good, but in order to keep himself alive. Snake is thus more of a super anti-hero, further working to criminalize the state of exception which he is forced to occupy.

Recognizing the unjust and unlawful position into which he has been placed, Snake performs an interesting and initially (for me at least) confusing action at the end of the film. After rescuing the President, he destroys the tape the President was carrying (replacing it with one found in New York). I originally thought this turned his character into a villain instead of an anti-hero. However, the only thing we (and Snake) hear from this tape ("—the discovery that tritium creates only one one-millionth of the biological damage of iodine one—") makes it sound a lot more like the secrets to some new biological weapon than the key to survival. This realization makes Snake's actions more understandable since he is preventing the continued smooth functioning of the corrupt government and not simply causing the supposed annihilation he was sent to prevent.** 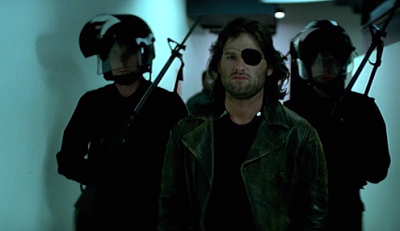 There are a couple more details which foreground the criminality of the state of exception and help constitute the universe of Escape from New York. The first, and my personal favorite, is the fact that there are no shots in the film set anywhere other than within a military/government base of operations or on the prison island that Manhattan has become. There is literally no world outside this evil, unjust law and its exception.  The second is the way the tyrannical Duke of New York mirrors the fascist President of the United States. There's a wonderful scene where the Duke has the President tied up to a wall and is shooting at him forcing him to repeat the phrase, "You are the Duke of New York! You're A-Number One!" Then at the end of the movie the President viciously guns down the Duke screaming, "A! Number One! You're the Duke!" clearly enjoying too much his restoration to the seat of power.

This critique of fascism and the state of exception is continued in John Carpenter's sequel, Escape from LA, albeit in a more parodic manner. The sequel is just as enjoyable as the original, and if you like one you really need to see the other because (as with many such pairings) the whole is much greater than the sum of its parts. Maybe someday I'll get around to writing an analysis of the sequel (or maybe somebody will write it for me), but for now this is all I have to say about Kurt Russell's Snake Plissken and John Carpenter's wonderful dystopian future.

*All quotations are from his wonderful book, The Fictional Christopher Nolan, specifically the chapter on The Dark Knight. If you consider yourself a Nolan fan you should really go buy this book.

**EDIT: In his article at Post-Apocalyptic.com, Bill further analyzes this situation with reference to the novelization of the script (read his full article here):

It turns out that the war that's only briefly mentioned in the movie is actually a full-fledged World War 3 being fought between the United States, Russia and China. Early on, they decided to keep nuclear weapons out of the fight to protect the non-combatant countries, and instead agreed on the use of chemical weapons on a large scale. Of course, things don't go as planned, and clouds of gas circle the planet killing brain cells and causing those affected to go crazy.
...
And the special message on that cassette tape that the President is trying to get to the Summit? To say it's about nuclear fusion is a bit of an understatement. I think it adds a lot to the movie to know that the United States has developed what's described as radiation-free thermonuclear bombs, and the President intends to demand an immediate surrender or he'll use those new bombs on our enemies.