Everyone knows that Alfred Hitchcock (the master of suspense) made some of the finest films of his generation, and film majors like me have likely been forced to watch many of them. You've probably been told (like I was) that, regardless of whether or not you actually enjoyed them, they were the best films you'd ever seen. Specifically I had this problem with Vertigo (1958): while I love James Stewart and particularly enjoy the (slightly laughable) dream sequence, Vertigo isn't exactly the first movie you'd find me watching in my free time (the awkward tension as Jimmy Stewart makes up Kim Novak to fit his fantasy is rather difficult). But these are "good" movies, right? Some of them have to be fun. So for the sake of those trying to get into classic film, or even just looking to have something intelligent-sounding to talk to film friends about, I decided to put together a list of Hitchcock films I don't think are technically or artistically his best, but which are simply fun to watch.

So here's something really obscure with which you could try to impress your friends. The Strange Case of Mr. Pelham was an episode on Alfred Hitchcock Presents and one actually directed by Hitchcock himself (a bit of a rarity especially after the first season). While I would recommend you watch just about any of the episodes of this often overlooked classic show if you enjoy Hitchcock's style of suspense, this one is my favorite. Mr. Pelham is being impersonated by someone who not only looks, dresses, and sounds like him, but also somehow knows every intimate detail of his life. One scene in particular where Pelham calls his own home and he (his impersonator) answers is especially enjoyable. If you want to do a sort of Hitchcockian test drive this might be just the thing for you.


Number Five: Strangers on a Train (1951)
Starring: Farley Granger, Ruth Roman, Robert Walker
Hitchcock appears: carrying a bass onto the train as Granger is getting off
(Black & White)

Strangers on a Train is the story of a famous tennis player Guy (Farley Granger) who meets, well, a stranger on a train. This stranger Bruno (Robert Walker) read in the news that Guy's marriage was less than perfect and wants to "exchange murders" with him: he'll kill Guy's wife if Guy kills his father. Robert Walker is really the strongest selling point for me of this slightly strange tale. His sinister, conniving Bruno is easily one of my favorite Hitchcock villains. His drive, his refusal to give up and just go away in the face of Guy's refusal and even his own immanent death is truly terrifying.

Of course in most of Hitchcock's films the camera work is great, but Strangers on a Train has one of my favorite single shots in his oeuvre: the murder seen in the reflection of a pair of glasses (pictured above). Something about this shot not only is simply beautiful but also evokes the nature both of cinema and of how we experience trauma. Toward the end of the movie there's also a wonderful scene crosscutting between Guy trying to finish a tennis match and Bruno trying to reach a lighter he dropped down a drain. Explaining the situation here would spoil most of the movie so just take my word for it: the tension it creates is fantastic.

Also if you're looking for a more theoretical approach to this movie, check out Lee Edelman's wonderful book No Future.

Hitchcock appears: outside the office at the beginning in a cowboy hat
(Black & White)

Anthony Perkins. What can I say? This is the kind of performance that defines a career for better or for worse. While Perkins did have a large part in Orson Welles's The Trial (1962) shortly after, he did little else of any worth as far as I know (does The Black Hole count?). While Norman Bates isn't the most downright frightening character you'll ever see in movies or on TV, he has far more depth and is much more real than Freddy Krueger, Jason Voorhees, or Michael Myers.

While Psycho is known for the infamous shower scene, my favorite scene is the one immediately following where Norman cleans up the mess created by his mother (especially the second time through or after the twist has been spoiled). The dedication of the son to his mother, and on a slightly different level the painfulness of the split nature of Norman's identity (as well as the simple pleasure of removing a stain, as Zizek notes in Pervert's Guide to Cinema) are both wonderful and terrifying.

There are some more minor reasons I love this movie—Marion's internal monologue externalized in voice-over as she runs away with the money, the creepy police officer that interrogates her as she tries to escape, Norman Bates's mother's skeleton and 30 Rock's amazing reference to it—but the movie wouldn't be nearly the same without Anthony Perkins's unique brand of crazy.

Hitchcock appears: on a bus sitting next to Grant
(Technicolor)

Alright, finally here's something in color for all you who can't stand black and white, and boy does the color shine in this one. For those who don't know, Technicolor was a post-production process that could either make or break a film, and it really works for To Catch a Thief. Scenes like the one pictured above, as well as some of the rooftop scenes, are absolutely stunning. But where there's style there's not necessarily substance and this movie absolutely delivers both.

Cary Grant as John Robie, aka The Cat, makes this movie feel like a prequel to the James Bond legacy. He plays a robber who's given up his evil ways and is trying to help the police (undercover, of course) catch the French Riviera's buglar du jour: a copycat killer who imitates Robie's methods. He seems a natural choice for the job, but when the very jewels he was hired to protect go missing he gets in deeper than he planned.

There's also some great dialogue in this movie (my favorite line is when Grace Kelley walks in on her mother clearly trying to cover something up and says in that wonderfully airy voice of hers, "Mother, that book you're reading is upside down"), and Jessie Royce Landis and John Williams really shine in their respective supporting roles. A slightly less known Hitchcock mystery thriller, give it a chance if you're looking for something new. 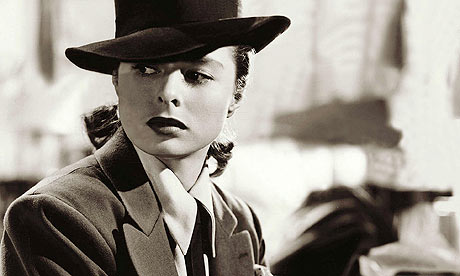 If it's not obvious yet I have a bit of a man crush on Cary Grant, but he's not the best actor in Notorious. That prize goes to the illustrious Ingrid Bergman. Here she plays the daughter of a Nazi who Grant recruits to work undercover as a spy investigating Claude Rains (another Nazi), but things get complicated when Bergman and Grant fall in love and it turns out Rains was a previous paramour of hers. With anyone else this love triangle might feel dried up and derivative, but these three, and especially Ingrid Bergman, really make it work.

Another place Bergman stands out is in one of the exposition scenes late in the film (spoilers ahead). She's been staying with Rains and his family but they know she's an undercover spy and are slowly poisoning her. A friend of Rains (and someone who's working with him in his secret plot) is visiting and accidentally reveals the last piece of information Bergman needs not knowing of her treachery, and then accidentally reaches for Bergman's (poisoned) drink instead of his own. The tension here is so great and Bergman and Rains pull it off effortlessly.

The last thing I have to mention with regard to this film is the shot that makes film critics call this a turning point for Hitchcock's cinematography. The camera opens as a wide and high establishing shot on a party held at Rains's mansion and then zooms and pans down to an eventual extreme close-up of a key tucked into Bergman's hand. Here we get the entire scene in one shot: Claude Rains is throwing a party for his partners in crime and Ingrid Bergman is going to use this opportunity to attempt to discover his secret while he's distracted. Brilliant. 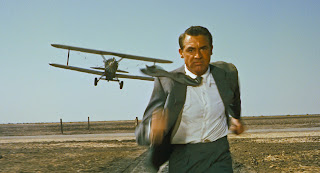 Where do I start with North by Northwest? At its heart it's a combination of two typical Hitchcock plot trajectories: a wrong man/mistaken identity combined with a macguffin mystery. Roger Thornhill (Cary Grant) is mistaken for George Kaplan, a government agent. While trying to rectify the situation he falls in love with a real agent Eve Kendell (Eva Marie Saint) and gets involved with her mission to investigate Phillip Vandamm (James Mason) and his lackey Leonard (Martin Landau). The combination works wonderfully and all the characters are fantastic with Martin Landau being (appropriately) one-sided and Eva Marie Saint playing a refreshingly strong female lead.

So many of the scenes are so great I'll just start from the beginning. The first time Vandamm gets his hands on Thornhill/Kaplan he has Leonard force feed him an entire bottle of bourbon and then sticks him in a car pointed at the ocean. What follows is a well shot (considering it's all staged), well acted (considering Cary Grant is probably sober), and generally hilarious drunk driving scene that ends with Thornhill in jail on the phone with his mother.

Then there's the iconic escape from the crop-duster (pictured above). This was a technical breakthrough at the time and even today it doesn't look terrible. Organizing this scene took real genius and for a detailed breakdown of the scene check out this (short) article over at ritholtz.com.

Next is my personal favorite. Thornhill is at an auction with Vandamm who has the exits blocked. Thornhill decides he'd rather leave in the hands of the police than Vandamm's thugs and starts making nonsensical bets. The cops arrest him and Thornhill escapes, thanking the befuddled officers, and the audience (you) gets a solid laugh.

The final scene isn't so much a whole scene as a shot and I guess technically spoils the ending, so skip this paragraph if that sort of thing bothers you (surprise! in the end Cary Grant and Eva Marie Saint get together). So yeah, Thornhill and Kendell get together, and as they hop into a bed on a train home the movie cuts to the train entering a tunnel. Apparently Hithcock refers to it as "one of the most impudent shots I ever made" (Hitchcock / Truffaut 107-8). All I know is I freaking love it.