So, if you weren't aware, there's this thing called the Bechdel Test created in 1985 by Alison Bechdel (in the comic strip above) for the purpose of some culturally-aware humor and since used by film critics to evaluate gender bias in film (and other media apparently—thanks Wikipedia!). In order to pass the test (if you didn't read the comic) a movie must (1) have two named female characters in it who (2) have a conversation about (3) something other than a man. Pretty simple. The problem is that according to bechdeltest.com, only about half of all films pass (the website definitely leans more toward American movies but certainly doesn't exclude foreign film). So what does this mean?

Well, obviously it means there's a predominance of male-centered film being produced, at least in America. Also, since about half of the films that fail the test do so because the two named women who have a conversation are talking about a man, it means that as a country we tend to define our women by their relationships with men. But despite the simplicity of the test, the situation really isn't that simple. In the same way that generalizations can be accurate on a large scale but become problematic applied to single cases, the Bechdel test has a few problems.

The goal of the test applied on a small scale seems to be to find movies like Hanna (2011) or The Hunger Games (2012) which have strong, deep, and well-rounded female protagonists. Hanna has conversations not on the topic of men with Sophie, Marissa, and Rachel, while Katniss talks with her mother and sister as well as a couple other female characters. One of my problems with the test is that these conversations aren't what makes the movies or their main characters great. So even when the test does work (it succeeds in identifying feminist films), it does so for the wrong reasons.


Another problem with applying the Bechdel test on a case-by-case basis is that it will actually fail films with strong feminist overtones simply because their protagonists don't talk to other women. The most commonly discussed example of this is the film Run Lola Run (1998). Lola is a very well-developed character that manages to avoid falling into the trap of common stereotypes. More recently there was also the example of Gravity (2013), a movie which clearly revolves around a complex female protagonist but fails the test because there are no other girls for her to talk to.

In a similar vein, there's the case of Zero Dark Thirty (2012; my review), a movie which fails because the conversation between the two named female characters revolves around Osama Bin Laden (a man). There are many other movies like this (2010's Salt, for instance) which fail not due to the presence of gender bias, but because they are movies about women working in a male-dominated profession or simply living in a world structured around men (most women's reality, ironically enough). The problem, the reason these films fail the Bechdel test, is not that they're antifeminist. It's that their characters don't chat with the right people about the right things.

On the opposite side of things, there are quite a few movies which pass the Bechdel test but which are clearly movies for or about men (if not also downright misogynistic). A somewhat inoffensive example of this is The Bourne Legacy (2012), which passes the test because of the scene where Dr. Shearing (Rachel Weisz) is psychologically interviewed by Dr. Dowd (Elizabeth Marvel). The film is, nonetheless, clearly a film about men. It doesn't negatively portray women, it just doesn't really portray them at all (or at least give them any depth—they're simply assistants to Aaron Cross). 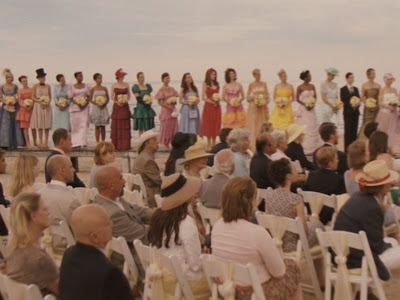 My favorite example of this, of course, is 27 Dresses (2008). I've already discussed what I refer to as 27 Dresses syndrome in my review of Silver Linings Playbook (which also passes the test, in case you were curious). While Jane and Tess have a few conversations about things other than men, this movie is hardly an ideal picture of femininity. Jane's life is falling apart and the only way she manages to get it together is by finding the right man who magically puts it back together for her. I mean, the movie is named 27 Dresses after the 27 bridesmaid dresses she's kept from all the weddings she's been to. Jane's entire character is structured around her obsession with heteronormative relationships instead of actually being, you know, a human being.

Well, there you have it. I still believe the Bechdel test is an interesting tool for looking at the state of the film industry. I just don't think you should go around judging the quality of individual movies based on whether they pass or fail the test. Like anything important, the issue is too complicated for reductive analysis.

A couple of sidenotes before I go. Aymar Jean Christian also wrote a great article on the problems of the Bechdel test for Televisual, so check that out if you want to read more (bechdeltest.com, which I mentioned earlier, is also a great resource). Also, there's something called the reverse Bechdel test (whether the film has two named male characters who talk about something other than women), the point of which is to fail. Many fewer movies succeed in this regard (i.e. they fail the test), but that doesn't make the test more accurate at determining whether or not a film has gender bias. It succumbs to the same weaknesses as the original test.
27 Dresses Bechdel test Bourne Legacy cons feminism film criticism film theory Hanna pros reverse Bechdel test Run Lola Run Salt The Hunger Games Zero Dark Thirty