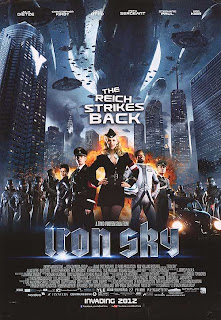 Next up in our recommendation series, we have Iron Sky which happened to be suggested nearly simultaneously by the great Daniel Spicer as well as my friend Andrew, so a big thank you to them. I'm so glad they brought this movie to my attention because it's exactly where my head's been at recently. This is a comedy science fiction from Finland, and, to be frank, it is very, very silly. I wasn't confident I would like this going in since the genre combination was sort of too good to be true, the trailer made it look like it was trying too hard, and, well, you can never really trust the Finnish, can you? But Iron Sky had me giggling to myself before the credits even began. If you were unaware, the movie is about Nazis who traveled to the moon at the end of World War II and who have been living there ever since, planning their invasion of Earth. Yep. Moon Nazis. But it's more than just a hilarious premise, there's political satire throughout (mainly aimed at the United States) which works rather well with more parallels than differences between the Americans and the Nazis.

The biggest problem I had with Iron Sky beyond the occasional mediocre acting was the ending. After over an hour of playful caricature, the tone shifts from lighthearted and fun to gloomy and judgmental. After so much parody the filmmakers felt like their message still had somehow not gotten through. You don't need a serious tone to send the audience a message. Dr. Strangelove, probably the greatest political satire of all time, has an incredibly bleak ending (spoiler alert: everyone dies) but manages to deliver the apocalypse on a silver platter. Now I'm not saying every politically minded comedy has to live up to Dr. Strangelove (I would constantly be disappointed), but the preachy finale cast a shadow over the otherwise successful humor in the rest of the movie.

Final Notes
- Knowing that the movie was made in Finland is actually important for one of the jokes. There's a scene in some sort of United Nations-type building where everyone admits to illegally arming their satellites except Finland. Boom.
- The people working in the editing room seem to have come from the Zack Snyder School of Making Your Movie Look Like a Graphic Novel. I don't know what they're doing in post-production, but it does end up looking pretty cool.
- The reason I was giggling before the credits started.