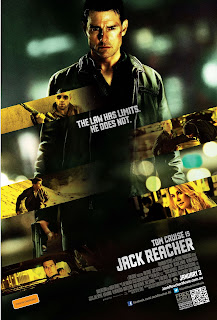 The first word that comes to mind is "disappointing". Jack Reacher isn't a bad movie, it's just not great, and there are so many more movies out there in this genre that are doing it better. In the interest of full disclosure, I did go into this movie thinking it would be an action movie when it's more of a detective mystery. Maybe this is my fault, but not only was it marketed as an action movie, it also doesn't do all that well as a detective story anyway. There's a lot of excess that could have been trimmed which makes the movie feel slow or boring at times, and on the other hand there are some scenes that could have been added to make the story feel more complete and to make the antagonist feel more menacing. Where there is action it's well executed and will get your heart going, and some of the atmospheric police procedural stuff works, but the ending feels a bit abrupt and some of the story's loose ends aren't tied off effectively. Otherwise the acting is solid and I think if it had simply been rearranged a little it would have worked better.

Then there's the character Jack Reacher. He's basically a superhero in the sense that he occupies the same role as the figure of the law outside the law. He's essentially what Giorgio Agamben would refer to as the state of exception: he's the (generally violent) underside of the law which is necessary to bring about justice but which the law must disavow to keep up its image. (For more on the state of exception check out my analysis of Escape from New York—the basic thematic structure is also played out pretty thoroughly in The Dark Knight) The problem with this is that in the movie Reacher's morals seem to come and go. There are some scenes that just don't make a lot of sense to me. There's one scene in particular where he willingly gets into what's basically a bar fight and seems to enjoy beating the snot out of the guys a little too much. The movie definitely needed a good action sequence as the movie was starting to slow down, but it should have been done differently. The lack of closure in the film's finale is also problematic here: if Reacher cares about justice, he doesn't seem to do a whole lot to try to uphold it. The underside of the law isn't supposed to be pretty, but it should at least have some sort of cosistent ethical code.

Final Notes
- The sound design and soundtrack were both top notch in my opinion, especially at the very beginning. The opening also used the presence or absence of Foley in what I thought were some unique ways.
- The final fight scene between Tom Cruise and the sexy Jai Courtney feels more like a romantic encounter than an epic showdown (filmed in the rain & everything).
- There's a shot that breaks the 180 degree rule. You've crossed the imaginary line.