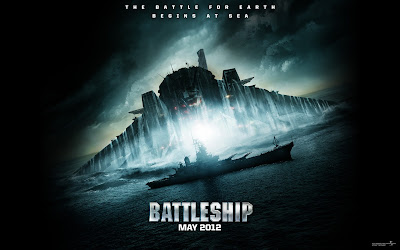 Yes, your eyes are functioning properly. Today I'm reviewing Battleship (2012), and I'm not even doing it close enough to its release date to ride the wave of excitement and resentment. Evan suggested I check this movie out, and he has a solid track record of recommendations (both An Education and A Boy and His Dog) so I decided to put aside my skepticism and give it a try. My expectations were still pretty low despite the kind word from a good friend. I mean, it's a movie "based on" ("inspired by" would be a more accurate description) the kids' game originally from Milton Bradley (acquired by Hasbro in 1984), and it was nominated in 2012 for six Razzies including Worst Picture, Worst Director, and Worst Screenplay (Rihanna won Worst Supporting Actress for her role). So you'd think it must be pretty terrible, right? Surprisingly I found that Battleship was not only not the terrible flop I expected, but was actually slightly above average.

The story opens with two brothers, Alex and Stone Hopper (Taylor Kitsch and Alexander Skarsgård respectively), as the latter forces the former to join the Navy in order to get his life together. Fast forward to the present, and the navies of 13 nations (Japan being the only one featured prominently) meet in Hawaii to partake in some war games and show off their countries' skills. Unfortunately there are some unexpected guests. See, it turns out that NASA had been beaming a message into outer space inviting any extra-terrestrials to visit Earth on their next vacation or honeymoon, and they finally decided to answer the call. But they're not peaceful, Close Encounters of the Third Kind aliens. They're Christopher Columbus, and we—well we're America.

The problem is that the aliens' communications ship crash landed somewhere on the other side of the planet, so they need to commandeer the very signal used to contact them in order to phone home for reinforcements. So they set up a force field around Hawaii (where the satellite communications center is) and get to work while the Navy puts their war games on hold to engage this frightening new enemy. There's lots of fighting and stuff and it all builds to the one inevitable moment where they basically have to play Battleship to kill the aliens. The most interesting thing about the plot for me is that, if you remove all the nonsense about aliens attacking Earth and whatnot, the central emotional tension & development is just about how this guy doesn't have the nerve to ask his girlfriend's father's permission to marry his daughter. At its core it's just a movie about courage.


Alright, before you run away thinking I only like this movie because it's a bit ridiculous and silly, let's talk about all the regular-people things I liked about Battleship. My favorite technical aspect of this movie is actually its phenomenal sound design. While this may seem like a small thing, it really adds to the overall feeling of the movie and helps create an immersive world, something especially important in science fiction. On the topic of sound, the soundtrack is a very effective mix of classic rock and more contemporary electronic music (its use of Thunderstruck is awesome). The special effects team also did a great job making everything very detailed and kinetic, clearly taking a page out of the Michael Bay Handbook on How To Make a Movie that Looks Like Transformers (while there is a producer on board who worked on the Transformers movies, from what I can tell most of the visual effects crew are new to this technique—the visual effects supervisor actually worked most recently on Star Trek, Avatar and Elysium).

The movie basically occurs through a three way crosscut between Taylor Kitsch on the frontline, Brooklyn Decker running recon, and Liam Neeson back at headquarters. This method helps build tension simultaneously in each of the plot threads, and while Neeson's section could have used a little more screen time, it works rather well on the whole. There's also a negligible amount of exposition after the opening scene which will leave some filmgoers in the dark about too many things, but for the rest will create a sense of mystery and heighten the movie's suspense. To this the director applies just the right amount airy, cute humor to cut through the tension and keep the tone light.

Battleship plays with a large collection of sci-fi movie tropes, with the majority of them coming from the popcorny side of the genre. The movie's closest resemblance is easily Battle Los Angeles, and as I mentioned above it takes several visual cues from the Transformers reboot. From there the film combines the military sensibilities of Top Gun and The Abyss with the structure and anxiety of Independence Day and The Terminator. While I don't think it has the staying power to become a classic like any of those four, it certainly outperforms its modern reference points.

Is the movie perfect? Certainly not. The movie's biggest failure for me was introducing a mind meld-like ability for the aliens and then not using it for the rest of the movie. Its themes and symbolism are pretty limited to "yay military" and "boo women" (Rihanna is forgettable and Decker is just an object for Kitsch). The acting is all pretty mediocre and—Hasbro inspiration aside—the movie is far from original. There are also a few moments of logical incongruity, like when Kitsch, after being appointed captain, continues to do all the grunt work. I'd place Battleship about on par with Prometheus in terms of quality, although personally I enjoyed that movie more because, you know, Alien universe.

Alright, is that enough? Can I talk about how wonderfully silly and ridiculous Battleship is? Okay whatever here goes:

The entire movie is basically one long build-up to two hilarious visual punchlines. First there's when Kitsch and what's left of his crew actually play Battleship in order to fight the aliens. The way the film opens with naval war games is also brilliant misdirection for those few in the audience who would expect this kind of thing. Then, after winning their game of Battleship, the crew boards an antique battleship, mans it with war veterans, and pilots it to victory. The fact that the vets are in town for the war games that begin the movie, the music that plays during the scene, and the way the director executes the reveal are all over the top and absolutely amazing. Then, on a slightly subtler level, there's the fact that the alien weapons seem to be modeled on the damage markers from the original Battleship game. Whoever thought of that, thank you.

So, am I going to buy Battleship for my collection? Maybe not. Would I watch it again? Pick a night and I'm there.