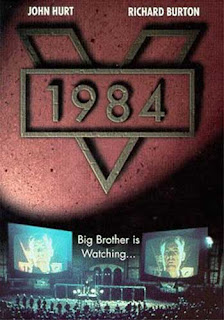 So I recently finish listening to an audiobook version of George Orwell's Nineteen Eighty-Four. I had a long drive, and, in the wake of the Snowden leaks and all the NSA surveillance nonsense, I was curious how many actual parallels there were between the book and life in today's United States beyond the infamous "Big Brother is watching you". While there were definitely some interesting connections, there were fewer than you might think. And that's not because, on the one hand, the U.S. government isn't actually spying on us, or, on the other, because the book isn't all it's cracked up to be. The NSA is definitely spying on us and Nineteen Eighty-Four is definitely an amazing book. The trouble is that it's more of a critique of failed revolution, specifically of the failure of socialism, than of panopticism or surveillance society. With that being said, I'm not here to criticize our cultures reappropriation and misunderstanding of classical literature. I'm here because, after I finished my audiobook, I watched Michael Radford's film version, Nineteen Eighty-Four (the version which came out in 1984), and I guess I have some things to say about it.

Bad news first: John Hurt and Suzanna Hamilton don't have a lot of on-screen chemistry. This might have been done on purpose to show how love is impossible under fascism or something, but it prevents the romantic scenes from doing their job and robs Winston's eventual betrayal of Julia (spoiler alert) of some of its impact. The dialogue also feels slightly clunky, like it has a bit too much reverence for its source material (a common problem with Shakespeare adaptations). This reverence does have its benefits, however, as the film is an incredibly faithful adaptation of the book (and is so without an abusive running time). While it obviously doesn't have as much character or nuance, this inevitable flaw of filmic reproductions of literature didn't prevent either my enjoyment of the story or my understanding of its critique. If you're a fan of the book who can deal with the unavoidable shortening of film versions or if you want a quick view into Orwell's universe then definitely give this one a try.

Final Notes:
- I will admit that, while in general I try to give film adaptations the benefit of the doubt with regard to changes between the book and film version so long as sense and symbolism are left intact, there were two (arguably) minor changes that bothered me in this. First of all, O'Brien doesn't wear spectacles outside of one short scene and part of the reason Winston trusts him is supposed to be because of the reassuring way he resettles them on his nose! Second, the "Under the spreading chestnut tree" song is almost entirely missing, with only a short snatch of it being uttered without explanation by Winston!
- Roger Deakins's (No Country for Old Men) cinematography and Allan Cameron's (Starship Troopers) production design make an awesome combination and manage to portray with incredible skill a world that is completely dull and monotonous.