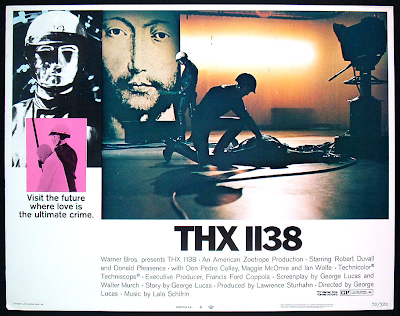 Thanks to a recommendation from Dan Spicer, today I have a review of THX 1138 (1971). This is a dystopian science fiction film and was George Lucas's feature film directing debut, produced in collaboration with Francis Ford Coppola and his production company American Zoetrope. It takes pretty heavy influence from George Orwell's Nineteen Eighty-Four (although I guess you could probably say that about most dystopian sci-fi) and plays out somewhat like Equilibrium (2002) but with better acting and camerawork. The film also shares an interesting and disappointing historical parallel with Lucas's more popular sci-fi adventure Star Wars: both were re-released with added scenes using ugly CGI. Considering this is probably the only version you'll be able to get your hands on, should science-fiction fans chase down a copy? Almost definitely.

In the future, the population is controlled physically by a robotic police force and emotionally by the administration of powerful mood-altering drugs (which, in classic 1984 fashion, eliminate sex drive). THX (pronounced "thex"—definitely not "sex"—and played by Robert Duvall) lives with his female roommate LUH (definitely not pronounced "love"; played by Maggie McOmie). THX is very good at his job as an assembly worker handling some sort of radioactive material (it seems like he's assembling the very police officers which repress him à la Elysium), but recently he's been having trouble with his feelings. As it turns out, LUH has been altering his medication so that he'll be able to feel love. They're caught, however, and LUH is taken away to be reborn while THX, not knowing LUH's fate, is thrown in prison.

If you're looking for another movie like Star Wars, this is not it. Whereas Star Wars is exciting, colorful and action-packed, THX 1138 is moody, monotonous and slow-paced. While Star Wars creates a fantastic world for viewers to escape to, the world of THX 1138 is one to be feared. The shooting and editing of THX 1138 places it closer to art house than action-adventure. In the first act we learn about this new futuristic society, and the details are thought-provoking and entertaining. The second act slows down significantly and becomes more confused as THX comes under suspicion and is thrown in jail. In the final act we lose most of the pretense in favor of action until the film's final moments. While the world Lucas creates is both interesting and beautiful, the movie does occasionally verges on being unclear and boring.

If you can stand to watch movies without (many) explosions or sex scenes, however, there's a lot to like about this film. It's wonderfully atmospheric, which is something we don't always get to see very often in science fiction (at least not visually—most atmosphere is conveyed through the soundtrack). There's also an incredible attention to camera angles, framing, and color palette, which was very refreshing in a genre generally cluttered with samey reveal shots and an overreliance on computer generated graphics and post-production. The immense, oppressive weight of the environments on the small, fragile characters is impressive to say the least. There are also some of George Lucas's signature tropes like fuzzy, distorted dialogue (generally over communication devices) and panels covered in buttons.

As with most films in this particular sci-fi niche, THX 1138 has something to say about love and something to say about government, and as with most movies (though I'll be the last one to admit it), there are two contradictory (perhaps perpendicular) ways to read these messages. This can be seen most easily through the film's love story. THX and LUH are two star-crossed lovers, as the cliché goes, who could be together if only the government were slightly less oppressive. From this comes the first version of the message: government and true love are incompatible (or, if you prefer, politics inhibit love). But then THX and LUH get together and it's magical and transformative and their love gives THX a newfound purpose in life. This gives us the second, inverted message: While restrictive government can be frustrating at times, prohibition is what keeps desire alive.

Some great quotes I didn't manage to fit into the review:
- "If you feel you are not properly sedated, call 348-844 immediately. Failure to do so may result in prosecution for criminal drug evasion."

- "For more enjoyment and greater efficiency, consumption is being standardized."
- "Are you now or have you ever been?"