A Tale of Two Sisters (quickie) 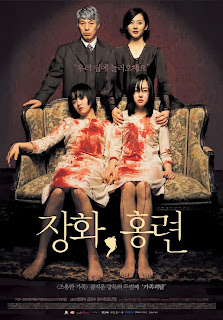 A Tale of Two Sisters (original title Janghwa, Hongryeon; 2003) is a film adaptation of the traditional South Korean folktale Janghwa Hongryeon jeon and is one of my top 10 all time favorite foreign films. Unfortunately I'm sick and don't have the time or energy to do this movie justice, but suffice it to say there are some Sixth Sense-level twists that call for a proper Lacanian analysis. IMDb categorizes this as a drama/horror/mystery/thriller and I was introduced to it as a horror film, but to be honest it ends up playing out as more of a psychological drama. The horror and thriller aspects are definitely there, but the pace is slow and the scares are few and far between. That's not necessarily a bad thing, you just have to set your expectations properly. This is not Ringu (1998). Instead the experience of watching it feels more like David Cronenberg's wonderful Spider (2002) or the somewhat more recent Amour (2012) by Michael Haneke.

My goal today it to straighten out what happens in the narrative of A Tale of Two Sisters (this will obviously involve major spoilers). The story is told in flashback starting with the protagonist, Soo-mi (Su-jeong Lim), in a mental hospital. From there we return to a trip she took with her sister, Soo-yeon (Geun-young Moon), as well as her father (Kap-su Kim) and stepmother (Jung-ah Yum).  The first two thirds of the film play out like a family drama with Soo-mi becoming upset when their stepmother harasses Soo-yeon, but then things become more complicated. The father tells Soo-mi that Soo-yeon is dead (and has been since the flashback started) and that she's just having trouble adjusting. It doesn't stop there, though. In a subsequent scene the father reveals that the stepmother is also a figment of Soo-mi's imagination and that it's only ever been the two of them.

The situation is finally clarified in the final scene of the movie: sometime in the past, Soo-mi and Soo-yeon's (real) mother killed herself, Soo-yeon discovered the body (hanging in a closet, hence the significance of the wardrobe earlier in the film), and in her panic accidentally killed herself as well. The stepmother discovered the scene but did nothing to remedy it, partly because of her frustration with Soo-mi. From here we can begin to unravel the story and arrange it chronologically. We have the moment of trauma where the mother and sister die sometime in the past. Later,  the bulk of the movie begins with Soo-mi and her father going on their trip together. Soo-mi attempts to repress the trauma of her loss by fantasizing that Soo-yeon is still alive and by projecting her guilt onto a fantasy version of her stepmother. Her father becomes fed up with her inability to accept the truth and brings in her (real) stepmother which shatters the illusion. Still unable to completely accept reality, Soo-mi is sent to a mental hospital where a doctor asks her to recount her experiences, the scene which opens the movie.

Final Notes:
- Soo-yeon and the fantasmatic stepmother never have conversations with the father. They talk in his presence, but it becomes clear that it is just Soo-mi talking, and if/when the father responds it is to Soo-mi (which can be seen when the father gives the stepmother what is eventually revealed to be Soo-mi's medication). The father also only ever addresses Soo-mi, although the sisters are rarely apart. Just some well-executed foreshadowing.
- There is some truly fabulous camerawork in this movie. Not only does the director clearly prefer longer takes which I always appreciate, but the shot where the (real) stepmother enters and breaks Soo-mi's fantasy is a 360 degree tracking shot that substitutes the (fake) stepmother for Soo-mi. So good.