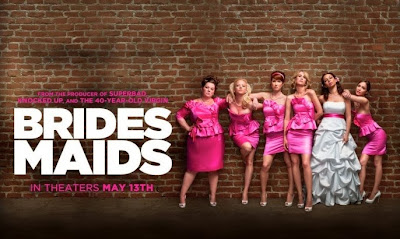 As usual, I have a few prefaces before I get into my review of Bridesmaids (2011), which was recommended to me by my sister Michelle, my friend Erin, and just about everybody else in the entire universe. First of all, as I mentioned in my review of Back to the Future, I'm terrible at reviewing comedies because I'm sort of like, "Hey that was a funny movie, but let's have a nice boring talk about what it means." On top of that, this isn't really my favorite genre, with its preoccupation with heteronormative relationships and the way it creates misleading and potentially dangerous fantasies (see, there I go). With that said, you people who recommended this to me must really know what you're doing, because despite my misgivings I thoroughly enjoyed watching it.

The overall plot trajectory isn't really anything new. Our protagonist Annie (Kriten Wiig) struggles to keep her life together while her best friend Lillian (Maya Rudolph) gets married. From the two being best friends at the beginning of the film, they slowly become increasingly estranged from each other until... well I don't want to ruin anything but you can probably guess what happens.

There are a variety of side plots and supporting characters to keep it entertaining though. Most prominently featured is probably Annie's love life which begins with the unsympathetic but handsome Ted (Jon Hamm, who is interestingly uncredited) but shifts onto the funny and loving Rhodes (Chris O'Dowd). There's also a strong focus on the relationship between Annie and Lillian's new upstaging and over-the-top friend Helen (Rose Byrne) who interestingly seems to provide both a foil and mirror for Annie.

So the acting from the leading and supporting cast is all phenomenal, but what really stuck out for me was Melissa McCarthy as Megan. She is so full of strength and personality and brought something which (for me as a certified nonexpert) felt like a breath of fresh air (to use a decidedly stale metaphor) to the romantic comedy genre. The scene on the airplane where she interacts with Not Air Marshall Jon (played by her husband Ben Falcone) is absolutely hilarious, and the director returns to the couple in an end credit sequence where the two make a sex tape. It's no surprise that director Paul Feig decided to give her the starring role in his newest film The Heat (2013), a movie I am definitely looking forward to now despite my general distaste for Sandra Bullock.

It should also be mentioned that the movie, despite its location in the heart of a matrimonial melée, is really more comedy than it is romance. Since Lillian is the one getting married rather than Annie the story centers more on Annie's position as an outsider and the comedy that arises therefrom. And the majority of the comedy works brilliantly. The movie had be laughing quite frequently, and not even breaking my immersion within the film by taking notes ruined that for me. The only complaint I had was that some of the awkward-uncomfortable comedy at the beginning of the movie came off as awkward and uncomfortable rather than funny for me, but everything else ended up feeling just right.

The one downside to focusing on the comedy over the romance is that the love story between Annie and Rhodes ends up with a slight tacked-on feeling. Admittedly, when Annie first asks him out on a date I definitely shouted "Finally!" at the screen. On the one hand, their relationship definitely provides some necessary relief from the drama of the main plot. On the other hand, it really doesn't get much time devoted to it which ends up causing two problems. Without spending enough time to develop Rhodes's character the film is stuck with the basic tired clichés of "I'm mad at you because I'm unable to face my feelings," and "you're mad at me because you're overly sensitive and slightly unforgiving." These are perfectly acceptable character traits if we get some character development to justify them, but without that they just feel old and tired. The second problem is that you run into the problem I mentioned in my introduction of creating unhealthy fantasies. Because the characters only have a surface level of of detail they become easy to internalize. But I'll try to save the bulk of that critique for my inevitable review of Don Jon.

Don't get me wrong, Bridesmaids really is an enjoyable film even if you think you're not the kind of person to watch romantic comedies. If I focus more on the negatives than the positives it's only because I had so much fun that I felt the need to justify myself for not giving the movie perfect scores.

One thing that pleasantly surprised me was the movie's thematic awareness. I wouldn't exactly say this is one of the smartest comedies I've ever seen, but there's an ocean of difference between this and something like 27 Dresses*. For the sake of simplicity I'll single out my favorite of the movie's messages. At times Annie can be a bit frustrating because you'll become overly aware of the fact that she's sort of blaming other people for problems she's causing herself. This is where Helen comes in. She's annoying in sort of the same way: her life at home sucks (like Annie's) so she tries to find solace in other people's lives (whereas she plans Lillian's wedding, Annie invades it with her jealousy). Annie (and the audience) is made to see the ways in which she is becoming everything she hates. Then we get that amazing moment where Megan visits the moping Annie and tells her, "You're your problem, and you're also your solution." This might not be the most mindblowing revelation, but it's one of my favorites and one that's definitely necessary in a genre plagued by characters who project their insecurities onto their friends and rely too heavily on others to solve their own problems.

I made a photo set of stills from the movie over on Tumblr, so there's a link to that if anyone wants it.

Further Reading: here are some links to other times I discuss my critique of 27 Dresses, because apparently I never tire of hating that movie:
- My review of Silver Linings Playbook (2012), where I first mention it with any real depth in print.
- My analysis of the Bechdel Test, where I develop it in relationship to the aforementioned test. Speaking of which, Bridesmaids passes not only the Bechdel but Reverse Bechdel if anyone was interested.
analysis Bridesmaids characters comedy criticism fantasy film Kristen Wiig Melissa McCarthy message movie review romance romantic comedy themes theory