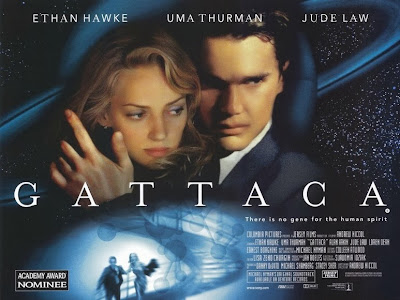 A VHS copy of Gattaca (1997) has been sitting, unwatched, on my family's movie shelf for at least fifteen years, having been lent to us by a friend when it first came out. I decided it was finally time to watch it, and I'm seriously glad I did. It's definitely an oddity as far as science fiction goes. There are basically no special effects, and despite the fact that the movie centers around space travel we never once see a spaceship. There are also no fight scenes, whether involving super powers, guns, or even fists. The typical sci-fi visual coordinates are entirely missing, and the only thing "science fiction" about this movie is its premise: in the future, human genetic engineering has been developed and accepted to the point where naturally born humans are ostracized. From there it plays out more like a drama than anything else.

Vincent Freeman (Ethan Hawke) is just such a naturally born man, a degenerate (the movie's pun, not mine), and partially caused by his alienation from society he dreams of traveling into outer space. Unfortunately for him, an important job like being an astronaut is not likely going to be given to a genetically inferior person like him. So Vincent decides to pursue alternate routes to success: he participates in a kind of assisted, consensual identity theft. Jerome Morrow (Jude Law) is a genetically engineered man who recently lost the use of his legs and became wheelchair-bound, and decides to sell his identity to Vincent in exchange for a percentage of the profit he makes off using it. This practice is not only frowned upon (it's called a "borrowed ladder", one of the most benign slurs I've ever heard), but constitutes a form of fraud, so Vincent and Jerome have to be careful.

(At this point Vincent calls himself Jerome and the real Jerome calls himself Eugene, his middle name, but for the sake of clarity I'm just going to refer to characters by their original names.) Vincent gets accepted into Gattaca, a NASA-like entity planning a trip to Saturn's moon Titan, and excels at his job. He meets Irene (Uma Thurman) and the two get along well together. One day, Vincent arrives at work to discover the company's director has been murdered and one of his eyelashes has been found at the scene. Suddenly the police are looking for (the original) him and his (real) face is everywhere and he must try harder than ever to maintain his cover or more than just his mission to Titan will be compromised.

If that synopsis makes Gattaca sound like a psychological thriller then I've sold it wrong. This movie is first and foremost a character study of Ethan Hawke and Jude Law's characters. For the first third of the movie you get to see Vincent develop and struggle with the discrimination he faces, and more importantly you get to see his determination and self-reliance. Part of the irony of this movie is that, in this futuristic world, someone as self-reliant as Vincent must rely on the identity of another in order to work towards his dreams. Then, as the second act of the movie begins, Jerome enters, and his spoiled and miserable mannerisms indicate immediately that he is essentially the opposite of what we have just seen. But he is not set in his ways, and his interaction with Vincent gradually brightens his outlook on life. This buildup makes the beginning of the film feel slow, but the result is well worth it.

Gattaca also develops several themes, the first and most obvious of which is the classic nature vs. nurture debate. Genetically engineered humans like Jerome and Vincent's brother Anton are given the nature card whereas the naturally born humans like Vincent himself are given the nurture card. While Vincent does use (fake) nature to get to where he is, without the dedication he learned from the nurturing of dealing with discrimination all his life he would have failed. This can be seen in both Jerome and Anton. Jerome, despite the fact that he has exceptional genetics even for a world full of genetically engineered people, fails to accomplish his dream. Anton also fails despite his superior genes in both his search for Vincent with the police as well as his efforts to outswim Vincent. While it is clear that both are necessary in order to reach your dreams, nature is insufficient without nurture. The movie's tagline says it all: "There is no gene for the human spirit."

Speaking of Anton's inability to catch Vincent, Gattaca has an interesting take on discrimination in general. Anton is not after Vincent because he thinks that degenerates like him don't belong in important jobs. He's after him for personal reasons, he's after him because he could never get over the fact that Vincent beat him swimming when they were younger despite his genetic inferiority. Additionally, Vincent's doctor (who must routinely perform drug tests which would reveal Vincent's true identity) knows who Vincent really is but never turns him in. This shows that in Gattaca discrimination takes place at an institutional level and is interestingly absent from the interpersonal realm. Vincent is ostracized by the jobs he applies for and the police chasing him. People don't discriminate, the businesses they run do. The movie also manages to present a compelling narrative about discrimination that white people can relate to, which I guess is probably a good thing.

Another theme which Gattaca works through is self-sacrifice, an idea which I dealt with more thoroughly in my article on The Prestige. In short, Frances Restuccia analyzes sacrifice through psychoanalysis and comes up with three criteria with which to evaluate the morality of sacrifice. The first step is to sacrifice one's self and identity, something Vincent achieves plainly through his assumption of Jerome's identity (even if this seems like a step forward, it is still a sacrifice since Vincent's own identity is more meaningful to him). The second step is to sacrifice one's belief in the big Other (or in layman's terms, one's belief in the importance of the acceptance of society). While on the one hand, Vincent has Irene (another genetically inferior person) to commiserate with, on the other he never asks her for recognition and certainly doesn't seem to care what the rest of society thinks (evidenced by his willingness to take part in identity fraud). Finally, one must sacrifice the pursuit of objet petit a (the object of desire), and it is in this sense that Vincent seems to fail. At the end of the movie he continues to look to outer space as an ultimate goal, as That Thing Which Will Solve All My Problems.

The closest I came to having a problem with Gattaca is that it falls into the trap which has snared many other productions before it of needlessly tacking on a love story, but I can't even really criticize them here. As another genetically inferior person, Irene fills out the audience's need for someone to emphathize with Vincent. There's also a really creative sex scene which is filmed upside-down and incorporates the sea, a meaningful symbol for Vincent (representing home, family, security, and success). Most importantly of all, the side plot with Irene doesn't eclipse the film's major politics of dealing with discrimination. Listen, if I can give this movie five Zizeks despite the fact that it features a Hollywood Unnecessary Love Story then it should be clear that this movie is chock-full of interesting themes and symbolism.

(Slow but rewarding build with lots of well-developed characters and ideas.)

Quotes and trivia:
- "I never left anything for the swim back."
- "I lent you my body, you lent me your dream."
- G, A, T, and C, the letters which make up the film's title, are also the letters used for genetic sequencing. Thanks to Alice for pointing this out to me.
- Gattaca has one of the weirdest spaceship interiors in all of sci-fi in that all the astronauts are just wearing business suits.
analysis characters criticism crosscutting discrimination Ethics explained film Gattaca identity message morals movie nature nurture psychoanalysis review sacrifice themes