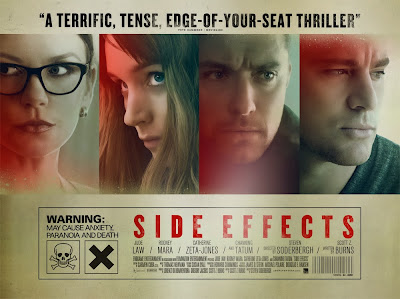 I absolutely love Steven Soderbergh, so when my friend Jimmy recommended his most recent film Side Effects to me I was only too happy to oblige. This is the director's third collaboration with writer Scott Z. Burns after The Informant! in 2009 and Contagion in 2011, both of which I found to be rather enjoyable (in fact you'll find The Informant! on the list of my Top 5 Recent Comedies). In a stroke of good fortune, Side Effects manages to capture the best of both of those movies: the poignant satire of The Informant! combined with the atmospheric filmmaking of Contagion. In this film the satire is pointed at the pharmaceutical industry, but it wraps the critique in a tightly woven psychological thriller resulting in a movie that should be enjoyable for anyone.

The story follows Emily Taylor (Rooney Mara) and her psychiatrist Dr. Jonathan Banks (Jude Law) who meet after Emily drives her car into the wall of a parking garage. Emily's husband Martin (Channing Tatum) recently finished his prison sentence for insider trading and Emily is under a lot of pressure to provide for the two of them while Martin finds a job. Dr. Banks sees her a few times a week and begins prescribing her various antidepressants (most are fictional but there are interestingly some real-life SSRIs mentioned such as Zoloft and Celexa) as well as other drugs aimed at dealing with the side effects of the antidepressants. When Dr. Banks goes to have her medical records transferred he meets the final major party to the situation, Dr. Victoria Siebert (Catherine Zeta-Jones), Emily's former psychiatrist. Incidents at Emily & Martin's home continue to occur despite Dr. Banks's attempts to cure her, however, and the situation eventually comes to a head when Emily

Uh, yeah, so this is a psychological thriller, and a good one at that, so the twists begin early and don't really let up after that. I'm going to have to operate in Full Spoiler Mode from here onward in order to discuss the movie with the amount of detail that I require to talk about its satire. Just go see the movie. I promise it's good. Here, check out this awesome shot:


Before I get into my analysis of Soderbergh & Burns's satire, I'd just like to point out that this movie is fabulously well-made (although I would certainly not call it a happy movie). The acting from the four leads is top notch (especially Rooney Mara and Jude Law) and newcomer Michael Nathanson also makes a strong impression as the assistant district attorney. The structure of the storytelling (it begins in the middle of the story and the closing shot duplicates the opening shot) struck me just as much as its content (I definitely jumped when Emily stabbed Martin). The control of the atmosphere is also phenomenal: while the first act feels almost like a horror movie, the second act takes the form of a political thriller and the final act that of a revenge film. The main musical theme of the film, which makes an appearance in many its tracks, is the perfect blend of touching and haunting. The only complaint I can really leverage against the filmmaking is the blatant Red Bull product placement.

Part of the reason this film is so great is embedded in the way it reinvents the noir foundation on which it's built. The femme fatale, one of the mainstays of any good noir, has always been one of cinema's most interesting and most problematic recurring characters. While she can occasionally occupy and maintain an emancipatory space, she is more often shown to be manipulative, selfish, and generally insane in a way rarely reciprocated by any of her her male counterparts. While Side Effects doesn't take the most feminist approach to this subject (whose uplifting character might ruin the satirical mood), it does take a unique one. After identifying Emily as manipulative and conniving, it then shifts your hatred of her onto Dr. Banks who, after getting Emily onto his side, continues to torment her. Side Effects doesn't discriminate in its criticism. Both men and women alike are defined by their purely self-interested motives.

This solipsistic nature of the characters in Side Effects is part of what defines its critique of the pharmaceutical industry. Everyone is simply in it for the money and has no interest in truth, knowledge or justice. In a curiously unnecessary side plot, Dr. Banks takes a consulting project for a new drug. The movie makes it clear in both how he accepts the job and in the way he presents it to his wife that he's only interested in the financial benefits. Even the patients he talks to about it don't care about whether the drug is going to benefit them and are only interested in the fact that they'll be given their drugs free of charge. 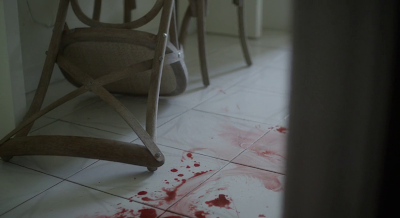 The most prominent way the movie makes this point, however, is in its centralization of television and the media. We hear multiple times about how television advertisements shape public knowledge of drugs and even of mental disorders. Everyone Emily talks to has had some sort of encounter with the pharmaceutical industry (from prominent figures like her boss telling her about her own success with Celexa, to minor characters like Martin's coworker's spouse who talks about when she "found a lump"). Dr. Banks's life is ruined by his unfair and misleading portrayal, which is what eventually leads him to strike back against Emily and Dr. Siebert in the final act of the film.

This highlights the way that direct-to-consumer advertising (something which is only legal in the United State and New Zealand) is never in the interest of public health. You don't create an advertisement to fill a need, you do it to create a need. You don't advertise for Coca-Cola to spread awareness of dehydration (or diabetes for that matter). You do it to make more people want to buy the delicious life blood of capitalism that is Coca-Cola. The anti-pharmaceutical attitude of Side Effects culminates in Dr. Banks using prescriptions as threats toward Emily until she ends up in a undead stupor. The United States Soderbergh and Burns imagine is populated by two people: greedy, egocentric schemers and gullible, unintelligent zombies. Let's hope for our sake we can find a third.