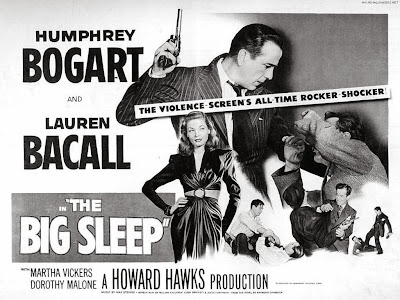 I want to start this off on the wrong foot by saying that reviewing Howard Hawks's 1946 masterpiece The Big Sleep feels slightly unnecessary. It's such a classic in my mind that it feels like reviewing Casablanca (1942) or Citizen Kane (1941). But I realize there are some people out there who for a variety of reasons are not well versed in the greatest hits of classical Hollywood, so I wanted to put this forward as not only one of my favorites of the era, but also a movie which I still enjoy watching. Some of the reasons I love this movie are bound to my love for classical Hollywood cinema in general, but there are also several reasons modern viewers with no knowledge of the history or background of this period of time should see this movie. So with that in mind, I've decided to put together a bit of a unique article today: here's my crash course in The Big Sleep and it's relation to both classical and modern cinema. 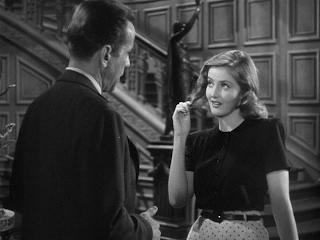 This period in the history of cinema wasn't know for it's fair depiction of women, and often female roles are limited to portraying bundles of sexual energy and little else. The Big Sleep is no different: Carmen Sternwood especially is a young woman with no personality or character traits beyond her job in pornography and her reputation as a loose woman. Vivian Rutledge isn't much better as the outlet for the protagonist Philip Marlowe's desire. 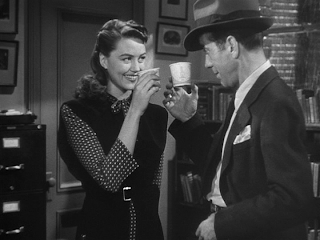 As it was virtually impossible to depict sexual acts during the classical period despite the fact that this was precisely what any mature audience came to the cinema to see, directors had to find alternate methods of showing sex. The most common example of this is cutting away from a scene in such a way that it is obvious what is happening without literally saying "let's go have sex." The most famous instance of this is in Casablanca, where Rick and Ilsa embrace, then the film cuts away to a shot of a lighthouse, and finally the film cuts back to Rick and Ilsa with Rick now smoking a cigarette. While on the one hand, the director can reasonably say to his producers, "Look, I just wanted to gloss over some unnecessary dialogue," On the other hand the audience knows very well what the lighthouse and the cigarette symbolize. The Big Sleep contains a somewhat subtler version of this: Marlowe and a librarian are in a closed bookstore during a heavy rain, they begin having drinks, and the camera pans away and cuts. When it returns it is focusing on a shot of the rain outside, a shot that can mean many different things but in this case is a symbol of the overflowing enjoyment of the two characters. 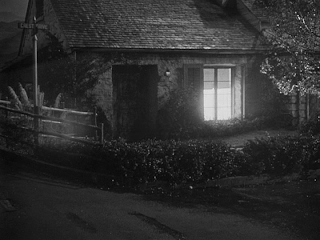 There is a common trope in classical cinema where a scene in which a woman screams for help will almost always be filmed from outside wherever she is. So, in The Big Sleep for instance, when Carmen screams after witnessing the murder around which a portion of the plot circles, the scene is shot outside the house looking in (but not seeing; pictured above). Later, when Marlowe tells Mrs. Rutledge to count to ten and scream while he escapes to get a gun from his car, the camera follows Marlowe outside instead of staying with Mrs. Rutledge. The point is not that the camera remains or moves outside to stay with the protagonist: in both cases the camera is focusing not on Marlowe but on the entrance to the house from which the scream emits. It's almost as if there's something indecent or even unsafe about seeing or being in the presence of a screaming woman. 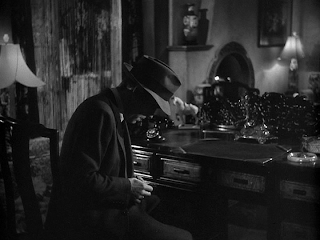 Hey I know that title sounds boring, so skip it if you want, but these are all things I find fascinating and I couldn't think of any other way to describe them. One thing that my father actually pointed out the last time we watched The Big Sleep together was, to put it in his words, how they "didn't quite have the music thing figured out yet." The soundtrack plays a very different role in the classical era, one influenced somewhat by the silent film that preceded it (commonly said to have ended in 1927 with The Jazz Singer). Without dialogue, directors were forced to use other things to convey a character's internal monologue, one of the biggest of which was the background music (whereas modern directors tend to use the soundtrack to convey the overall mood of a scene). Classical directors and composers hadn't quite broken out of that mold, and as a result many scenes or entire movies will have music that doesn't quite fit the scene and is instead meant to convey the inner emotions of the characters on screen. For example, there is very little action in the above scene from The Big Sleep, but the main theme plays over it because Marlowe is troubled by what he has seen and is trying to clear his head and search for clues. 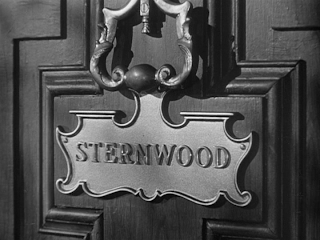 There are also a lot of small ways the camera behaved differently during the classical period than it does in modern cinema, but this comes with a small caveat. For instance, there tends to be a greater emphasis on the framing of the shots, but perhaps this is because I watch all sorts of modern movies but stick to the best of the best when it comes to the classical era. There were boatloads of movies made from the 30's to the 60's, and I'm sure they didn't all conform to this standard of quality. Two things in particular stand out as unique to this classical period, however, and which can both be traced back to technological limitations (which, in my opinion, happened to force directors into a more artistic cinema). First, there is an abundance of close-ups of inanimate objects This might be due to the quality of the film stock which would prevent images from being as clear as we can make them today. Second, directors exhibited a preference for zooming in to let audiences read text rather than have characters read it aloud (pictured above). This is more of a tradition carried over from the silent era when it was more essential to communicate plot details without dialogue. 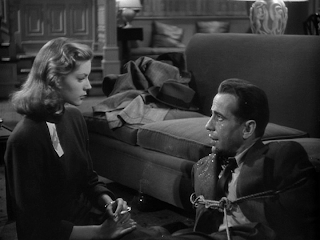 So this first one is a little less tangible than the rest of the points I've brought up, but there's something different about the acting and especially the way dialogue is delivered in classical cinema. This can be distracting for audiences new to the different style, but is easy to get used to in my experience. Perhaps this is due to the newness of the ability to have dialogue in film without the use of intertitles, but there's also something attractive about the difference (although maybe that's just because I spend too much time watching movies). In any case, I've gotten into more than I bargained for with this one as I can plainly not describe the differences between the two styles, so I'm going to move on. 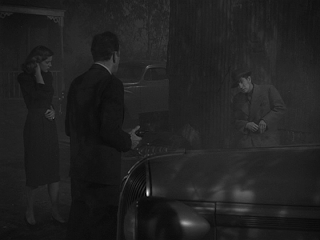 This one's a bit of a two-parter and is the closest thing to a judgment of quality of all of these notes. First of all, the fight scenes. I don't know much about post-production or how filmmakers make fight scenes look realistic now, but they certainly lacked it back in the day. The choreography of the fights is fine, but it's executed without any nuance or flair and in general feels painfully obvious. Maybe this is just a special effects thing, or maybe stunt doubles weren't required to also be actors just yet, but in any case the fewer fight scenes the better (although there's maybe something endearing about their lack of polish). The second is the way people die. I swear, actors must be required to take a How To Pretend To Die course before being allowed into the studio system, because they all do it the same way. You get shot, there's a second or two where you wear a mask of pain, and then you slowly and awkwardly fall over. Every single time. 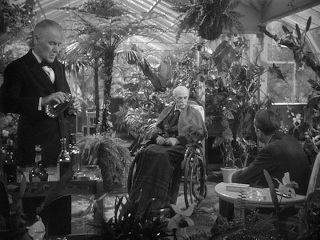 Drugs. Basically everyone was an alcoholic, and protagonists often smoked cigarettes in every one of their scenes. Considering multiple takes and everything, that's a lot of cigarettes. There's a technique where cigarettes would be broken in half for scenes where the character was supposed to have been smoking for a while before we enter the scene, but still. Whether or not actors were actually imbibing alcohol or simply colored liquid is harder to say and varied between actors and directors, but the sheer prevalence of it on screen is astonishing. 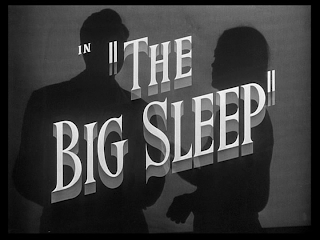 Final Notes:
- Just for clarity, I don't think any of these things makes classical cinema better than modern cinema if you couldn't tell by the types of movies I tend to watch. I just find the little details and differences interesting.
- The Big Sleep is one of the biggest influences for the Coen brothers' cult classic The Big Lebowski, and I bet you'll never be able to look at that title the same way again. I could do an entire article on the similarities, but fortunately the genius over at The Droid You're Looking For made an awesome and easily consumable infograph on the matter (link to the original article). Also, The Droid You're Looking For is an awesome blog.
- There are several jokes about Philip Marlowe's height, most likely because actor Humphrey Bogart was himself a little short (5 foot 9 inches).
- The Big Sleep is enjoyably aware of its status as a movie, and includes several lines asking characters if they're expected to behave "like a movie".
- There's a scene where Marlowe and Mrs. Rutledge prank call the police which is simply brilliant. Check out the clip here on YouTube if you like.
- The version of the movie I own on DVD has an issue where the dialogue is mixed much quieter than the background music. I don't know if this was an issue with the movie itself, but it's kind of annoying especially if you're in a sound-sensitive environment.
acting analysis best of cinematography classical hollywood dialogue dying fights film Humphrey Bogart Lauren Bacall movie review scream sexism soundtrack The Big Sleep top