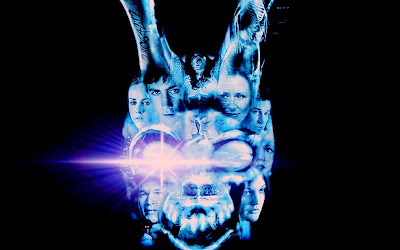 Donnie Darko is constantly featured on popular lists of the most confusing movies of all time. This phenomenon fascinates me since none of the movies on these lists are all that confusing. I mean, if you really want to have no idea what's going on in a film you need look no further than art house cinema. These movies tend to lack any sort of cohesive narrative structure whatsoever, whereas the movies populating these confusing movie lists all tell stories which are easy enough to follow but which simply contain confusing elements. For instance, two other common inclusions are 2001: A Space Odyssey and Memento, the first of which merely contains an ambiguous symbol (the monolith) and the second of which doesn't proceed chronologically. Similarly, anyone can tell you what happens in Donnie Darko, but what seems more interesting to audiences is what this sequence of events means.

So my goal in this article is to make sense of what happens in Donnie Darko, both in terms of the plot and of what the plot means. I'm going to assume that you, the reader, have seen Donnie Darko and want what happened to be clarified. If you have not seen the movie and don't want anything spoiled, this might not be the best article for you to read since I'll be discussing spoilers pretty heavily throughout. For those of you still reading, I feel obligated to warn you that being told definitive readings of ambiguous movies like this can ruin their magic. I don't know if I have the power to do that, but on the off-chance I do consider yourself warned. 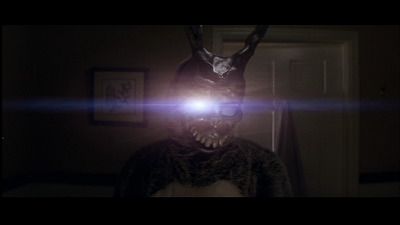 Listen: Donnie Darko has come unstuck in time. This movie is about time travel, so there's going to be some temporal confusion here, but I'm going to put this as clearly as I can manage. Imagine three timelines A, B and C, all of which start October 2nd and end October 30th and which—because of time traveling—occur sequentially (A then B then C). Timeline A does not appear in the movie, but we can figure out that it roughly approximates Timeline B (what we see in the movie) and begins October 2nd with Donnie as a troubled youth who meets a lovely young girl (Gretchen), witnesses her being run over, and shoots the man driving the car (Frank), ending on October 30th.

Then Donnie becomes unstuck in time and we begin again at October 2nd in Timeline B, the timeline which occupies the majority of the movie. Donnie wakes up in the middle of the road and a sequence of events roughly similar to that of Timeline A unfolds with one major difference: now Donnie is visited by the giant bunny Frank. Frank has come from Timeline A as a sort of ghost haunting Donnie. Another difference between A and B is the jet engine which fell from the plane carrying Donnie's mother and younger sister in Timeline A's October 30th onto Donnie's family's house on Timeline B's October 2nd. There are many other minor changes because of the butterfly effect, but the last major change from Timeline A to Timeline B is that Donnie learns about time travel.

We begin again at October 2nd in Timeline C which occurs at the very end of the movie. Donnie remains in his room rather than going out to talk to Frank and is killed by the falling airplane engine from Timeline B's October 30th. Any effect he had on anyone from a previous timeline is erased, the major evidence of which is that Gretchen claims to have never met Donnie. Any further events in this timeline are uncertain due to the fact that the movie ends. 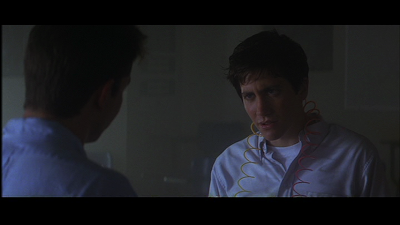 So what's the point of all this? One major resource for understanding the events of Donnie Darko is a special feature on most copies of the DVD called "The Philosophy of Time Travel," pieces of which appear in the Director's Cut of the film and all of which can be accessed online here. According to this material, the airplane engine is the Artifact which opens a Tangent Universe where Donnie becomes the Living Receiver who will guide the Artifact back to the Primary Universe assisted by Gretchen and Frank, the Manipulated Dead. Make sense?

The thing about Donnie Darko for me is that trying to tie it down to one specific meaning makes me feel like Kitty Farmer, Donnie's physical education teacher. Donnie criticizes her for reducing everything into the oversimplified dichotomy of Fear versus Love. As Donnie explains, "There are other things that have to be taken into account here, like the whole spectrum of human emotion. You can't just lump everything into these two categories and then just deny everything else!" 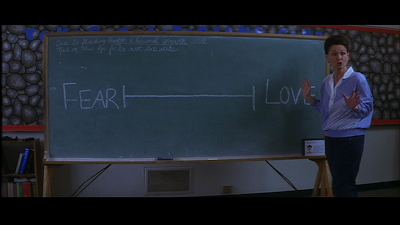 I could tell you that the movie is a contemplation of the tragic irony of suicide. I could explain that Donnie's actions helped many people—they gave Gretchen happiness and security, they allowed Cherita to hope for a better future, they forced Jim Cunningham to rethink his life, they made professors Pomeroy and Monnitoff proud—only to be invalidated by his negative perception of them and subsequent decision to end his life. I could argue that the movie follows one boy's search for meaning in a confusing and scary world. But that would be like Mrs. Farmer saying "If you don't complete the assignment, you'll get a zero for the day." There's the whole spectrum of human emotion to take into account, and the only way to not do justice to the wonderful Donnie Darko is by confining it to a single reading.
analysis confusing criticism Donnie Darko explained film meaning movie plot Slaughterhouse Five suicide time travel timelines