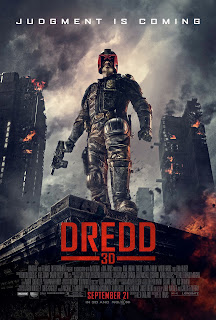 SO MUCH FROWNING. Karl Urban's Judge Dredd in the recent reboot simply titled Dredd (2012) is obviously a bit of a caritcature, but there's something about his iconic frown that epitomizes this movie. Not that the movie will make its audience frown (although it very well may do that), but that this movie just does its own thing from start to finish. There are a few things keeping this movie from being a total disaster: the action sequences are definitely exciting, the soundtrack and sound design in general are both phenomenal, and there's a tremendous amount of style throughout the film (the art department definitely studied the B-Movie Handbook on How to Portray Excessive Violence). But on the negative side of things, the writing is pretty terrible. I don't just mean the dialogue (which occasionally borders on mediocre), but the storyline. It feels more like the movie is trying simply to string together its various fight scenes than to actually tell a story. This is the embodiment of style over substance, so without further ado let's talk about its substance anyway.

This type of movie is certainly not the only one of its kind, but the idea it puts forward always fascinates me. Judge Dredd is a man who upholds the law through incredibly violent means. Dredd kills more people that are killed by anyone or anything else in the movie. And yet he is the hero because the people he kills are drug addicts and criminals. On the one hand, I'm always tempted to praise movies like this because they seem to pierce through to the underlying foundational violence of the law. But on the other hand, Dredd is completely uncritical of this violence. We get that moment when Judge Anderson realizes a man she killed had a wife and child who depended on him, and there's an interesting symmetry between the way Dredd kills Ma-Ma and the very crime which called Dredd to the scene, but at the end of the movie Dredd drives off into the sunset a hero. Maybe there's some satire I didn't pick up on, but from what I can tell Dredd embraces a system of justice more violent than the crime it serves to punish.

Final Notes:
- One thing I really can't praise enough is the fact that we get a male/female partner pairing and there's absolutely no sex or romance in the entire movie. I understand it's a thing people like to see, but it doesn't need to be everywhere. If I want romance, I'll go watch a romance. Just keep it out of my action movies.
- Apparently one of the amazingly eerie songs that plays during the slow motion sequences is a Justin Bieber song extremely slowed down (reference).
- On a similar topic, it's definitely good that the effects of the made-up drug slo-mo are obvious because the explanation for how they work is pretty bad and doesn't make a lot of sense.

(An incredibly stylish and occasionally beautiful movie which probably has one too many flaws for many viewers, but which will likely enthrall some others)