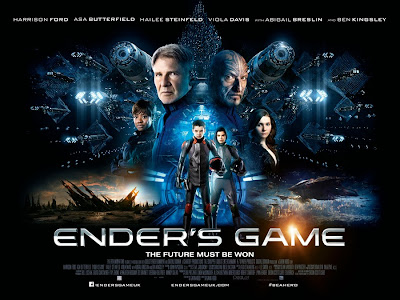 This article was originally written for and published by the wonderful folks over at Literary Traveler. For more of my material on Ender's Game, check out my predictions from before the film was released as well as my original review. No, I haven't spent way too much time thinking & writing about this movie. I don't know what you're talking about. Anyway, here are some more thoughts on the adaptation of Ender's Game.

If you haven’t read the book or seen the movie, I’d readily recommend both. The book is easily accessible and doesn't feel dated, despite being written almost thirty years ago. On the other hand, you don’t need to read the book to understand the movie, and it has everything a sci-fi enthusiast needs, from spaceships to aliens to giant laser beams. They’re also both intelligent narratives and have plenty to offer those who read more with their brains than their eyes.

Of course, like any adaptation, there are differences between the book and the movie. Whether you've read the book and are considering a screening of the film, or you've seen the movie and are curious about the source material, I’m here to let you know what you can expect from the experience.

When it comes to the basics of adaptation, there are three actions a writer can take with regard to the source material: stuff can be included, stuff can be eliminated, and stuff can be changed. This stuff can be either important or unimportant, and this distinction is crucial to evaluating whether or not an adaptation is faithful to its original content. Eliminate or change too much important stuff and the movie may feel like it doesn't deserve its title, but include too much unimportant stuff and it might feel like the references are simply lip service.

So where does Ender's Game fall on this spectrum? Well, it really has a little bit of everything.

It includes important things, which are relevant to the overarching themes of the original plot, as well as some less important things, which fans of the book will appreciate. For me, the biggest highlight in terms of inclusions was the virtual reality game where Ender (Asa Butterfield) defeats a giant. In the book, this functions as a way for Ender to vent his frustrations with Battle School, and it also allows his instructors an intimate view into his psyche. The movie obviously doesn't include all of its detail, but it gets the essentials down faithfully.

Also included is the book’s critique of war. Not only does Ender suffer due to his age and the fact that he is undeniably a child soldier, but Colonel Graff (Harrison Ford) and the other instructors push him past his limits despite his emotional struggles and continuously lie to him about the reality of what he’s doing. This is recreated with a fair amount of fidelity in the film. Graff and Mazer Rackham (Ben Kingsley) are wonderfully intimidating, and there’s a great argument between Ender and Graff following the climactic battle scene that is impressively acted and thematically rich.

From here we enter dangerous territory. Excluding or changing just about anything even remotely important can cause the experience to be disappointing for fans of the original work. The biggest exclusion I noticed, and admittedly one that would be difficult to seamlessly integrate into film, was the lack of Ender's internal monologue. The book was a mental journey for both Ender and the reader, and in a genre cluttered with monotonous space battles and shoot-em-ups this was a refreshing change. The movie tried to fill this gap with Ender’s letters to Valentine, but these are few and far between.

Yet, the biggest change from the novel was the tone. The book, especially in its second act, is very dark and despairing. As we read, Ender loses faith in himself and his abilities while the instructors continue to push him harder and isolate him more. In the movie, on the other hand, Petra has a much greater presence and acts as a friend for Ender to confide in, lending a much lighter and friendlier tone to the film.

The real question is: “Will I enjoy Ender's Game?” If you like science fiction, you will probably enjoy the movie regardless of whether or not you read the book. If you have read the book (as I had), the answer is more a matter of your expectations than anything else. Go into it expecting everything to be the same and you’ll leave in a sour mood. Go into it understanding that this is the director’s own vision of the source material, however, and I expect you’ll have a wonderful time.

Final Notes: (interesting, odd, or otherwise noteworthy changes)
- They call the buggers Formics. Now before you Ender universe fans jump all over me and explain that's their real name, I understand this. The thing is, in the entirety of the Ender's Game book they're called buggers and nothing else. Changing their names to Formics just felt like the writer shouting, "Look I read all the other books too, isn't that cool?!"
- They changed Dap from being the only adult in the entire book that's nice to Ender into a stereotypical drill sergeant. This is incredibly disappointing at first since we don't get the classic lines about Dap being the kids' mommy, but in the end it works out by having him acknowledge Ender's achievements. This is a moment that would have felt completely alien in the book, but with the film's shift in tone I thought it worked well.
- The rules of the Battle Room are changed from simply requiring someone to pass through the enemy's gate to awarding points for hitting certain parts of the body and having the gate as an instant-win condition. This is odd because there are no ways in which this change has any impact later in the movie and its explanation could have been cut with no loss of sense.
- Bean is added to Ender's launch, when in the book they don't meet until Ender is given his team of misfits and told to lead Dragon army. This seems to be part of the writer/director's attempt to make the story more palatable for children and give Ender more friends (for more on this, check out my review of the movie). In terms of adaptation fidelity I don't like it, but I understand what they're trying to do.
- In other Bean-related news, the thing where Graff asks Bean to make Ender's Dragon army isn't as random as it might have seemed if you've only read Ender's Game. It's something that's revealed in Ender's Shadow.
- They made Major Anderson a woman. My initial reaction to this was positive, since who can argue with seeing more women in strong roles in film, but my mom brought up the excellent point that they brought in a woman for the most traditionally female part they could possibly have switched. Imagine the difference between changing Anderson into a woman and changing Ender. Big difference.
- So much Petra. Why?! (If you want to hear me whine about this even more, check out my review.)