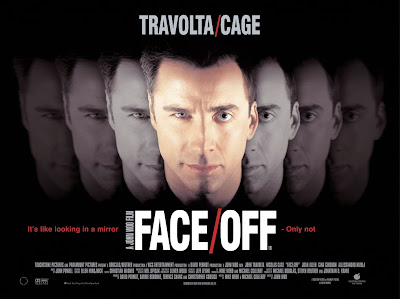 Face/Off is another film from the large collection of quality science fiction released in 1997 (including titles such as Men in Black, The Fifth Element, Starship Troopers, Contact, and Gattaca). I don't know what it was about that year, but it was undeniably a great year to be a sci-fi fan. Face/Off is less of a pure sci-fi movie (no spaceships, aliens, or lazers) and more of an action movie with a sci-fi premise (face swapping). Directed by John Woo (Mission: Impossible II), it should come as no surprise that the movie's action is of the highest caliber. If you're looking for a serious film this is certainly not the place to look, but if you desire something silly and fun, Face/Off definitely delivers.

So the basic story is John Travolta and Nicolas Cage are archenemies because Cage killed Travolta's son. Several years later, Travolta has become a cop hell-bent on destroying Cage. He finally gets his chance when Cage is knocked into a coma, but Travolta learns that (in stereotypical movie villain fashion) Cage planted a bomb to go off in a week. Travolta agrees to have his face replaced with Cage's in order to infiltrate Cage's entourage and find out where the bomb is. But when Cage wakes up (faceless) from his coma and takes Travolta's face for his own, the situation becomes much more complicated than first planned.

This is John Woo we're talking about here, so the emphasis on action over plot should be obvious. The action sequences will definitely keep you on the edge of your seat, but if you're easily distracted by mediocre writing then you may not have the patience to enjoy the action. Why villains set bomb timers with significantly more time than it takes them to escape the blast radius (and conversely why heroes never give themselves enough time) I'll never understand. But the movie doesn't stop there with its implausible happenstance. Face/Off also pulls the "one last mission" cliché as well as the "characters who traded places are more aware of their new life than the person they traded places with" routine.

The strange thing about critiquing this movie, however, is that because it doesn't take itself seriously there's a sense in which my criticisms miss the point. In his review of Attack the Block, Film Hulk defines a masterpiece as a movie where every single element works towards an identifiable goal, and in this sense Face/Off is almost a masterpiece of an immoderately over-the-top and indecently excessive action film. Even the soundtrack with its heavy use of latin choir songs works towards this goal of sheer and exorbitant movie violence. It's not quite perfect, but it gives you the sense that Woo knew he wasn't making a serious film and wanted to push the boundaries of the action genre, and my above criticism of its stereotype-ridden story actually adds to this feeling.

What I really can't get over is how perfectly Nicolas Cage and John Tavolta were cast. The movie needed two completely unrestrained actors and I can't think of anyone I'd rather see in these roles. Then on top of that, after half an hour the actors switch places and their characters become caricatures of each other. Face/Off becomes a movie where John Travolta plays Nicolas Cage and vice versa, and this in itself is maybe the biggest reason I can give for recommending this movie. If you like Nicolas Cage and want to see John Travolta pretend to be him for two hours, you're in the right spot.

Okay, no, I lied. If there's one thing I can't get over about Face/Off, it's how sexually charged and homoerotic the whole movie feels. Travolta and Cage's characters are the only ones with any depth, and they spend the entire movie trying to catch each other. They each have love interests, but they're so undeveloped that it feels more like they exist only to cover up this sexual tension. The fight scenes are especially telling. There's overindulgent use of slow-motion along with a plethora of meaningful glances shot between the two characters. But then to top it all off, at the end of the movie the two are put onto stretchers and placed into the same ambulance so it looks like they're in bed together and Cage (who's really Travolta) takes his ring back from Travolta (who's really Cage) as if they just got married. Eve Sedgwick would have a field day with this movie.