Invasion of the Body Snatchers (analysis) 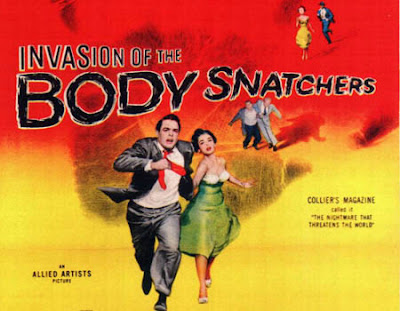 I was recently browsing the American Film Institute's various lists of the best films of all time and realized there were two movies on its Top 10 Science Fiction list which I hadn't seen (the other was The Day the Earth Stood Still and don't worry, I've seen it by now). I loved the 1978 Invasion of the Body Snatchers, so I decided to give the original 1956 version a shot.

I prefer the remake since I feel like it had this amazing use of lighting and maintained a strong sense of horror throughout (and of course the ending is so unbelievably iconic), but for what it's worth it's definitely a tight competition and I know there are those out there who will disagree for much more intelligent reasons than simply "it came first." The 1956 film plays much more like a classic film noir than a horror or science fiction film (especially with its voice-over narration), and many viewers may end up preferring it for that reason alone. Unfortunately I'm not here to discuss the differences between the original film and its remake (they're very different). Today I'd like to answer a single question about the movie which I found interesting: what do the pods signify?

Now I realize that in the world of the movie the pods are actual aliens from outer space, but I want to talk about what they represent culturally and psychologically. There is, of course, an answer offered for this question within the film itself: the pods represent an adaptation to "what's going on in the world," or in other words, it's a reaction to an overabundance of progress. But what do movies know about themselves? I want to make up my own answer! And of course, as a Lacanian, my answer is going to be much less reasonable and probably not make sense, so if you want to leave now I won't think any less of you.


In Parallax View (and probably elsewhere), Slavoj Zizek defines objet petit a, or the object-cause of desire, as that which is "in you more than yourself." It is that undefinable aspect of a person which cannot be pinned down to any one of their concrete features, but instead is embodied in the way all of their characteristics are put together. When you love a person, you love what is "in them more than themself", the total which is greater than the sum of its parts, and this is what can be sometimes so traumatic about love.

In an early scene of Invasion of the Body Snatchers, Dr. Bennell has a conversation with his friend Teddy who suspects that her uncle has become a pod (although they don't call it that yet of course). She initially has trouble putting her finger on what's different, and eventually says of him, "He's been a father to me ever since I was a baby. Always when he talked to me there was a special look in his eye. That look's gone." That look in his eye is precisely what was in him more than himself, his objet a. In another scene, Dr. Bennell and his love interest Becky discuss the ongoing epidemic and Becky questions how Bennell knows it's really her. He answers, "Like this," and kisses her. The solution is clear: he knows who she is because of the love between them, because of the objet a he sees in her.

From this we can see that what makes you who you are, what differentiates real people from pods, is that something which is "in you more than yourself", that something which in Lacanian psychoanalysis is called objet a. Therefore we can say that pods are people who have lost their objet a, people who have lost their object of desire, and thus people who have, in a sense, lost their will to live.
1956 analysis criticism desire film humanity Invasion of the Body Snatchers Lacan love movie object of desire objet a original psychoanalysis review theory Zizek