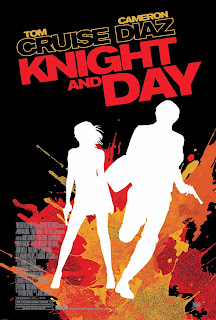 Knight and Day (2010) is one of the most polarizing movies I've ever seen. I don't mean that some people I talked to loved it and some people hated it, I mean I literally am on both polar opposite ends of the spectrum of enjoyment with this movie. On the one hand, this was one of the funniest action/comedies I've seen in a very long time. This movie is up there with True Lies for me in terms of the excellent combination of the two genres. Tom Cruise's character and dialogue are both hilarious and perfect in almost every way. There's that great scene on the airplane where Cameron Diaz is in the bathroom psyching herself up to flirt with Cruise while he's beating up secret agents without her knowledge. Comedy is different for everyone because of differences in taste and all that, but for me this was the highlight of 2010 in terms of comedy (I also don't watch many comedies, so that might be a factor).

But then there's Cameron Diaz's character. Diaz plays the epitome of the woman who cannot survive in the real world without the strength of a man. Once she joins Cruise she finds herself continually in situations she has neither the mental nor physical fortitude to overcome. There's this one scene where she fires an uzi and the recoil make her lose control and almost kill Cruise. And that's not even the only time Diaz almost ends the movie early by killing its actual (male) protagonist. She ruins his plans so consistently that more than once Cruise has to knock her unconscious in order to achieve his goals. This is the kind of movie that makes stuff like Salt and Haywire look like feminist manifestos. Knight and Day is so sexist that I find it nearly impossible to harden my nerves enough that I can enjoy it without cringing. Which is really a shame, because it is a rather funny film if you can overlook its shortcomings.