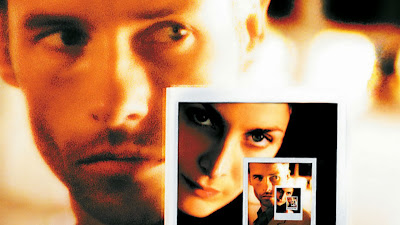 Earlier this week I took on the task of explaining certain basic plot elements in the movie Donnie Darko, so today, for my magical 100th article since beginning this monstrosity of a website a little over a year ago, my wonderful girlfriend Alice gave me the brilliant idea of writing something similar for the only movie I've watched over 100 times: Christopher Nolan's Memento. If you haven't heard of the film I really can't recommend it highly enough. It has a bit of a cult following for being one of those movies that is "hard to figure out," but like many mind-bending movies before it, Memento is great for reasons unrelated to its confusing plot.

This movie has that sort of genuine insight into human nature that only comes once every few years. Of course, as many of these movies do, it achieves this insight into humanity by means of a character who is, in a sense, inhuman. Leonard Shelby, Memento's protagonist, has short term memory loss. His inability to make new memories since an incident in the unspecified past makes Leonard decidedly not a part of what we would consider "normal" humanity. But Nolan uses this misfit to show how we are all misfits, how none of us is quite as "normal" as we pretend to be. "We all need mirrors to remind ourselves who we are."


So in light of the film's thematic richness and this website's milestone article, it's about time I continue to be intimidated by the idea of tackling this movie and instead write a piece which simply puts its unconventional narrative structure into chronological order. This should go without saying, but I'm going to spoil the whole movie, so consider yourself warned.

Memento tells its story by alternating between opposite ends of its tale and working towards its middle. It switches back and forth between color scenes which begin at the story's end, and black and white scenes which begin at the story's beginning. As the movie progresses (as we move forward in movie-time), the color scenes move backwards in story-time and the black and white scenes move forward in story-time so that the movie begins at the outer edges of its narrative and progresses towards the middle. Here are two infographs which represent how this works, as well as some sort of weird slide-based presentation thing (I don't recommend this one, but I found it while I was browsing and figured I'd offer it just in case). So without further ado, here's the story reorganized from beginning to end. 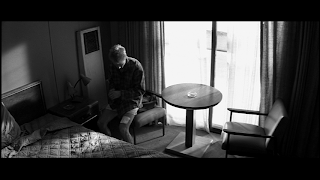 Leonard wakes up in an anonymous hotel room. There's a note on his left thigh which reads "Shave" so he begins to do this in order to tattoo "Fact 5: Access to Drugs" there. He's interrupted by a call from a mysterious man (most likely Teddy) to whom he explains the story of Sammy Jankis. Sammy is another man with short term memory loss who Leonard investigated for insurance fraud and who (perhaps unknowingly) killed his wife. Leonard now uses the memory of Sammy to help understand his own condition and give himself a (dramatically ironic) point of identification.

During the phone conversation, the man on the other end of the phone provides information which convinces Leonard to change the tattoo from "Access to Drugs" to "Drug Dealer". Eventually Leonard removes a bandage covering a new tattoo which reads "Never Answer the Phone," and when he asks the man on the phone to identify himself the line goes dead. Leonard enters a state of panic and tells Burt at the front desk to hold all of his calls, at which point Burt tells him a cop is looking for him. An envelope with a picture of Leonard is slipped under the door, and he finally takes the cop's call. The man on the other end (unheard) presumably gives Leonard details on how to catch and kill Jimmy Grants, the man Leonard thinks raped and murdered his wife. 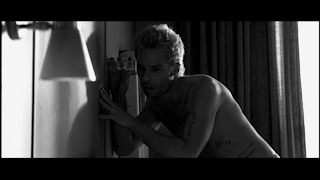 Leonard goes outside to meet Teddy, and then gets in his truck to meet Jimmy. He kills Jimmy and the movie changes from black and white to color, but the seed of doubt is planted when Jimmy seems to mutter "Sammy". Leonard questions Teddy about the situation, and it becomes clear that Jimmy was not the man who raped and murdered Leonard's wife and that Teddy has been stringing Leonard along. It also becomes uncertain whether his wife actually died in the incident. Leonard decides to set up a string of clues for himself that will lead him to kill Teddy. Traumatized by his laatest murder, he contemplates the nature of humanity, and the film ends as he stops in front of a tattoo parlor.

Leonard gets "Fact 6: Car License SG13 7IU" tattooed on his left thigh underneath "Fact 5". He ignores Teddy's advice to leave town and goes to Ferdy's bar after finding a coaster in the pocket of Jimmy's coat (which he's now wearing). Natalie sees Leonard in Jimmy's clothing and assumes the worst. She serves him a beer with hers, Leonard's and another random bar patron's spit in it, but takes it away when she hears that Leonard's last memory is of his wife dying. Natalie brings Leonard to her place and returns to the bar, only to come back later with the news that someone's coming for them already. At this point Dodd has presumably heard about Jimmy's demise and is looking for either the money Jimmy borrowed or the drugs he used it to buy. Natalie instigates Leonard into beating her up and then convinces him that Dodd did it and asks Leonard to get rid of him. 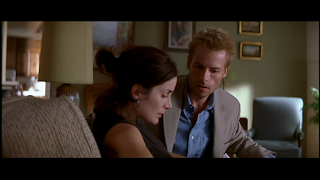 Leonard leaves and Teddy convinces him to go to the Discount Inn where he rents a second room. He calls an escort service to get a woman to let him live the fantasy that his wife is still alive. Instead of finding relief, he's overcome with a profound sadness and goes to a secluded spot outside of town where he burns his wife's remaining possessions. As he returns to the inn, he is intercepted by Dodd, a chase scene ensues, and the two men eventually wind up at Dodd's place with Dodd bound and gagged in a closet. Teddy shows up and the two of them force Dodd to skip town. In Leonard's confusion over the situation, he returns to Natalie's to ask her what's going on.

Natalie is grateful that Leonard got rid of Dodd, and the two sleep together out of a mutual loneliness. Natalie offers to trace the license plate tattooed on Leonard's leg, and the couple temporarily parts ways. Leonard has lunch with Teddy, and the two men discuss why Leonard is still in town and the progress he's made in his investigation. Leonard leaves to meet Natalie and she gives him a copy of Teddy's driver's license (the result of the trace), after which Leonard returns to the Discount Inn. There he puts the pieces together, meets Teddy, takes him to the same spot he killed Jimmy, shoots him in the head, and the movie begins.


Now if you're here looking for someone to tell you if Leonard really is Sammy Jankis and if he killed his wife and all that, I'm sorry but there is no answer that will definitively solve this problem. Like many before him, Leonard is an unreliable narrator, and other information provided by those around him (most notably Teddy) is also unreliable for pretty obvious reasons. More importantly, one of the reasons Memento is such a wonderful and intriguing movie is precisely this ambiguity. If everything was spoon fed to us in black and white terminology then we wouldn't spend so much time thinking about it, and considering the different possibilities wouldn't be fun or interesting. I've already ruined one of the mysteries of this wonderful movie (the story structure); leave the more important ones undisturbed.