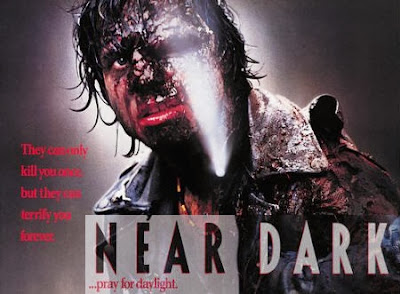 At the recommendation of my friend and fellow movie nerd Martin, I recently had the opportunity to watch Near Dark (1987), the second feature film from director Kathryn Bigelow (The Hurt Locker, Zero Dark Thirty). And yes, Near Dark is, in fact, a vampire movie, but before you run away in disgust at this undead monster's recent popularity, Near Dark is also a good movie (also these vampires don't sparkle in the sunlight). Admittedly I was a little disappointed at first because I was basically expecting a big dumb action movie, but what we get instead is more interesting and more satisfying. Bigelow uses the pretext of vampires to stage both a compelling family drama and an incisive morality tale.

Near Dark is a story about a boy named Caleb (Adrian Pasdar) who meets a girl named Mae (Jenny Wright). The trouble is Mae is not a young girl, she's a vampire, and she wants Caleb to join her undead group of friends. Caleb likes Mae and wants to tag along, but he has to kill in order to survive as a vampire. The group eventually comes to accept him after he demonstrates his willingness to sacrifice himself, but an encounter with his worried family makes him realize that he doesn't fit in with these new people. Unfortuantely, he's seen the vampires and knows of their existence, and they can't allow that.


Ironically, I think the biggest problem I had with this movie was Bill Paxton. Coming straight from his role the year before in Aliens, Paxton is absolutely at the top of his game. As the vampire Severen, he's so charismatic and stylish that you forget he's a murderer. You forget he's a sociopath because he plays it so cool that it makes you want to be a sociopath too. And we're not supposed to root for this guy? He has way more confidence than Caleb! Yet in order for the dramatic tension to make sense, Severen is a bad guy. Judging by the fact that the movie's cult following has more to do with the roving vampire clan than the meager protagonist, I don't think I'm alone in this feeling. I'm just alone in thinking it makes the movie emotionally confusing.

And speaking of style, the costume and make-up departments have attitude flowing out of their ears. It takes real talent to make this look as cool as it does gruesome. The characters are a bit stereotypical, but along with their cosmetics and the actors' talent (we also get Vasquez and Bishop right off the Aliens set) they end up working well enough. The centerpiece in terms of character development is really Caleb, and this makes him less immediately likable but more deep and well-rounded.

So I guess it's time to get into the actual story here. Spoilers follow after the break.


I'd more readily recommend this movie as a family drama or adolescent coming-of-age story rather than a thriller or fun vampire romp on par with Queen of the Damned or Interview with the Vampire. This is because Caleb never fully joins the vampires, and at the end of the movie he even cures himself and Mae of their affliction. The structure of the narrative plays out like this: a young boy meets young girl, he runs away from home with her, he meets the guys she hangs out with, he tries to be cool but realizes he can't fit in, and finally he brings the girl home with him (after killing her friends, of course). It's even got the scene where the main character tries to make it home after a night of too much partying. The movie's thrilling as well, but Kathryn Bigelow just threw in the vampire thing to keep the drama interesting, so if you came looking for vampire campiness (like me) you may leave disappointed.

In a similar vein, the movie actually puts forward a pretty solid set of ethical guidelines. It becomes clear by the end of the movie after several failed attempts at assimilation that the reason Caleb cannot join the group of vampires is because of his refusal to kill another human, even at the expense of his own life and well-being. And as much as he desperately wants to join this cool new group, he saves both his father and sister from being killed or turned into vampires at the price of losing their good graces. Caleb spends a large portion of the movie in pain either from hunger or from exposure, and his selflessness is ultimately the major lesson of the movie.