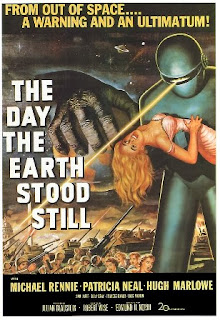 The Day the Earth Stood Still (1951) is one of the most influential science fiction films of all time, so in my effort to educate myself in the genre I decided to give it a look. The most obvious thing that will jump out at you if you watch this movie today is that it really didn't stand the test of time. The acting and cinematography are all great, but the special effects are just the opposite. I don't care how much you can appreciate old sci-fi special effects, Klaatu's spaceship and his robot Gort are both pretty unimpressive by today's standards. And then on top of that they're not even featured very heavily in the movie. The robot and spaceship are basically bookends to the central story of Klaatu studying the human race. This sci-fi oldie is best appreciated from a modern standpoint for its influence on the genre and its anti-war message.

At the end of The Day the Earth Stood Still, Klaatu gives his big speech about how there's an intergalactic community which bans the use of atomic weaponry, and if Earth does not cease its development of this dangerous armament they will be forced to vaporize their planet. In fact, one of the ironies of the famous movie poster above is that Gort only ever uses his lazer beam to destroy human weaponry (in one scene Gort knocks out two guards, but this is the extent of his physical interference with the human world). The movie's anti-war message is timeless, but what's interesting is where this movie stands with regard to other science fiction films. Most movies, even at the time this was released, tend to be more skeptical of inhuman arbiters like Gort. In The Matrix, the machines turn humans into an energy source; in the Terminator franchise, Skynet becomes self-aware and tries to destroy humanity; even in 2001: A Space Odyssey, HAL convinces himself that his human companions are a threat to his mission. The Day the Earth Stood Still stands apart from these negative visions of the future, and as such it feels a bit naive at times, but ultimately it's refreshing to see a more hopeful portrayal of the universe. One day we may be able to save us from ourselves.

Final Notes:
- I absolutely love the poster for this movie. The alien hand holding the Earth still is wonderfully menacing, and then on the other hand the idea that Gort would capture a woman for his own pleasures and attack humans is just silly.
- So if you care about this sort of thing, Klaatu is a pretty obvious Christ metaphor and there are some funny little references to this within the film (like Klaatu wearing the jacket of somebody with the name Carpenter). More to my interest is an anecdote I found on Wikipedia that supposedly the MPAA balked at Klaatu's limitless power and made the writer add the line into the script about his resurrection being impermanent.
- The famous line "Klaatu barada nikto" supposedly means "I die, repair me, do not retaliate," which I find slightly odd since this means Klaatu's name is "I die."