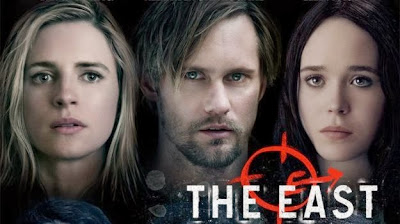 It's beginning to look more and more like I should actually do a Thriller of the Week segment where I compare one of the infinite new thrillers to Now You See Me (because apparently it's the best example of what bothers me about the genre). In any case, I have my very good friend Sof to thank for sharing The East (2013) with me, and while I don't think I'll be watching it again any time soon it does get some things right which bigger and "better" thrillers don't seem to understand. I may not care much for this movie's politics, but if nothing else it certainly knows how to develop a character.

So The East is about a group of anarcho-freegan terrorists, and if that sounds like a good idea for a movie then you'll probably like this a lot more than I did. Sarah (Brit Marling) is hired to a high ranking intelligence firm and is sent undercover to infiltrate The East, the group which gives the film its title. She attends the group's first "jam" where they poison some big pharma executives with a dangerous drug they recently put on the market. Sarah is disturbed by their tactics and returns to her normal life, but soon she finds the connections she made with the group may be stronger than those she made at home. 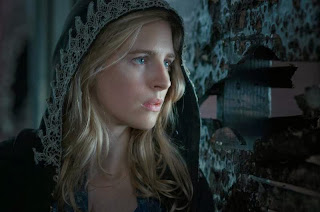 Let's start with The East's politics so we can get that out of the way and look at what's actually interesting about this movie. The philosophy of the group depicted in the film is insightful at times, but for the most part it's scattered, tiresome, and overbearing. These "revolutionaries" take up positions on everything from pharmaceutical corruption to pollution, from corporate waste to selfishness, from capitalist ideology to the morality of eating meat, and there's very little if anything at all that connects these disparate strands. At times the characters feel like counterculture caricatures, like indecisive teenagers unable to make up their mind about anything but the fact that they're upset with the world. The film eventually takes a stance against the group's eye for an eye policy and shows how both sides of the issue have their flaws, and buried within the critique are brief moments of genuine acuity, but it's ultimately too little too late.

Underneath this naive exterior, however, there's some great technical knowledge of how to make both a good movie and an effective thriller. For the sake of comparison, let's go back to Now You See Me. While that movie had some cool set pieces and energetic cinematography, it completely lacked any form of character development. The movie introduces the four magicians in a brief opening montage, but each scene shows more of the characters' flaws than anything else, flaws which they're never shown overcoming. Detective Rhodes is more of a protagonist than any of the magicians, and he's a completely blank slate until the end of the movie. This is one of its greatest failures: Now You See Me doesn't explain the main character's motivation until just before the credits roll. In order to care about a character and associate with their plight we need to understand where they're coming from. We know the magicians want to join the magician club, and we know Rhodes wants to catch them, but in each case the movie fails to supply us with a reason why. 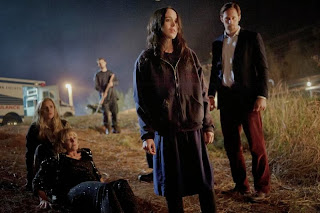 The East's politics may be somewhat clumsy and graceless, but at least its obviousness helps to give us a concrete sense of what the characters want. Of course it helps that the actors are all really good in their roles, with Brit Marling carrying the movie's entire emotional tension like it's no big deal and Alexander Skarsgard and Ellen Page each shining for their big scenes. But more than that, The East understands that your big twist has to be based in the plot, not the characters. If we waited until the end to find out that Sarah was actually part of an intelligence firm it would retroactively rewrite her motivations and we'd feel cheated. Instead Sarah's personal journey is compelling because we experience her initial culture shock followed by the subsequent attachment and eventual betrayal brought on by her experiences with The East. Instead of being told about her relationships, we directly experience Sarah's character maturing as she interacts with the people around her.

Unfortunately it would be a lie if I said the excellent storytelling was enough to make up for the film's messy politics. The artlessness of its philosophy infects not only the early scenes of the movie before Sarah has been accepted into the new group, but also much of a dialogue throughout the narrative. There may be a great sense of community, but when that community's values are a bit fuzzy and indeterminate the emotional impact suffers with its thematic paucity.