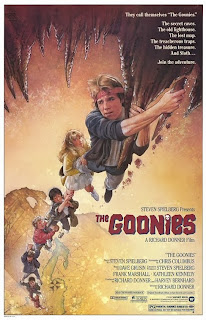 Thanks to a recommendation from my friend and fellow film nerd George I finally watched the classic 80's film The Goonies (1985), but I encountered a bit of a problem. I could understand everything that's great about it—from its sense of childhood innocence and wonder, to its genuine enjoyment in storytelling and adventure, to its heartfelt coming-of-age narrative—and it was still fun to watch, but my experience of the film wasn't as immediate as it would have been had I watched it as a kid. The movie didn't "happen" to me the way movies "happen" to younger minds. I still loved it, but from the removed, jaded perspective of someone who's seen too many movies. What I got out of it instead was a thoroughly Lacanian twist on the classic pre-teen self-discovery story. While The Goonies is on one level a traditional coming-of-age plot, on another it is also the story of a young man discovering his manhood, both literally and figuratively.

The Goonies begins with two brothers: the younger, timid protagonist Mikey (Sean Astin) and the older, macho foil Brand (Josh Brolin). Mikey is identified from the beginning as lacking, as the subject barred from enjoyment, by his reliance on an inhaler. His body is inadequate, and his position as castrated is highlighted in a scene where Chunk accidentally breaks the genitalia off a miniature statue of David. In order to rectify (sorry) the situation, he goes out in search for One-Eyed Willy, easily the best name for a pirate who stands (sorry) metaphorically for the male reproductive organ. This tension (sorry) is released (sorry) when Andy tells Mikey in the movie's final moments, "You keep kissing girls the way you do, the parts of you that don't work so good, they'll catch up to the ones that do." On reflection this is clearly supposed to refer to Mikey's weak lungs, but the only thing I could think when I heard it was that she's telling Mikey not to worry about his malfunctioning penis. And that, ladies and gentlemen, is why I should not be allowed to watch kids' movies.

Final Notes:
- Another interpretation of The Goonies is that it uses the structure of a childhood adventure story to play out a metaphor for class conflict. The Goonies' house is being foreclosed to be replaced by a country club, the ultimate sign of bourgeoisie heartlessness. This leads to one of Mikey's best speaches: "The next time you see sky, it'll be over another town. The next time you take a test, it'll be in some other school. Our parents, they want the bestest stuff for us. But right now they gotta do what's right for them, 'cause it's their time. Their time, up there. Down here it's our time. It's our time down here." This not only establishes the characters' attachment to their homes, but literally visualizes the above/below dichotomy between the two classes. Now why didn't I write this article instead of the Lacanian one? Because I have very poor taste.
- Mikey is Sean Astin, the man who played Samwise Gamgee in Peter Jackson's Lord of the Rings movies. Brand is Josh Brolin, the man who is perhaps most famous for playing George W. Bush in W. (2008) but who you may know better for his roles in No Country for Old Men or the recent Oldboy remake. Francis is Joe Pantoliano, the man who played Cypher in The Matrix and Teddy in Memento. You're welcome.
- So what is Sloth? Is he supposed to be some representation of the Real of childhood desire and how ugly and misshapen it can be? Is he just supposed to be a grown up who is still a kid in his head? He just seemed to stand out in a really strange way that I couldn't explain.