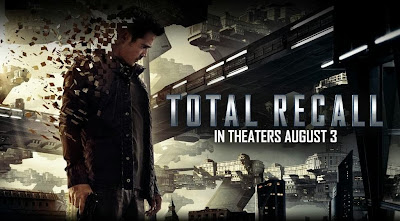 I loved the original Total Recall (1990) for all its campy sci-fi weirdness, and according to critics the 2012 version was below average even for a Hollywood remake. So when I decided to give last year's Total Recall a try, my expectations were set about as low as they could be. Maybe that's why the movie's first act, with its impressive (albeit fake) visuals and competent discussion of the nature of reality, was a pleasant surprise for me. The problem is that it uses this enjoyable and potentially thought-provoking premise to stage a by-the-numbers action flick. This is of course exactly what I would have anticipated if it weren't for the unexpectedly passable and even auspicious beginning. The sad irony of this remake of Total Recall is that you have to watch the first half of it to be disappointed by the second.

As with the original before it, Total Recall takes little inspiration from Philip K. Dick's short story beyond its basic premise. Douglas Quaid (Colin Farrell, a rather large improvement over Arnold as far as I'm concerned) is an average blue-collar worker who tires of the monotony of his everyday life and dreams of something more. He hears of a company called Rekall which claims to be able to implant false memories which will make you genuinely believe you've been somewhere and done something much greater than your daily grind. Reality and fantasy become indistinguishable as Quaid learns that he may have been living his dream all along.

The first change Total Recall makes to its predecessor is the setting. This version of the tale takes place in a decidedly dystopian setting, and the shots of the two main cities in which the majority of the action takes place were the first thing to make me think that maybe, just maybe, it wouldn't be a total disaster. The landscapes have a decidedly Blade Runner-like flavor to them, and can be quite stunning despite their obvious computer generated quality. At times it almost feels like Avatar in an urban environment: you know the plot's going to be stupid, so you take a moment to revel in the mindless, imaginary beauty of it all.

There are also some fun trick shots in the early portions of the movie which, while obviously taking advantage of modern advances in technology, show a love for creative filmmaking that I found genuine and entertaining. John Cho also gives an effective and nuanced performance as McClane, the head Rekall technician. The film even does a better job in its first 30 minutes of handling the story's complex and interwoven themes of appearance vs. truth and fantasy vs. reality. But then the story decides it's done and we get uninteresting and repetitive action sequences until the end of the movie.

Do we need to have a talk about story structure? Character development can't just stop after the first act. When half of your movie (50+ minutes by my count) consists of dumb action sequences then you really need to make the rest of it dense with character development or you're going to lose your audience. The "fish out of water" protagonist (even one with amnesia or dissociative identities) is a fine place to start—it's a strategy used prominently in sci-fi films to create a vehicle for exposition (it's even used in the first Star Wars). But you have to move beyond it for your ending to have any emotional impact. If you expect us to be on the edge of our seats when the main character is critically wounded you have to show us why we should care about him. This is what the middle of your story is for. It's not just where you dump all your fight scenes and set pieces.

There's this amazing line at the end of the movie when Quaid confronts the evil antagonist Cohaagen and is told he's fighting for the wrong side. Cohaagen says Quaid is actually an agent of the government working to disrupt the people he's come to know and love. Quaid responds, "I may not remember who I was, but I know who I am!" This crucial line of dialogue which could answer the central question of the film falls completely flat because even if Quaid has figured out who he is the audience certainly didn't get to see it happen.