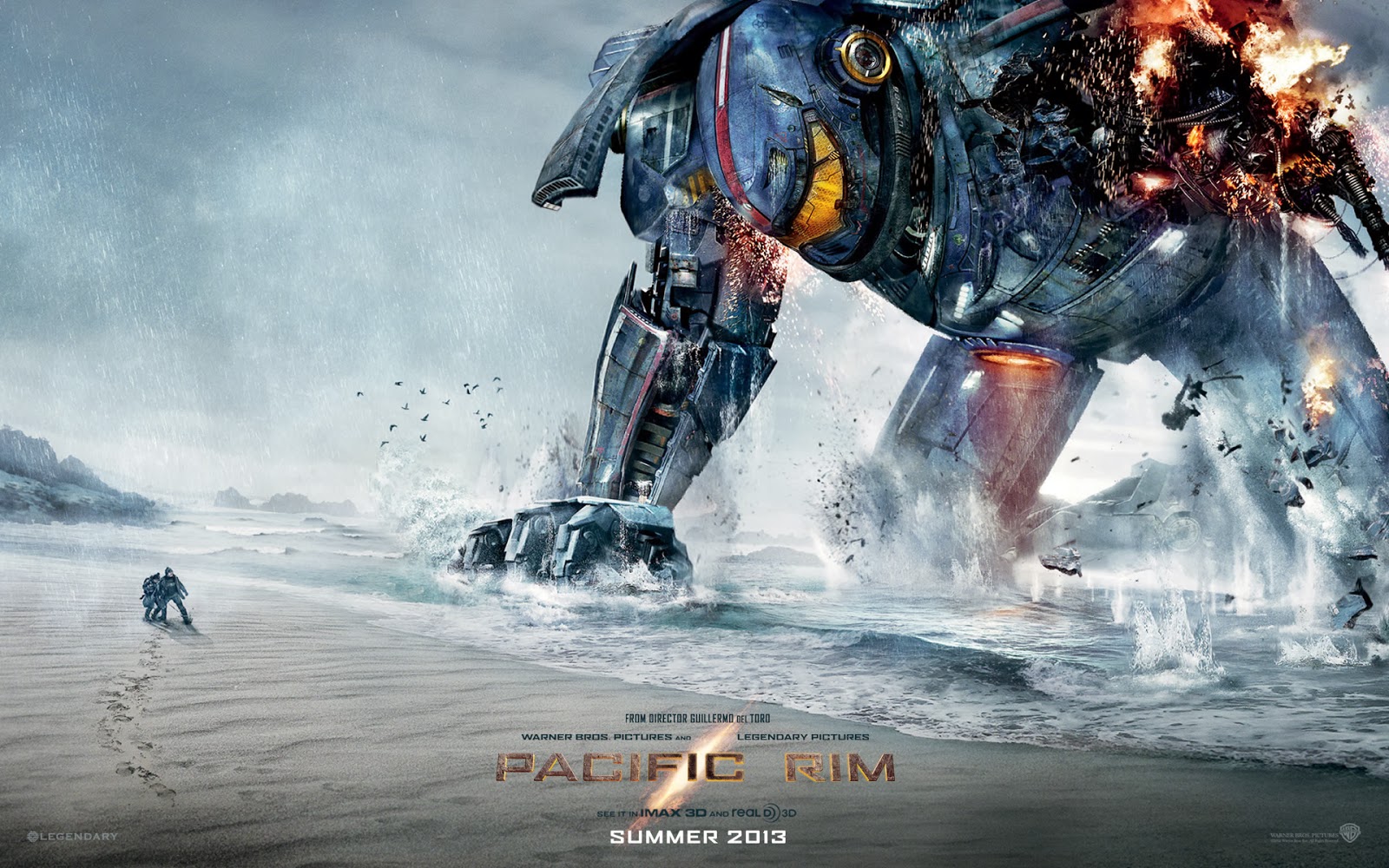 Pacific Rim (2013) is the newest movie from Guillermo del Toro, the director who brought us the visually and emotionally stunning Pan's Labyrinth (2006) and the fun but silly Hellboy, and in a sense this new movie is a combination of those two things. It obviously takes inspiration from various sources, but its visual style feels unique even at a time when audiences may be growing tired of giant robot movies. It isn't the smartest movie ever, but it also doesn't need to be, and at the end of the day it rises above the bar set for its genre. Pacific Rim is exactly what you think it is—a big dumb movie with robots fighting monsters—and while it's certainly far from perfect, it might be the most mindless fun you'll have at the theater this year.

So there is a plot (technically), and one of the best decisions the writers made for this film was to not design it as yet another origin story. The first three minutes gives us the background: a dimensional rift opened in the Pacific Ocean from which monsters (Kaiju) began to emerge, we struggled at first but eventually designed robots (Jaegers) to fight them off, and with the rise of the Jaegers our fear of the Kaiju diminished and the program lost its funding. Boom, done, no need for an entire boring movie setting up the possibility for a future franchise.

From there we get to actually have fun with the idea instead of waiting to see if the box office is enough to justify a sequel. The story progresses as you might expect—the government funds a stupid alternative to the expensive Jaegers, forcing the few who remain to fight the growing threat of the Kaiju alone—but this predictability is mostly forgivable since it's for the sake of entertainment. 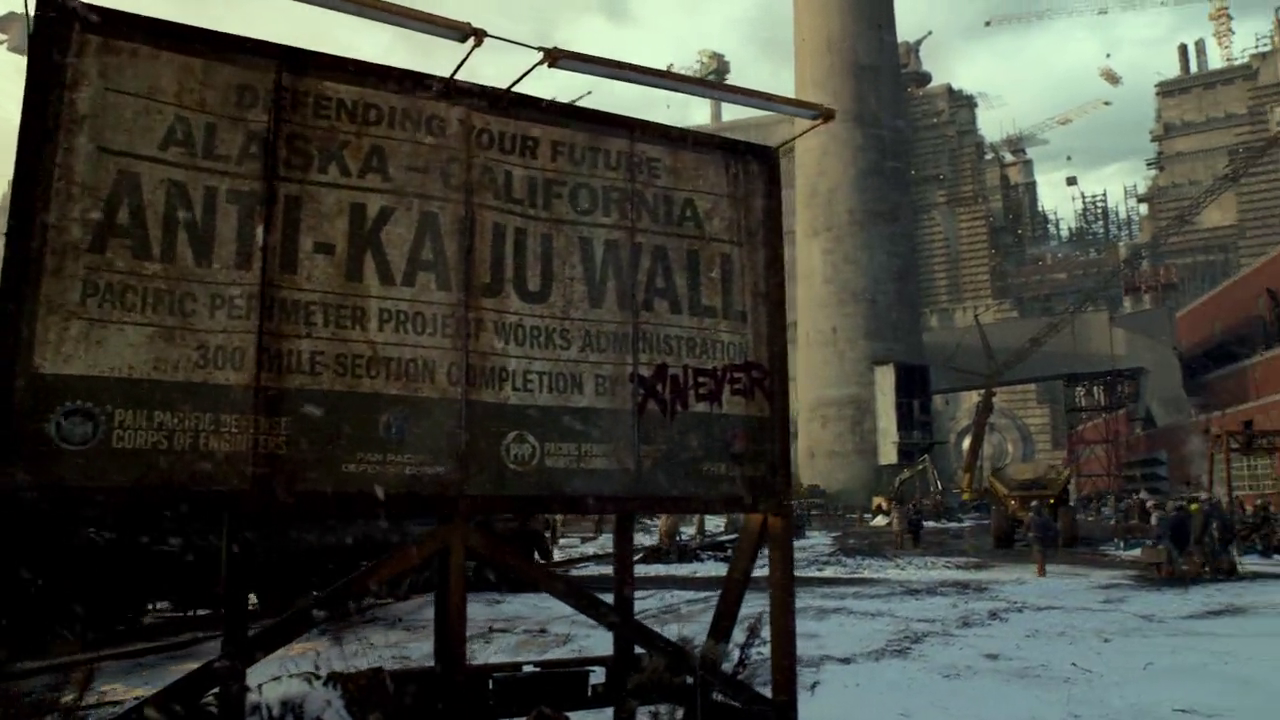 Pacific Rim definitely isn't the most intelligent movie you'll see this year. Drift compatibility is a perfect example of a sci-fi shenanigan that makes sense when it needs to but breaks down the more you think about it. Jaegers need two pilots because the mental load is too much for one person to carry, and each pilot controls one "hemisphere" of the Jaeger's "brain". Then why does the Chinese Jaeger require three pilots? Simply because of its third arm? Why can Charlie Hunnam switch which side of the Jaeger he operates?Shouldn't each pilot be better at one side or the other based on whether they're right-brained or left-brained? How can Charlie Day just jack into any Kaiju he wants and humans have to be drift compatible to even share a brain? Why does Idris Elba "bring nothing into the drift"? These questions are never dealt with, and while they are ultimately unimportant, audiences overly concerned with "plot holes" may find themselves distracted.

On top of this, the acting and character development oscillate pretty dramatically. Charlie Hunnam spends the whole movie struggling to maintain whatever bland, American-ized accent del Toro told him he was supposed to have, and Rinko Kikuchi's English is occasionally difficult to make out. Their characters work well enough to drive the narrative, but are otherwise pretty thinly written and forgettable. Idris Elba is a notable exception here, but he's a tiny island of talent in a sea of mediocrity.

The crazy thing about all this is not only that none of it really matters, but that even if it did it's still better than we're used to getting out of Hollywood. 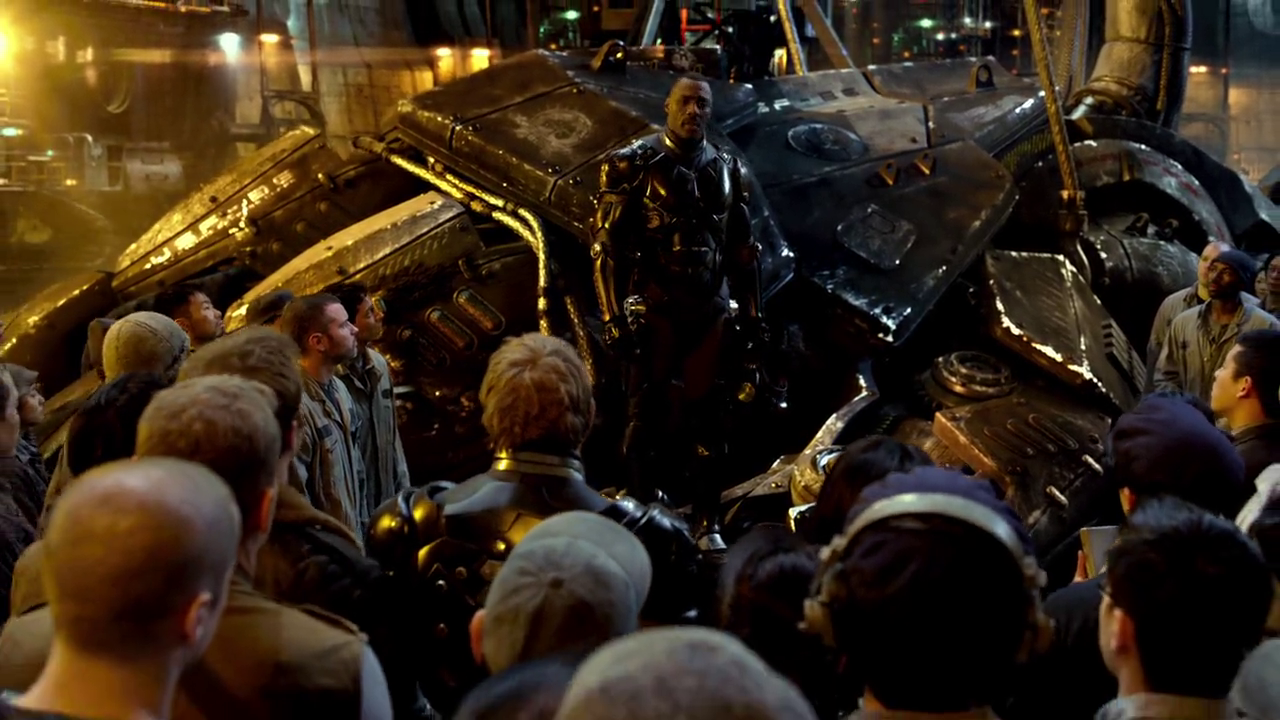 The reason you go to see this movie isn't to see a touching personal journey. This isn't Dallas Buyers Club. You go to Pacific Rim to see giant robots punching giant monsters in the face. The only thing the characters and story need to do is give the action sequences a sense of dramatic tension, and they accomplish this despite their shortcomings.

After that, the only things that should matter are the pacing and production quality. Does the movie spend too much time in between fight scenes? Maybe once or twice, but despite its over 2 hour run time the movie rarely slows down. Do the robots and monsters look cool, and is the DP smart enough to let us see them? Yes, the set pieces are detailed and varied, the CGI is blended well with the real photography, and the camera creates an immense sense of scale. Pacific Rim may not make you feel much beyond joy or awe, but it delivers more of those two than your average dumb sci-fi movie.

Now it wouldn't feel like a Screening Notes review if I didn't talk briefly about the thematic value of this jumble of nonsense. There are several missed opportunities to get the movie's mental juices flowing. The idea that "we created monsters of our own" is never developed (not only is the idea abandoned, but the "monsters" we created end up as heroes), and the memories shared in the drift are experienced as little more than obstacles when they could have functioned as powerful morality tales or at least life lessons. The film ironically revels in quite a bit of disaster porn despite its spoken tendency towards utilitarianism. But if you're looking a stupidly fun science fiction film, this is one of the better examples you'll find in theaters this year.