The Hobbit: The Desolation of Smaug (review) 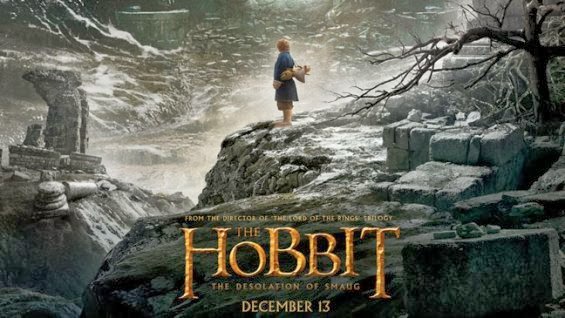 Let the "Smaug" pronunciation jokes commence. The Hobbit: The Desolation of Smaug (2013) is the second installment in Peter Jackson's new Middle Earth trilogy. The story picks up basically where The Hobbit: An Unexpected Journey left off: the hobbit Bilbo is traveling with the wizard Gandalf and a fellowship of relatively interchangeable dwarves to reclaim the mountain of Erebor from the evil dragon Smaug. The central plot is loosely adapted from J. R. R. Tolkien's children's book The Hobbit with a massive shift in tone to accommodate an older audience. Part two is an improvement over the slow and jumpy Unexpected Journey, but doesn't quite reach the level of quality of the Lord of the Rings series.

One of the central questions of Peter Jackson's Tolkien adaptations is whether the story is faithful to its source material. On the one hand, Jackson has stretched a 310 page novel into 3 2+ hour-long movies in an effort to include every last detail from the original story. On the other hand, in doing so he has also found it necessary to add elements of his own creation in order to make the story palatable to a general audience. I couldn't care less if a movie is faithful to its source material as long as it's enjoyable and interesting.* The only thing that matters for me is whether or not Jackson's additions and changes make the movie good, not whether they stay true to the original intent of the novel (they probably don't). Maybe making a line-for-line adaptation of The Hobbit would work on screen or maybe it wouldn't, but in any case the additions are here so let's take a look at them.

I haven't read The Hobbit in years, but one change I hear lots of complaining about is the addition of Tauriel (played by Evangeline Lily aka Kate from Lost). While I'm often one to loudly protest unnecessary romances added into unromantic movies, I don't actually mind this addition in principle. The story of The Hobbit is nothing if not romantic, and the interracial love story has a precedent in the Lord of the Rings movies. Tauriel's addition could continue an established theme running through the director's other work if it were executed well. The problem is that it's not.

Tauriel's two major romantic scenes jarringly interrupt the flow of the narrative. The first comes when the adventurers are captured and imprisoned by the wood elves. Thorin is characteristically stubborn, Thranduil is impressively menacing, and the fellowship seems doomed to miss their brief opportunity to take back Erebor. Then, instead of maintaining this dramatic tension, we get some sloppy flirting. This emotional dissonance interrupts the film's momentum, something which is important to avoid when your movie runs beyond the two and a half hour mark.

Okay, whatever, the movie gets back on track pretty quickly and doesn't get distracted again until much later. Bilbo infiltrates Erebor and tries desperately to find the MacGuffin Stone, but Smaug wakes up and the two Sherlock stars have a battle of wits. Smaug tires of their verbal sparring and tries to set fire to Bilbo, but the dwarves come to his rescue and together the group develops a plan. Then, just when your excitement reaches its peak, the film cuts to Tauriel taking care of Kili back in Laketown. This is not the time for that! Tangential love scenes come before or after the battles are over, not during them! Haven't you ever seen a movie before?

So in the end I didn't like the addition of Tauriel because of the jumpy way her story contrasts with the rest of the narrative. One of the most disappointing things about Desolation however is that she's not the only thing that doesn't quite fit. Especially during the final act, the film tries to juggle too many subplots at once. There's the central plot of stealing the MacGuffin Stone from Smaug, but then along with Tauriel chasing Kili there's also Legolas chasing Bolg and the Orcs, Gandalf searching for the Necromancer, Bard dealing with the political corruption in Lake-town, and a few more spoiler-ridden stories you'll have to go to the movie to see (or read about elsewhere). This movie is all over the place at times, and strangely very few of these tangents have anything to do with the titular hobbit. Might as well call this movie More Middle-Earth 2: The Sequel. (Not that more Middle Earth is bad in itself, it just needs to flow more naturally.)

The digressive nature of his storytelling is part of what makes Peter Jackson's Tolkien adaptations so much fun. The abundance of side quests and secondary characters brings the world of Middle-Earth to life in a way not achieved by most other fantasy franchises. The story might jump around, but in doing so it creates a beautiful and somehow relatable mosaic of familiar life in a foreign world. In fact, one of the most exciting elements of Desolation is the way it sets the tone and prefaces the events of the Lord of the Rings movies. But from this arises the inevitable, unfavorable comparison of Unexpected Journey and Desolation with the superior trilogy which follows them, and where the original trilogy progressed forward down a logical path, the Hobbit feels much more scattered.

But of all this, the biggest problem I had with Desolation is the lack of character development. After two long movies with these dwarves, the only two we know anything about are Thorin and (to a much lesser extent) Balin. The rest of them are interchangeable comic relief. Kili begins to stand out minimally in this film, but we ultimately learn nothing more about him than that his mother thinks he's too adventurous and maybe that he has a thing for elves. The only reason this makes him stand out is that we know literally nothing about the rest of them. The best scenes are between Bilbo and Thorin because they actually have characteristics we can relate to beyond eating a lot, drinking a lot, and being idiots. This lack of character development takes its toll by making a large portion of the subplots uninteresting. I don't care if Kili dies because I have no idea who he is. You know you have a problem when Azog the Defiler has more charisma than some of your protagonists.

This is the real reason to be upset with Tauriel. What is Peter Jackson doing introducing new characters when the ones he already has are just shells with no internal definition? You've already got 13 dwarves, do something with them so that maybe we feel some sort of emotion when the party is split in two! Remember at the end of Fellowship when the group has to part ways and you actually cared about each separate party? Remember the tragic (if inevitable) death of Sean Bean? Those moments carried emotional weight because the characters in them actually interacted with other characters rather than talking over each other until being silenced by Thorin. Show us why we should care about your silly nonhumans before you put them in danger.

All this might make it sound like the movie is nearly unwatchable, and this couldn't be further from the truth. The action is incredibly exciting even if it's occasionally interrupted by tangential storylines. The visuals are stunningly beautiful even if it often relies on CGI where practical effects might feel more genuine. The acting is fantastic even if the characters being portrayed lack some detail. The movie definitely feels like it's over two and a half hours long, but if you're a fan of Jackson's Middle-Earth you won't mind sitting through the slow scenes. The Hobbit: The Desolation of Smaug is a good enough movie, but especially with the expectations set by the Lord of the Rings trilogy it just could have been so much better.