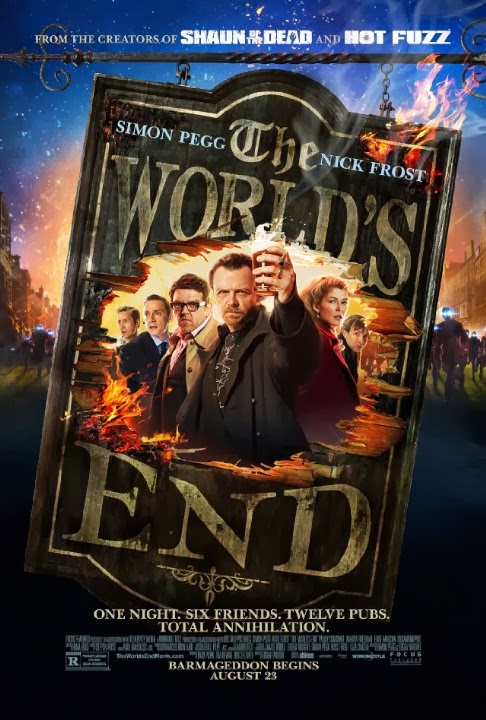 The World's End (2013) is the final installment in Edgar Wright's Cornetto Trilogy, a series of parodic genre films. While each film contains generic elements borrowed from every category of film you could think of, each also more or less reproduces one traditional story arc (albeit with hilarious embellishments). Shaun of the Dead (2004) indicated its horror film foundation with its titular reference to Dawn of the Dead and the zombies it features, Hot Fuzz (2007) payed homage to its action film roots with recreations of scenes from Bad Boys and Point Break, and now The World's End alludes to the science fiction genre by staging a narrative involving extraterrestrial robots. One of the reasons these movies are all so enjoyable is that they're filmed at least as well as the movies they refer to (the action sequences are especially engaging and well-shot), but the reason I love this trilogy is the way it constitutes a series of love letters to the cinematic medium.

So if Shaun of the Dead is basically Dawn of the Dead and Hot Fuzz is basically Bad Boys, what is The World's End? My wager is Invasion of the Body Snatchers. The movie contains several visual and thematic references to both the original and the 1978 remake.

The first is the simple similarity between the science fiction elements. In the two Invasion movies, certain people begin acting strangely, a sign that they are becoming "pod people" or "pods". They become emotionless (you could say "robotic") shells of the people they once were. When the group of friends returns to their home town in The World's End, everyone is still there but there's something not quite right about them—they've been turned into inexpressive robotic replicas of their former selves.

In both cases there is no obvious outward sign that the people are any different, and the change is instead discovered by intimate knowledge of the people they used to be. The protagonists notice the changes in small, almost indescribable differences in their behavior. This fear of people not being who they appear to be comes from something called the Capgras delusion, in which subjects believe that their friends or family have been substituted with someone or something else. This delusion and these movies ultimately draw upon the uncertainty surrounding identity as such and the question of what makes us who (we think) we are, a question taken up often by science fiction (Blade Runner, The Thing).

Other similarities include the arms out, mouth wide iconic imagery (Invasion remake; World's End), and the speeches used in the robots' attempt to convert the protagonists with promises of peaceful mindlessness as respite from their current state of self-aware conflict (Dr. Kaufman in the original Invasion; Elizabeth Driscoll in the remake; Guy Shepherd in World's End). The movies obviously have their differences, but I greatly enjoyed the allusions. The World's End borrowed enough to make it feel classy but changed enough to make it feel like they're not just stealing.

Final Notes:
- If you're looking to tie the two halves of the movie together (the personal drama & the science fiction), the simplest answer is nostalgia. Gary King (Simon Pegg's character) longs for something from his old life that has gone missing, and his encounter with the alien robot things is a metaphor for his battle to overcome his sense of loss. There are references to this theme in the beginning, middle and end of the story, and his ultimate refusal of the opportunity to return to his old body signifies his success.
- The Wizard of Oz?
- For more on Invasion of the Body Snatchers, check out my article here.
- Despicable Me 2 also makes reference to Invasion of the Body Snatchers!
analysis Capgras delusion comparison Cornetto Trilogy film homages Invasion of the Body Snatchers meaning movie Nick Frost references review robots sci-fi similarities Simon Pegg The World's End