Frozen: The Hero and True Love 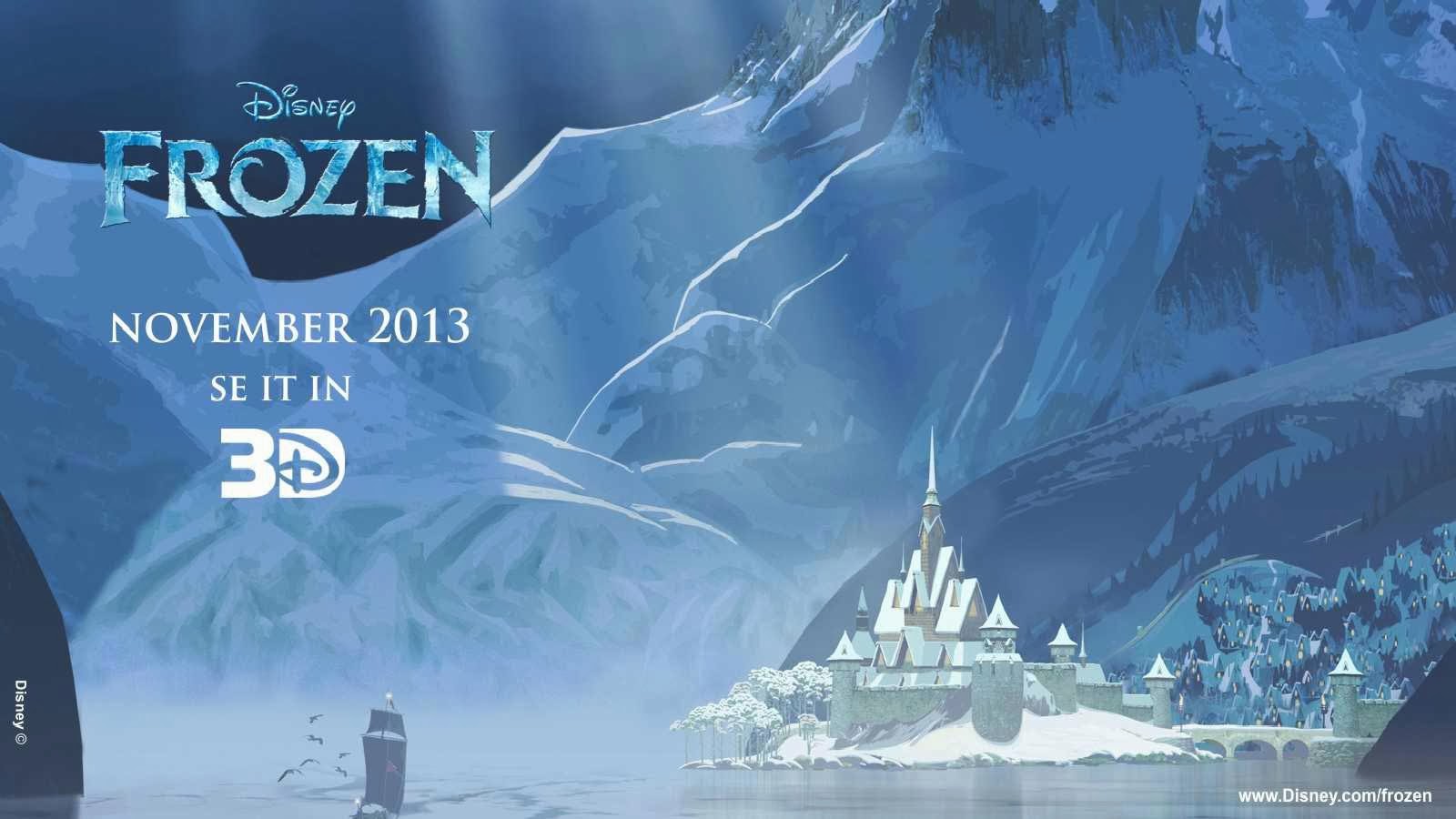 Frozen is the newest animated feature film from Disney Animation Studios and is, as many Disney movies are, a movie for children. So why should you care about it? You're a grown woman and/or man! Sure, you may have enjoyed The Lion King back in its day, but we're in the middle of awards season and can watch Big Kid Movies like The Wolf of Wall Street. What's more, if you've seen anything on television or even in theaters about Frozen it was probably limited to the fact that there's a cute snowman and a cute reindeer and they get into cute wintery high jinks. There's much more to the film than that: it has an actual story with actual characters, and more importantly it enacts a reversal of two major ideological trends characteristic of Disney and Hollywood.

So in case you weren't aware, Frozen is a loose adaptation of Hans Christian Anderson's fairy tale The Snow Queen. The story revolves around Elsa, a princess born with forbidden magical powers, and her naive sister Anna, whom she accidentally injured with said powers as a child. Their parents keep them apart until Elsa can become queen, and on the day of her coronation their volatile reunion leaves the town of Arendelle frozen and Princess Elsa in exile. Anna goes on a quest to convince her sister to return, but the obstacles she must face are more than her sheltered life has prepared her for. 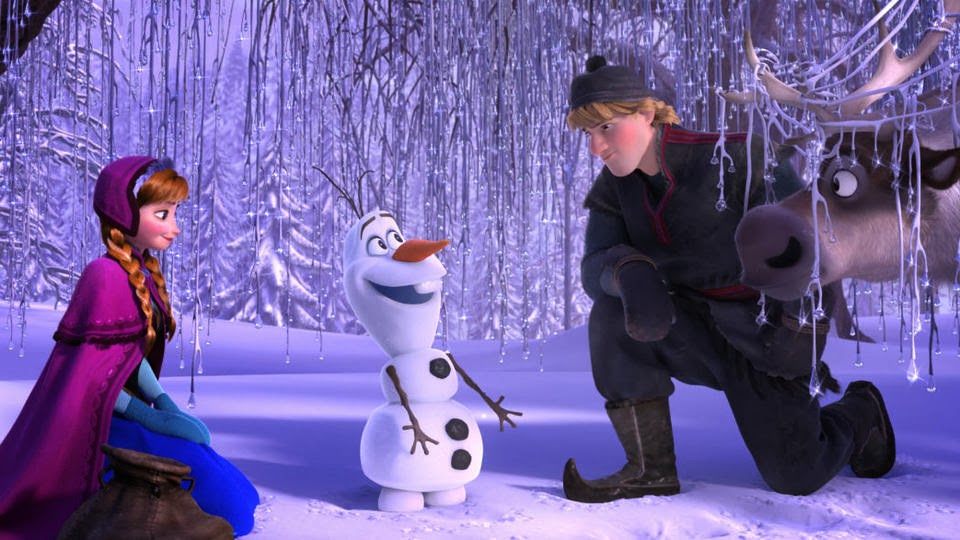 A few selling points before I jump into my analysis of the film. Frozen is first and foremost a very good looking movie. The animation studio created groundbreaking snow effects and Elsa's magic is detailed and majestic. The plot is a bit simple but it's fast-paced and the character arcs are deeper and more nuanced than we usually get from movies for grown-ups. Olaf is absolutely hilarious and often steals the scenes he's in. The songs are all great and I don't even like musicals. But more than anything else, the reason you want to see Frozen is because of the way it engages in a critical discussion of two major Hollywood stereotypes: The Hero and True Love.

If you look back at all the Disney Princesses, one thing the majority of them have in common is being rescued by The Hero. In chronological order, Snow White, Cinderella, Aurora, Ariel, Jasmine, Pocahontas, and even Rapunzel are all to some extent saved from dire situations by men. In most of these cases, the princesses are the protagonists (I think the only real exception is Jasmine in Aladdin), but in the sense that their agency is limited by their reliance on their Heroes they're not even queens in their own castle. This is where Frozen changes things: not only is Anna a wonderfully persevering agent of her own destiny, even the world she inhabits is ruled by women. Both the central conflict and its resolution are orchestrated by Anna and Elsa with the men in the story limited to supporting roles.

Spoilers ahead, so if you haven't seen this movie and don't want anything spoiled for you then skip down to the picture of Anna and Hans holding hands.

At the beginning of the movie, Hans is set up as the Hero and love interest for Anna. They get engaged and he agrees to protect Arendelle while Anna searches for her sister. Anna returns to the town after being wounded by Elsa, hoping that a kiss of true love will save her. But after revealing that he never loved her, Hans leaves Anna to die so that he can become king. This conversation follows:


This scene is a reference to and retelling of Sleeping Beauty, an archetypal story which has haunted Disney's princesses for over 50 years. The structure of the story is similar to Frozen: a witch (Maleficent, Elsa) casts a spell on a princess (Aurora, Anna), incapacitating her until broken by true love. In Sleeping Beauty, however, the interchange is mediated by the Hero. Prince Philip must save the day by defeating Maleficent and bringing Princess Aurora back to life with a kiss. It is a world of women which is ultimately ruled by a man. Elements of this structure can be found in almost everything from Disney's first feature Snow White and the Seven Dwarves to more recent films like Tangled.

Frozen critiques the role of the Hero by revealing Hans, the Prince Philip stand-in, as a conniving and manipulative egoist. This twist also gives the lie of self-perceived heroism: it's not saving the town that makes you a hero, but how you do it. Methods matter. Heroes are only heroes from a certain perspective, and Frozen is nothing if not a change in perspective. The film's real Hero (Anna) saves the day not by destroying her enemies but by helping them. Hans is discovered, Anna and Elsa reunite, and the women are left to rule their world. The protagonist is not the Hero of Death, but the Hero of Love.

Frozen also enacts a change in perspective with regard to True Love. Specifically it questions the idea of love at first sight and the idea that if you find the right person love is easy. Anna gets engaged to Hans the day she meets him, and the song "Love is an Open Door" succeeds in making it feel silly while it's happening and Kristoff brings it up again later as a punchline. You don't fall in love with someone the day you meet them, it's a process which takes place over time. This is reinforced by the trolls' song "Fixer Upper" which takes the position that everyone has their imperfections and "true love" is a situation where each person brings out the best in the other. People aren't born perfect for another person, love is about work and making another person happy by helping them be the best version of themselves they can.

The second change in perspective regarding True Love again involves another twist (it's basically the same one as before if you were naughty and skipped through the last spoiler alert), and it's the last point I'm going to make, so there will be spoilers until the end of the article. If you're curious, definitely don't hesitate to go see Frozen regardless of how old you are. As with all great Disney films it has something for everyone. Highly recommended especially if you have a sister or are a sister.

Final Notes:
- The ultimate irony of Frozen is that a movie which successfully challenges traditional storytelling methods could of course not be advertised on those merits. US posters present Olaf the snowman as if he's the main character and some trailers even omitted the sisters entirely. Don't get me wrong, Olaf is great and the movie wouldn't be the same without him, but he's not a central element of the narrative and his character functions mainly as exposition and comic relief. I know it's a kids movie, but you have to convince the kids' parents to take them. Children can't drive.
- Rating Frozen PG was a slightly odd decision on the part of the MPAA. There are a few moments of emotional intensity which may be difficult for some children, but it's certainly no worse than Bambi. That's not even what it's rated PG for though. It earned its rating for "mild action and rude humor", so basically because it's fun and it has jokes for grownups. If you're a parent reading this, there's nothing that will sully the mind of your child. Check out this great article over at Forbes if you'd like to know more about Frozen's rating.

(For a kids movie, this is the best in recent memory. If you disregard genre it might feel simplistic at times, but there is some real emotional depth to it.)
advertising analysis Disney feminism film Frozen hero heteronormativity ideology male-dominated movie phallocentric princess rating review sexism theory true love women