The Counselor as Experimental Film

The Counselor was one of the most divisive films of 2013. Its detractors criticize it for failing in all the same areas where its fans praise it for succeeding: it's either contemplative, philosophical, and literary, or soporific, uninteresting, and superficial. However, turning the tables a bit to look at the film from a slightly different perspective reveals something in it which should interest any movie lover whether or not you enjoyed watching it. The structure of the movie is unique especially for a production with such big name talent attached to it. The Counselor runs much more like an experimental film than a blockbuster, which makes sense with a first-time screenwriter but is nonetheless surprising given its professional appearance. Whether or not you think it worked is a matter of personal taste; I want to look at how it rewrites the laws of the screenplay.

So what's different about The Counselor? In a word, it is incredibly simple. The film is structured almost exclusively as one-on-one dialogues with little or no connective tissue in between. Two people, in one room, talking. 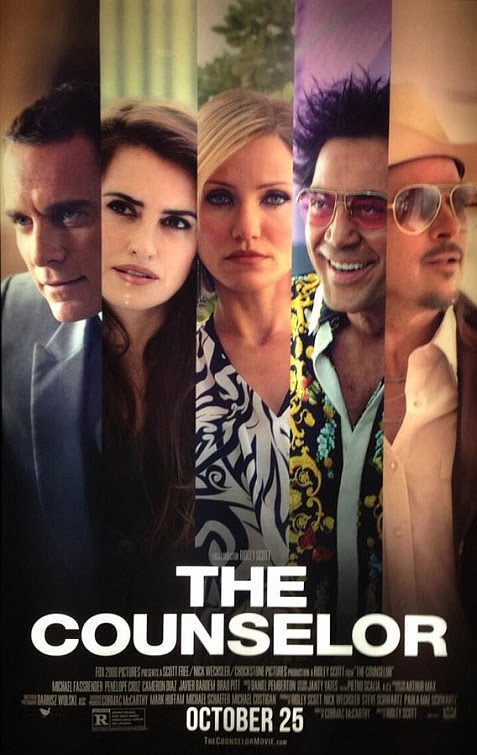 In the movie's first scene, the nameless Counselor and his girlfriend Laura are doing some dirty talk. No one comes in or goes out and the camera never leaves the room. No flashbacks of their past or how they got there, no cross cuts to something happening elsewhere, nothing. Even the conversation they have is limited to the scene in which it takes place: they talk about the sex they're having, but the only thing remotely expository or tangential is a quick vaguery about the Counselor's past sex life. The entire world for the first five minutes of the movie is this room and the two people in it. Roll opening credits.

The credits play alternately over people loading drugs into a truck and Reiner and Malkina watching their cheetahs. We learn that the drug truck is headed to the United States and nothing else. Enter dialogue number two. Reiner and Malkina talk about truth and death and the past, but it's all in extremely indeterminate and amorphous language and still provides no hint at what the movie you're watching is going to be about. This indeterminacy establishes a pattern for the film's dialogue: the characters tell you what's going on, but the language they use is obscure enough that they could be talking about anything. When the Counselor says he's "in" we're never told what he's "in" on. He talks with Westray about finance, but they never mention what he's paying for or investing in.

Cut directly to the Counselor in Amsterdam buying a diamond. Wait, Amsterdam? Did Laura come with him? How much time has passed since their lovemaking? Did he wake up and go straight to the airport? What is she doing while he's out of the country? The movie doesn't care. The Counselor has his conversation with the diamond dealer and then we move on. Next scene. He arrives at Reiner's house where there seems to be some sort of party. Okay, so now he's back in the States? How does he know Reiner? Was he invited because it's a party or did they plan a meeting? What are they even talking about? It doesn't matter. Next scene.

The lack of exposition in between the conversations is almost as striking as the simplicity of the scenes themselves. 28 of the movie's 32 dialogue-driven scenes have one person talking to one other person. There are occasionally other people in the scene, but they never have spoken dialogue. In an exception which proves the rule, the Counselor and Westray have an 8 minute conversation which is interrupted only once by a waitress saying "thank you" to a generous tip. They have no further interaction, and she exits stage right never to be seen again.

So what's the point? What does this simplicity of composition achieve for the film? This is where subjective judgments can begin to seep in. Objectively speaking, it hides large portions of the story from the audience. This is actually my favorite aspect of the movie. We don't see the plot happen, we hear about it from the main characters. The movie's expository minimalism heightens the sense of mystery surrounding its narrative and lends it an intimacy rarely achieved in this plot-driven genre. This structure can have different effects on different people. It can increase tension for an audience interested in what's happening, but it can also induce boredom in an uninterested party. Nothing "happens" on screen because actions and reactions are relayed through dialogue, and this can either be intriguing or sleep-inducing.

Personally I had a horrible experience with The Counselor. I thought the dialogue was stilted, the characters felt oversexualized and occasionally downright misogynistic, the themes failed to peak my interest outside of three monologues, and aside from Reiner no one seemed to transcend their respective stereotype. Yet I've spent more time thinking about it than movies I actually enjoyed watching. If The Counselor was one of your favorite movies of the year I wouldn't blame you. It's a well-made and well plotted movie and there's something very unique about its structure. I was ultimately uninterested in its message and bored by its execution, but that's because of my personal taste not an inherent shortcoming of the film. The Counselor plays by its own rules, and that definitely counts for something.

Hey readers. So, I spent way too much time thinking about this movie. One of the results of that is this scene-by-scene outline of the movie. I was originally going to integrate it into the article, and while it ended up not being practical I still wanted to share it since it's part of what I find interesting in the film. For the record I made it using the Extended Edition, a cut which added in two or three scenes and lengthened many others (interestingly it also rearranged a few scenes very slightly). There are obviously spoilers.

If you're interested in reading more or want a different take on the movie, I wrote two mini reviews of The Counselor over on Letterboxd. The first is here, and it's much more negative and reactionary since I had heard the film being called things like "literary" and "philosophical". I don't particularly recommend it as it's more mean-spirited than the second, but if you didn't like the movie it'll probably be fun to read. The second is here, and it's much more balanced and takes into account both sides of the movie. I like it a lot more as it expresses my critique in a way that also shows my appreciation for the movie's originality and doesn't try to tell its fans that they're wrong. Also if you like movies you should totally get on Letterboxd. It's way too much fun.
analysis background character composition conversation critique dialogue disagreement divisive explained film form movie overrated review screenplay story structure The Counselor underrated