Superman Returns vs Man of Steel 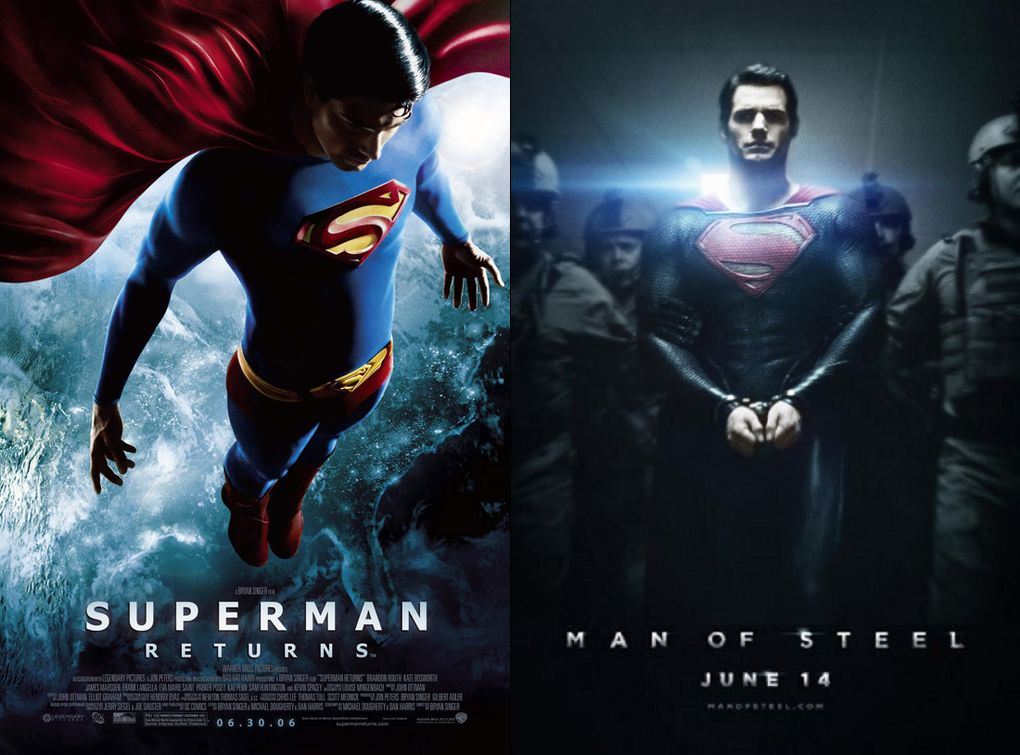 I don't know anything about comic books or comic book heroes and I certainly don't know anything about Superman. What I do know about is movies, and Superman Returns might not be the best one out there but it works. It has a story which makes sense all the way through, characters which are sympathetic and consistent, and a conflict involving two opposing ideologies. It might not sound like much, but it's the kind of cohesion often lacking in the sea of mediocrity to which most films belong.

There are three basic things going on here. There's Clark's internal struggle, his conflict with Lex Luther, and both characters' relationship with Lois Lane. Plug these three ingredients into the story machine and you have yourself a movie. 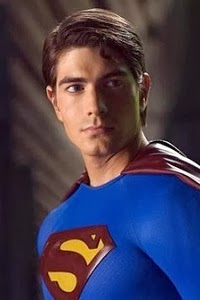 "Even though you've been raised as a human being, you are not one of them. They can be a great people, Kal-El, they wish to be. They only lack the light to show the way."

This is some of Superman's remembered wisdom from his father, Jor-El, and it encapsulates perfectly the conflict which defines Superman's character arc. At the beginning of the movie he tries to fit in as Clark Kent. He tries to be "one of them". But then an electrical malfunction causes a crisis on an airplane carrying a space shuttle which cannot detach and cannot abort its launch sequence and Superman is needed. He knows that he is the only one who can save them in time, and that he must lose the guise of Clark Kent to do so.


As the story progresses and he encounters more situations in which his exceptional status is necessary, he begins to accept that he cannot simply fit in. In the final scene he shows up to Lois's house as Superman and repeats his father's wisdom to his son, indicating that he has finally accepted his identity. He cannot be one of them, but he can lead them and help them find the right path. He takes the advice given to him and uses it to develop as a character, making for a compelling journey for the audience. He is the ethical center of the film, a man with morals who brings hope to the masses in the movie and the audience watching it. 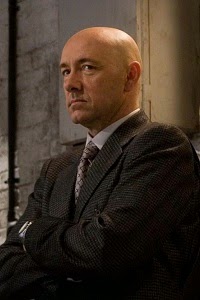 "Prometheus was the god who stole the power of fire from the other gods and gave control of it to mortals; in essence, he gave us technology, he gave us power. You see whoever controls technology controls the world... I just want what Prometheus wanted. Gods are selfish beings who fly around in little red capes and don't share their powers with mankind. No, I don't want to be a god, I just want to bring fire to the people. And I want my cut."

Here Lex Luther establishes two things: his own position as a power-hungry technocrat and his conflict with Superman. He is jealous of Superman's power and wants something like that for himself. He has an ideology of his own which contrasts with Superman's generous justice. His purported generosity and delusions of grandeur are merely window dressing to make his quest for world domination more palatable. He says he wants to "bring power to the people" and just wants "his cut", but when you remove the rhetoric he's still trying to take over the world. At the same time, presenting his plans this way makes them more understandable and resists making Luther into a caricatured evil supervillain. Being able to relate to the villain makes the conflict more compelling.

What he denies in words he makes clear in his actions, and later he shows himself willing to sacrifice countless lives to accomplish his own goals. He calls Superman selfish while he sacrifices his own desires to save the people Lex put in danger. The two contrast perfectly: our hero has power thrust upon him and over the course of the narrative he decides to use it for the greater good, and our villain seeks power that doesn't belong to him for reasons which are as megalomaniacal as they are evil, the perfect recipe for a villain. 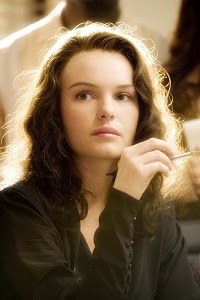 Let's talk about Lois Lane. I'm going to be totally honest, when I saw the love triangle developing between Clark, Lois, and Lois's husband Richard, I groaned. I hate love triangles, especially when they clutter up my silly sci-fi action movies. But this is not clutter. This is there for a reason. It cross-pollinates the two other story arcs and helps them grow in a way that feels natural and uncontrived (except maybe when Lois brings her kid onto Luther's boat).

On the one end, Lois provides a concrete touchstone for Superman's internal struggle. He wants to fit in with the humans primarily so that he can be with Lois, but he realizes that Spock was right, that the needs of the many outweigh the needs of the few. She is a solid marker of his desires as they contrast with his morals. As he flies out to sea to save her he sees the earth splintering below and realizes he must return and save Metropolis before he can save Lois.

On the other end of things, she is also a talented reporter and helps draw out the conflict with Lex. The audience gets to see his evil plans in their inception which causes frustration when the editor-in-chief Perry White wants to focus instead on Superman's return. Lois's desire to cover the blackout that begins the movie provides us with a logical center to the film, someone in the masses who still has her brain turned on and whose inquisitiveness propels our crisis forward.

Now let's take a look and what the more recent Man of Steel does in these same areas. 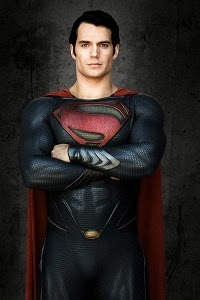 Superman receives conflicting advice from his biological and adoptive fathers. Biological Space Dad gives similar advice to what is given in Superman Returns: "You will give the people of Earth an ideal to strive towards." Adoptive Farm Dad disagrees and instead advises isolationism: "Clark, you have to keep this side of yourself a secret." Here we have the elementary coordinates for character development. Throughout the course of the narrative Superman will presumably have to make a choice about whether to strive towards an ideal which will inspire those around him or hide his identity until Earth is ready.

Except he doesn't. Sure, he eventually dons his iconic cape and tights, but it's never clear what he's supposed to stand for. We're told the "S" on his costume stands for "hope", but we never see Superman do anything which would inspire hope. We get the outline of an ethical guideline in the writing, but none of it ever finds its way into the action of the film. Superman beats up General Zod, but he destroys Metropolis in the process. The movie gets so caught up in its own violence that it forgets to make concrete the moral backbone it attempted to sketch out in the script. 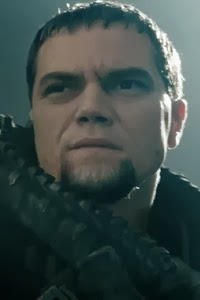 Then there's Man of Steel's villain, General Zod. Like Dorothy, he just believes there's no place like home and wants to create a new Krypton. The problem is how he wants to go about doing it. First he wants to destroy all humans ("You're talking about genocide." "Yes!"), then he wants to maintain genetic purity ("Krypton's first natural birth in centuries..." "Heresy! Destroy it!"). He wants his own perfect little planet so he can create his own perfect little race. So Zod is literally Hitler. Great.

Superman is the ideal, perfect hero, so why not pit him against the ideal, perfect villain? If Superman has to save the world then why not save it from Hitler? The problem is that there are no ideas strong enough to clash with Zod's tyrannical imperialism. Even if you don't buy my argument that Superman never adopts any of the principles he's given, which of those ideas is enough to counterbalance Zod? Can we defeat Hitler with hope? Instead of two opposing ideologies we get two aliens punching each other.

Of course there's another way to look at Zod in today's paranoid post-9/11 world: as an interplanatary terrorist. This doesn't fit his stated ambitions quite as well, but all the visual coordinates are there, especially the panicked mobs running screaming from collapsing buildings. But this also highlights the ultimate failure of the conflict between Superman and Zod. How can we even say that Superman is the hero of anything when he allowed so much death and destruction? If Zod is a terrorist, Superman embodies the violent countermeasures which ultimately bring about the very same results they're intended to prevent. He's the allegorical Guantanamo Bay to Zod's Osama Bin Laden. The city is destroyed either way. He's no hero, he's simply as powerful as he is misguided.

Don't get me wrong, Superman Returns isn't a great film. It lacks the depth and technical mastery which might make it truly exceptional. It's a bit longer than it deserves to be, most of the performances aside from Kevin Spacey's Lex Luther are pretty bland, and while the blue-green and orange color palette does a good job emphasizing the red and yellow of Superman's insignia, it rarely stands out from the infinity of science fiction colored this way.

And conversely Man of Steel isn't the worst film ever. Its fight scenes are entertaining if you don't mind the lack of depth or meaning behind them. The conflict between Superman's two fathers is well set up even if it's ultimately not explored as well as it could have been. Its washed out colors and use of sepia tone undeniably give it a unique visual style even if it didn't really work for me.

But where the mediocre presentation of Superman Returns fails, its cohesive and well-drawn story succeeds. It might not be the best superhero movie out there, but it actually has characters and conflicting ideas, and more than anything that's what I want from a story.

Quick Zizek-style reading (SPOILERS): Clark Kent is driven around the objet a of justice, but finds himself tempted to give up his drive and attempt to live a normal life as a news reporter. Conflicted by his growing sense of morality, he is compelled to live his live behind a mask, hiding the identity he desires in order to pursue his drive.
Succeeds because:
- gives up desire for drive
- acceptance of drive involves repetition of loss (of Lois, of his identity)
Problematic because:
- "evil resides in the very gaze which perceives evil all around it"


Quick Zizek-style reading (SPOILERS): Clark Kent lives in a world whose existense is threatened by the interplanetary Nazi-terrorist Zod. He joins with the military to bring an end to this threat by (indirectly?) destroying the very city Zod wanted to destroy.
Succeeds because:
- ???
Problematic because:
- the protagonist accomplishes the antagonist's goals for him
analysis character comparison film ideology l Lex Luther Man of Steel movie review Superman Returns Zod