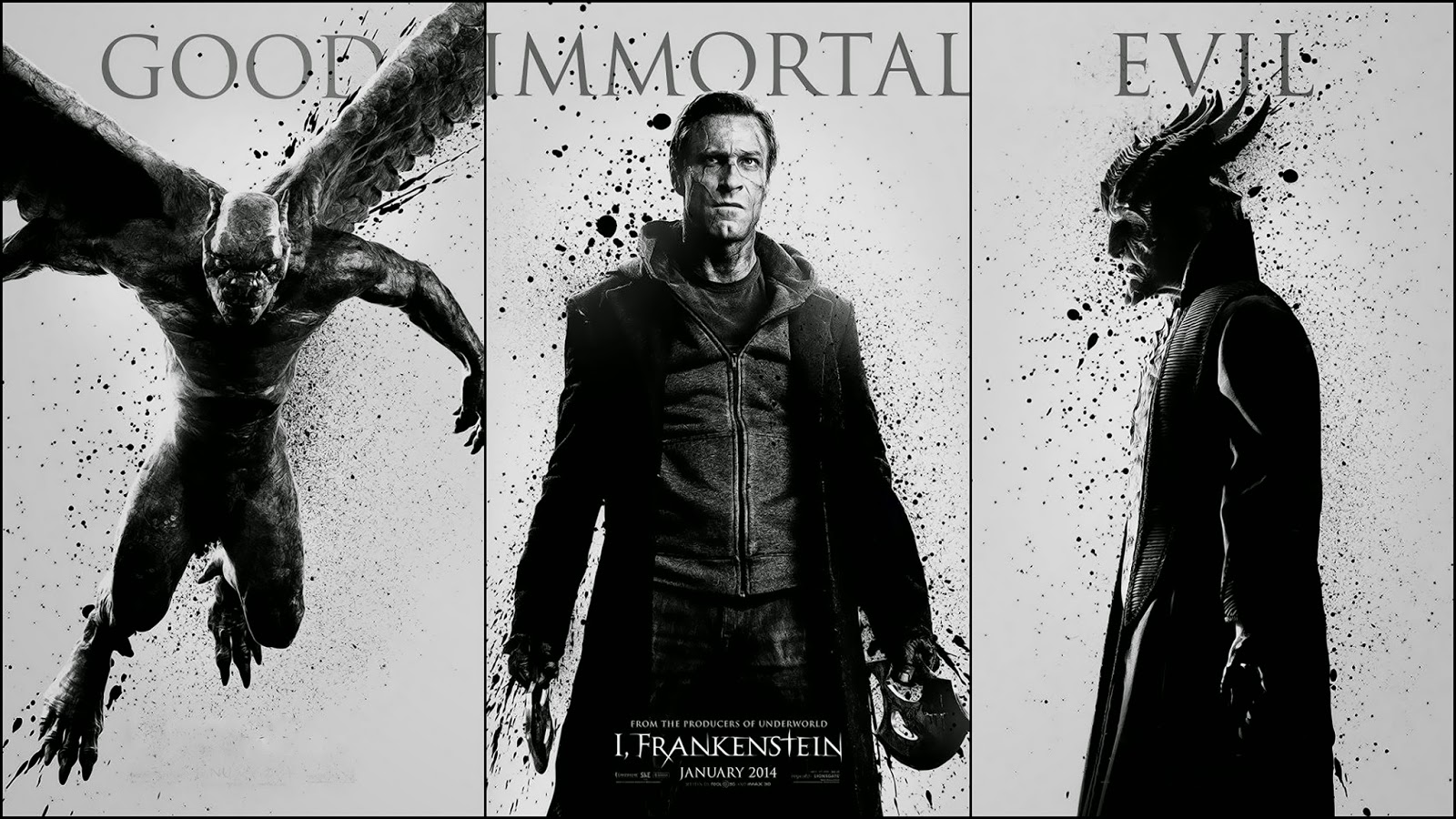 I, Frankenstein (2014) is a special effects-driven action-oriented creature feature and the second directorial effort of Stuart Beattie, the man who somehow wrote both Michael Mann's lovely thriller Collateral (2004) and Stephen Sommers's campy b-flick G.I. Joe: Rise of Cobra (2009). It is a movie you probably didn't see in theaters, probably won't see now that it's out on home video, and I'm here to tell you not to see it, so if that's all you wanted to know then thanks for your eyeballs and please come again soon. It's definitely not a good movie, but for me there's something interesting buried beneath the rubble (although I also find enjoyment in the garbage churned out by The Asylum so I'm a pretty unreliable source of praise). I, Frankenstein attempts to stage a conflict between good and evil centered on the ideological debate regarding the religious value of life in itself against the ethical value of a life's purpose. That's right, folks: Frankenstein has gone pro-life.

So the story is that for hundreds of years a war has been waged beyond human perception between the gargoyles, led by Leonore (Miranda Otto), and the demons, led by Naberius (Bill Nighy). (I guess a war between angels and demons would have been too heavy-handed.) Frankenstein's monster "Adam" (Aaron Eckhart) enters the action somewhere in the middle: he has no soul with which to be good or evil and can therefore belong to neither clan, so the two sides fight over possession of his body and abilities. Two-Face must decide between fighting Eowyn or Davy Jones.

The demons want his body to study scientifically in an attempt to create an army of reanimated corpses to use against the gargoyles and afterward humanity. The gargoyles mostly want to keep him alive because it's "not for you or I to deny God's purpose", and since God let him live for over 200 years he's apparently in the good book despite his unnatural birth. I say "mostly" because there's a point at which they decide to try and kill him for a little bit to generate an additional fight scene, but it doesn't last long. In any case, the two armies eventually meet and have a final boss battle before the credits are permitted to roll.

Points to note: the demons desire for Adam is purely scientific whereas the gargoyles constantly phrase their desires in religious terminology ("All life is sacred," "God is no longer the sole creator of man," "God's purpose," "sacred duty," etc., etc.). Along with the predominant discourse surrounding Adam's purpose, the value of his life, and the circumstances of his creation, this clearly foregrounds the conflict in terms of the debate between pro-life and pro-choice ideologies. The pious gargoyles disagree with the method of his birth (artificially created by man) but cannot kill him now that he's alive, whereas the secular demons want to conduct tests on him which may be fatal in the interest of the pursuit of knowledge.

Given the overt good/bad dichotomy between the two sides (gargoyles "ascend" when they're killed while demons "descend") it's clear to see which side the filmmakers are on. Their position is even reinforced in the finale: after much debate over the purpose of Adam's life ("You're only a monster if you behave like one"), his success with the gargoyles is met by the statement, "You finally found your higher purpose." He has finally earned the life which has been given him by the grace of God, and simultaneously justified the gargoyles preservation of his life. All life is sacred since even a monster like Adam can find "higher purpose".

Final Notes:
- Frankenstein's monster is much sexier than I imagined.
- I, Frankenstein takes place in an alternate universe where everything makes a whoosh or shing at the slightest provocation.
- As a special effects calling card the film really could have been much worse.
2014 Aaron Eckhart abortion analysis Bill Nighy explained film God I Frankenstein meaning Miranda Otto movie pro-choice pro-life purpose reading religion review science subtext