Is The Wicker Man Remake Really "So Bad It's Good"? 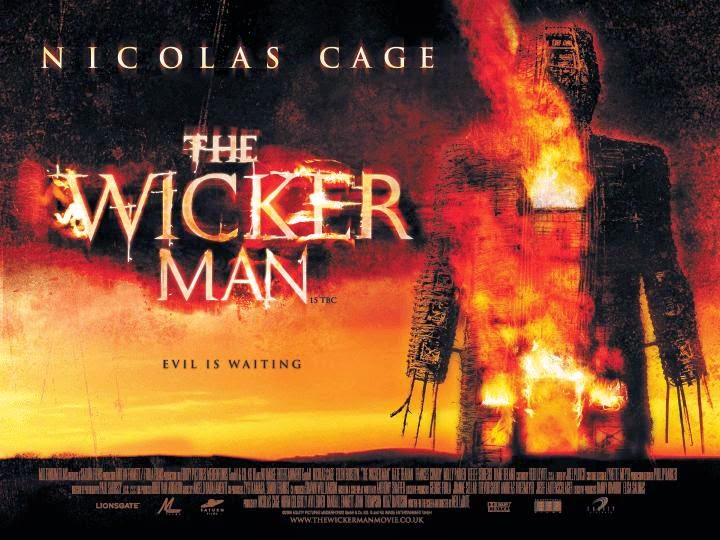 Robin Hardy's original The Wicker Man (1973) was about a secret society which required a man who conformed to a certain ideal. Specifically, they needed a Fool, and only by putting the officer charged with investigating reports of a missing young girl through a social experiment could they determine whether or not he fit the description. Neil LaBute's 2006 remake takes this idea one step further: it creates in Nicolas Cage a Fool so incredibly foolish that the film has become a cult "so bad, it's good" classic. But is there really anything "good" about it?

It was always going to be difficult to recreate the subtle and precise atmosphere which made the original installment unnerving. The film had to construct a society which was unbelievably strange and at the same time realistic enough not to laugh at. It had to give you the sense that something was deeply wrong with everything without devolving into the realm of farce. It had to tread the fine line between odd-unsettling and odd-humorous. When the remake succeeds at anything, it's only at odd-humorous. But mostly it's just dull.


It's unclear what exactly went wrong in production to make the film fall from its tightrope walk, but fall it certainly has. Among the evidence to discern the cause of this crime we have a cast of laughably misdirected actors and a screenplay with little to push the action forward beyond the simple lack of resolution. The movie seems to hope that between the alien performances of its characters and the absence of any narrative progress, the audience's curiosity will be enough to keep them in their seats.

But the most damning clue that the movie simply doesn't understand how horror works is its use of jump scares. In the opening scenes, a waitress at a diner jokingly says "Boo!" to a police officer sitting at the bar. Here we have the typical self-aware horror movie joke which theoretically acknowledges that it's going to try to get a rise out of us but that it will need to do more than that to succeed. Nothing wrong so far. The problem is that The Wicker Man doesn't do any more than that, it only knows how to shout "Boo!" at us. Through the rest of the movie there is a series jump scares which get increasingly louder but never have any setup, payoff, or narrative consequence. In the most extended of these, Cage is investigating an old building where he doesn't have to be and where he will find nothing, and he breaks a floor board and trips. "Oh no, is he going to fall?" the movie asks us. The audience collectively responds, "We don't care, just get on with it."


I was led to understand that this movie was entertaining on a level similar to Tommy Wiseau's notorious The Room, and I have to say this was simply not the case. Unlike The Room, here there are elements which would have worked (e.g. the soundtrack) if only the rest of the movie caught up with them. There are indeed moments of unintentional comedy, but they're few and far between. More than anything, The Wicker Man remake is simply boring. A closer analogy would be the recent Total Recall remake, which, however lacking in accidental laughs, similarly suffered from a failure to recreate what made its source material exceptional.

As someone who is normally generous to remakes, let me tell you that The Wicker Man is not worth your time. If you're curious, just check out the highlights on YouTube. Or if you do need to watch it, make sure to bring some friends along to laugh at it with you, because otherwise you might just fall asleep.

For a film which is actually "so bad it's good"—or perhaps which is good because it's so good at being bad—watch Sharknado instead.