Why Should Snowpiercer Make Us Angry? 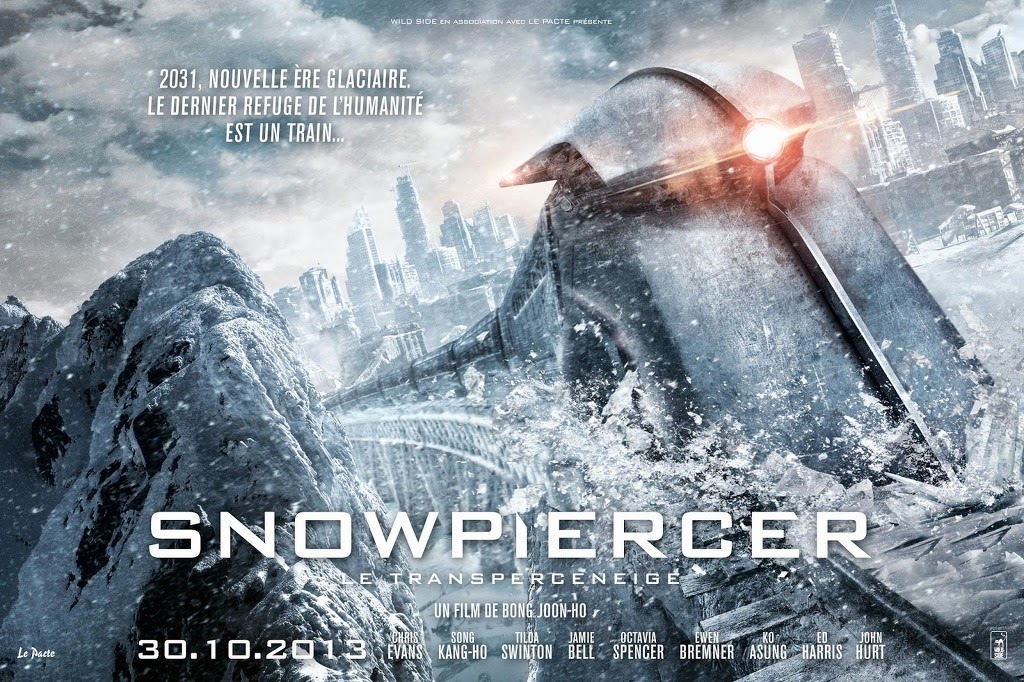 Snowpiercer (2013) is a dystopian science fiction film from director Bong Joon-ho which was shot in Korea but written in English (for the most part). You're lucky if there's a theater near you playing it though, because it had a difficult time finding its way to America. The Weinstein Company, who picked up American distribution rights for the film, demanded the director cut out 20 minutes or the film wouldn't make it to the US. As any good director would, Bong declined, and thanks to popular uproar the film has finally made its way unedited to the States. Weinstein's revenge? Limited distribution. Despite nearly universal critical acclaim, Snowpiercer is being denied the chance to really succeed financially, and that's a shame because it has what most American blockbusters lack: purpose.

Like many science fiction films, Snowpiercer expresses frustration with the status quo. The world is covered in snow after an attempt to alleviate the effects of climate change overcompensates and sends the planet into deep freeze. The only survivors live on a train which circles the globe once per year, but this new society was not created equally. Curtis (Chris Evans) and his tail-end companions (John Hurt, Jamie Bell) constantly feel the oppression the their front-end rulers, embodied in the terrifying eccentricity of Minister Mason (Tilda Swinton). But the tail-enders have a plan which will throw the new order out of balance. Through this conflict, the film plays out frustrations surrounding class and the tension between the 1% and the 99%. The difference between Snowpiercer and the majority of American blockbusters is how this tension is resolved. 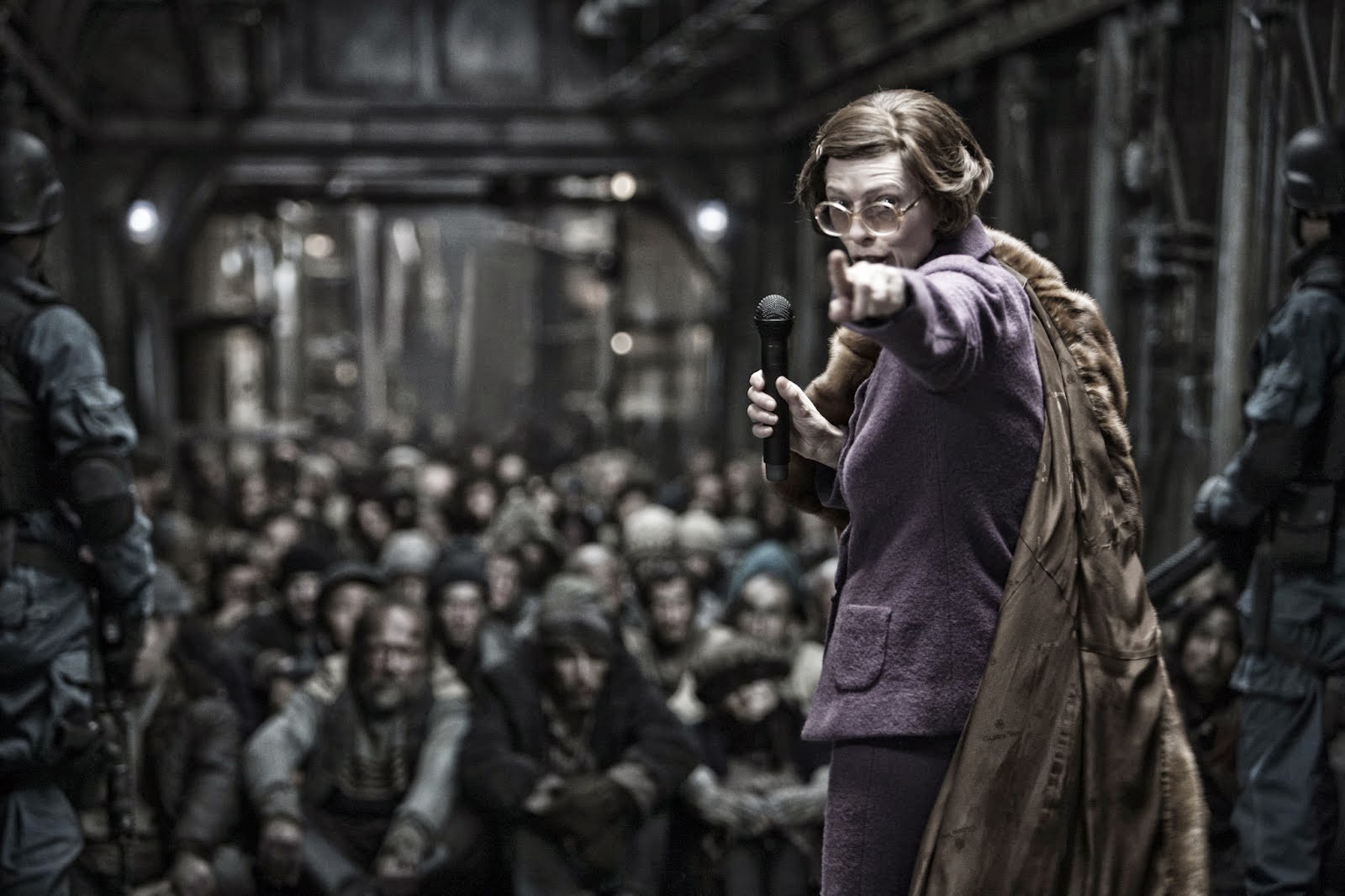 In terms of its political attitudes, this is a bit less subtle than the rest of Bong's filmography. With The Host, he managed to evoke incidents surrounding the Gwangju Uprising while playing with the relationship between Korea and the United States. With Mother, he commented on Korean family dynamics and the struggles of of lower class. With Memories of Murder, he offered a critique of the law and its incompetence when faced with true evil. Where those films let their politics slowly seep in through the seams of the story, Snowpiercer heavily heaps on its critique of class conflict from start to finish. "Know your place," Mason tells us. "Accept your place. Be a shoe." The allegory is fun and effective, but it's far from subtle.

On the other hand, the film shows great technical strength in its consistent and vivid visual aesthetic. It not only succeeds in shooting with a very restricted amount of space, it manages to do so with a great deal of cinematic art: relatively long takes even during action sequences, elegant tracking shots and wide angle lenses despite spacial constraints, and harsh lighting and strategic use of color to evoke tonal shifts. Snowpiercer looks so good you'll forget that it should be difficult to shoot an entire movie on a train. 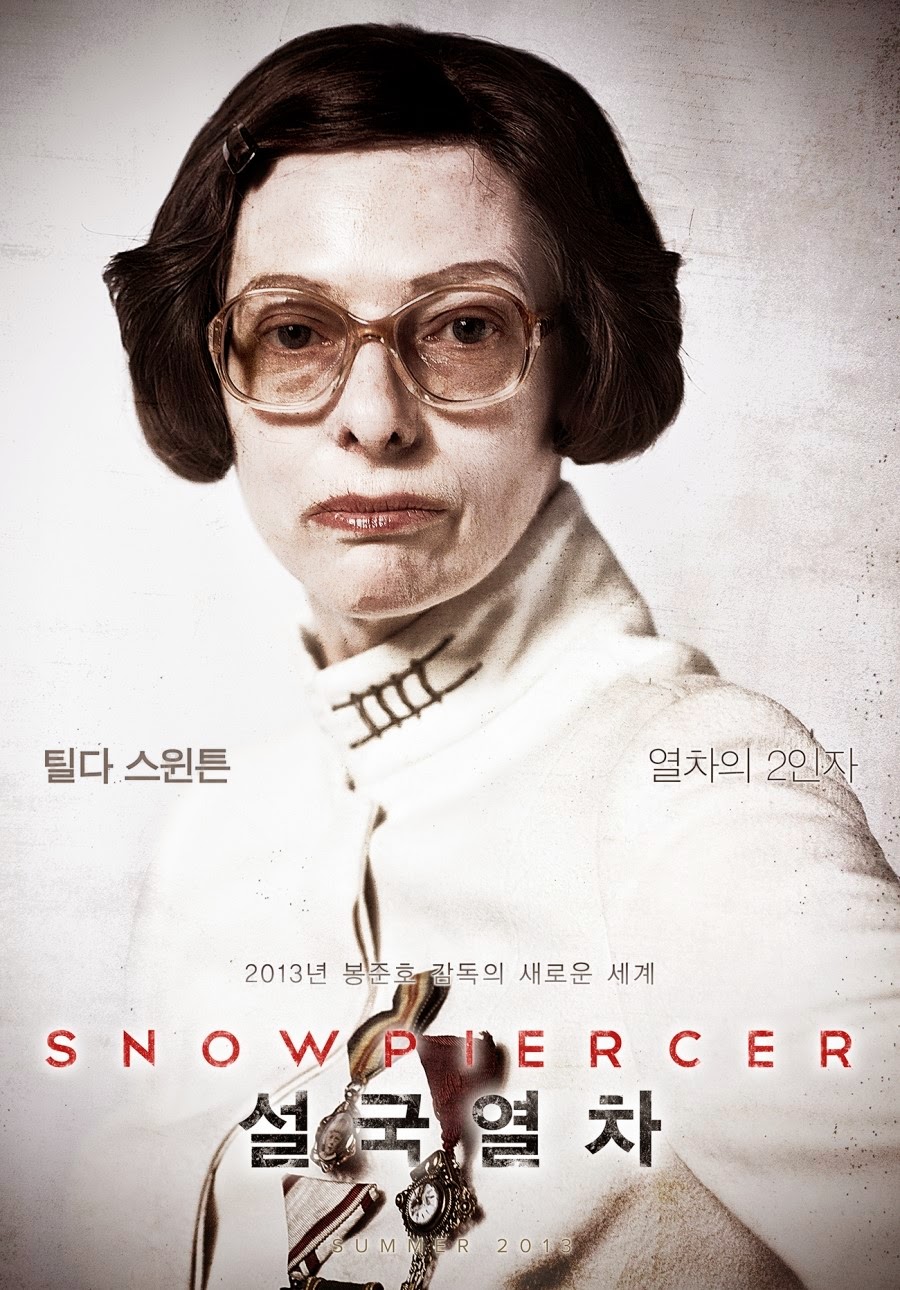 The casting decisions also feel perfect. Tilda Swinton gives an amazing physical performance and steals a variety of scenes as Mason, an overseer whose allegiance is only to herself. Chris Evans shows enough strength and fortitude to carry the show while also managing emotional range through his relationship with Jamie Bell and a tearful retelling of his history on the train. John Hurt, Ed Harris, and Kang-ho Song are also exceptional in their relatively small roles. Luke Pasqualino rocks his actions scenes and Ewen Bremner capitalizes on his unusually expressive face.

Action isn't my favorite subgenre of sci-fi, but Snowpiercer manages to achieve an unexpected amount of success thanks to its political backbone and technical prowess. But what makes this a truly exceptional release is its message, which starts out as a simple and forthright critique of hierarchy but takes on an extra dimension in the film's final moments. This discussion will contain spoilers (including the broad strokes of the plot and the climactic conclusion), so consider yourself warned.

Snowpiercer is an allegorical microcosm of class conflict. As you move from the tail end of the train up to its front, you also witness a corresponding change in the socio-economic standings of the passengers. Tail-end passengers are dirty and underprivileged, surviving off of protein blocks made from crushed insects, while the passengers on the other end dine on fine sushi, relax in tranquil gardens, and enjoy typical upper-middle class pleasures from standardized education to drug-fueled dance parties.

The general thrust of the narrative is that Curtis and his band of revolutionaries want to overtake the train by force and restructure the unjust hierarchy forced on them. Their plan is to take the engine room at the front of the train: as Curtis points out, past revolutions failed because they didn't take the engine. But when they finally make it there, Nam (Kang-ho Song) points out that the scope of Curtis's revolution is limited to the train itself. He is ultimately held back by his tunnel vision. While Curtis wants to take over the engine room and thereby the rest of the train, Nam wants to exit the train entirely. 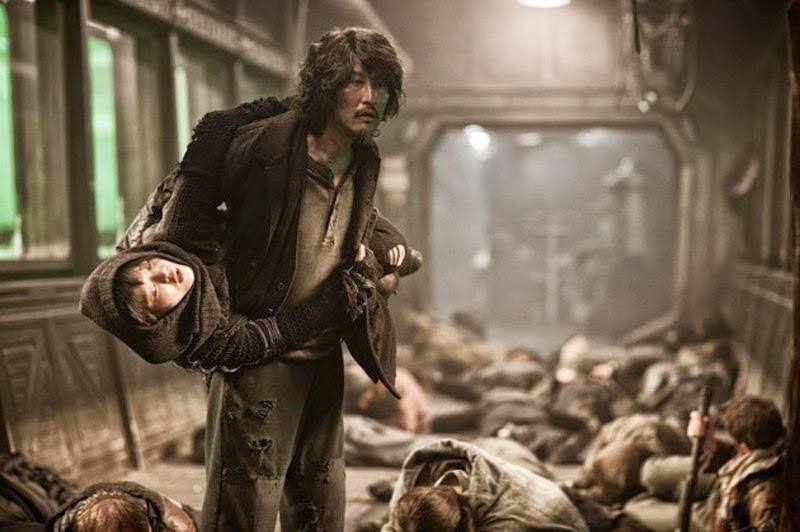 This transforms the political analogy at work in the background of the film. From the initial message of "rise up and replace your oppressors" (literally embodied in the opening scene where Curtis refuses to sit), the message shifts gears here into something more complex. The point of revolution is not to replace your oppressors, because as Wilford (Ed Harris) makes clear this will only lead to becoming what you fought against. He explains that revolutions like Curtis's are purposefully incited in order to maintain balance and control population size. Curtis's revolution was always already playing into the hands of his enemies, and accepting Wilford's place in the engine room will give them exactly what they want. It will contain their disruptive energy and allow the train to continue its endless circle around the globe.

Nam's insight introduces the idea that instead of replacing the train's conductor, which would simply start the same cycle of violence over again, the purpose of revolution ought to be exiting the established political space entirely in order to create the potential for something totally different. The snow has been melting and humanity can survive to create a new society outdoors. Whether this new society will return to the old tyranny or truly transcend previous political boundaries is the question asked by the ambiguity in the film's ending. Given the chance to start fresh, will we build something great in the snow, or will we simply clear it away and return to what was underneath?
allegory analysis class conflict dystopia explained film interpretation meaning microcosm movie reading review revolution sci-fi Snowpiercer