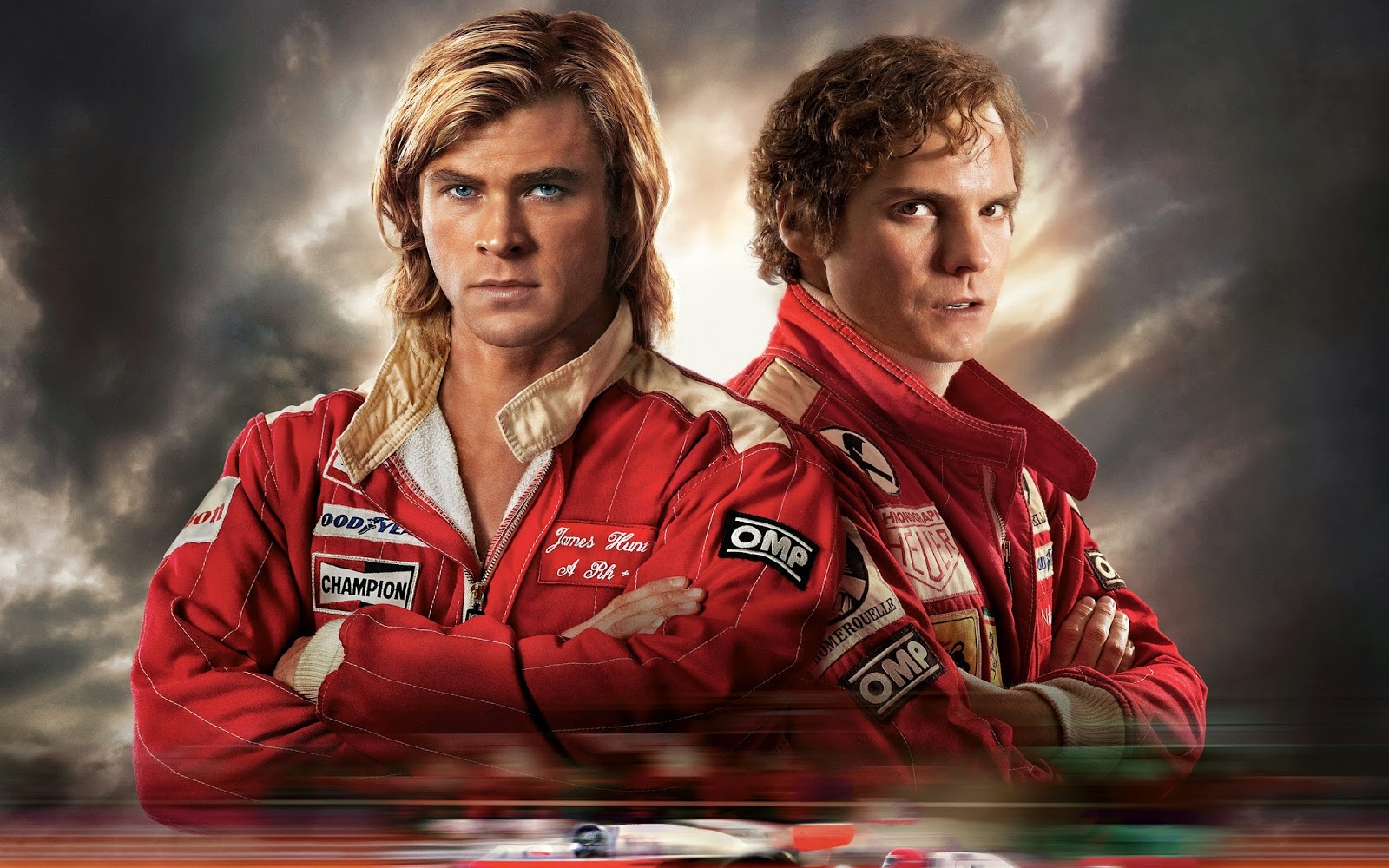 Every year we see some films which stick with us and some which don't; some films impress us on first viewing but diminish subsequently, while others ripen with age. The tendency among reviewers (for obvious traffic-related reasons) is of course to come out with "best of the year" lists as soon as possible, but whether these films will remain personal favorites years later is a question only answerable in time. In this light I recently decided to revisit Rush, a September 2013 release recognized at the Golden Globes but ignored at the Oscars, and a movie which I personally enjoyed enough to place in my top 10 at the end of the year.

As the race for the best films of 2013 began, I never saw Ron Howard's late starter Rush coming up from behind. It was running against a tough pack of competitors, with new films from the Coen brothers, Martin Scorsese, Wong Kar-Wai, Park Chan-Wook, and David O. Russell, to name just a few. What's more, as you can probably tell by these horribly forced racing metaphors, I have absolutely no interest in the sport. But nevertheless, this Formula One film sat solidly in my top 10 for the year until recently being displaced by Under the Skin. So what makes Rush so special?

There's no denying the intensity and realism of the racing sequences. The sound design for the cars is incredible, both putting the audience right in the driver's seat and making the machines sound appropriately dangerous and threatening, as if they might explode at the slightest provocation. The editing and shot selection is also impeccable, blending both shots of real racers with computer animation as well as an external view of the race with an internal view of the car. But while these scenes stand out as exceptional, they're not what has me coming back for more almost a year after its release. With Rush you may come for the races, but you stay for the characters.

I feel bad for it now, but I never really had Chris Hemsworth pegged as a good actor. His turns as the god of thunder were solid enough for genre fare, but with follow-up efforts like Snow White and the Huntsman I thought that might have been all he was capable of. Maybe it's just that he has the perfect look for the part, and maybe it's that he brought his Thor wig with him from The Avengers movies, but I can't imagine anybody doing a better job playing the cocky, aloof, charismatic prick of a playboy James Hunt. And Daniel Brühl, an actor I'm much less familiar with (he had smaller roles in Inglourious Basterds and The Bourne Ultimatum), does at least as good a job playing the opposites-attract, rat-faced, mind-over-matter nemesis Niki Lauda.

"Stop thinking of it as a curse to have been given an enemy in life. It can be a blessing, too. A wise man gets more from his enemies than a fool from his friends."


But the real magic is not to be found in either one of these terrific leads individually, but in their interactions together. Each fuels the other's ambition, and this competition which pushes each racer to their peak likewise brings a real conflict and emotional core to the film. And this mutual competition provides the foundation not only for the characters' struggle, but for their salvation as well. Their final race begins with each nodding in acknowledgement of the other, and if this moment doesn't touch your heart there may be no hope left for you. The poster claims that "everyone is driven by something," and in this case it's not by cars or by love for the sport, but by each other. Racing just happens to be a convenient vehicle for their relationship.

You can find the rest of my rankings for the films of 2013 here. You can also read more about Rush in my coverage of the 86th Academy Awards: commentary & predictions; snubs & guilty pleasures.
2013 action analysis awards season best of the year character drama film Golden Globes movie Oscars review Ron Howard Rush top 10