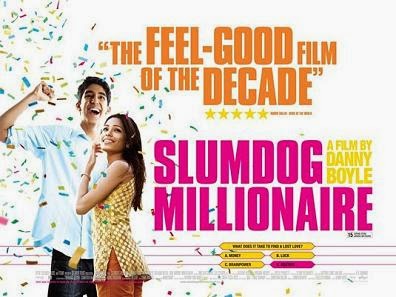 Minor spoilers after the break.

Slumdog Millionaire is director Danny Boyle's eighth feature film, and is perhaps best known for taking home eight Oscars at the 2009 Academy Awards, including Best Picture. It's generally constructed with a fairly high degree of talent: the actor's performances are all believable, the writing and editing are sharp and keep a good pace, and most of all the film looks very pretty (it also won Best Cinematography). But it is also a movie which strangely doesn't understand its own material.

It opens with the following question:


Jamal Malik is one question away from winning 20 million rupees. How did he do it?
A: He cheated
B: He's lucky
C: He's a genius
D: It is written

The question of how Jamal (Dev Patel) arrived at the final round of Who Wants to Be a Millionaire? functions as the central thematic core for the film. It asks us how Jamal made it to where he is while simultaneously asking the audience how any of us made it to where we are today. It offers a series of events from Jamal's life as an analogy for our own. But the film also ends with its own idea of the correct answer, and the answer provided implicitly by the evidence of the film contradicts the one offered explicitly in its ending. Slumdog closes with an instance of outright thematic intervention, with the answer "D: It is written" superimposed on the screen. So let's rewind and take a look at how it reaches this forced conclusion. 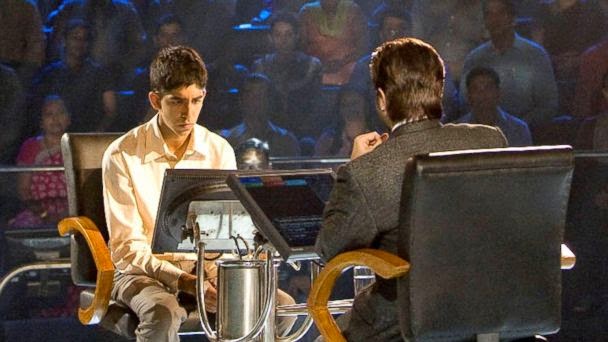 The body of the film crosscuts between three timelines: (1) Jamal's match on Who Wants to Be a Millionaire?, (2) interrogators asking Jamal how he knew the answers to all the questions, and (3) Jamal's explanation of each answer, told in flashbacks to his childhood. The general premise of the film is that the televised competition and subsequent interrogation provide tension and narrative structure, and the flashbacks provide character development and emotional investment in the protagonist while moving the story forward. The flashbacks also build the grounding and thematic foundation for the film: each one shows a pivotal moment in Jamal's personal history which just so happens to have also given him the answer to one of the questions. Taken together, the flashbacks answer the question of how Jamal arrived in his current predicament by giving both literal solutions (how he knew each answer) as well as metaphorical ones (how he became the person he is). The flashbacks are the key to the film's thematic treasure chest. 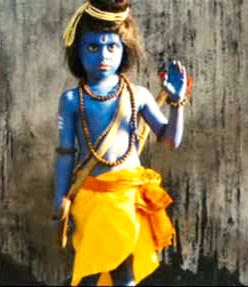 But the idea that "It is written" suggests fate or destiny, and this is exactly the opposite of how Jamal learned each answer. Each of his flashbacks illustrates how much pure coincidence is involved in his knowledge. He knows that Rama holds a bow and arrow because he just so happened to run into a child dressed as the Hindu god as he fled from the attackers who killed his mother. He knows who invented the revolver because his brother just so happened to say it. His life is a series of coincidences, a pattern which suggests the idea of radical contingency and serves as a microcosm for the way all of our lives are formed by a similarly unpredictable and "meaningless" series of chances and coincidences.

This idea that our lives are necessarily contingent is the most compelling element of Slumdog Millionaire. It's much more bold and complex than some sentimental hogwash about destiny. It's an idea which informs some of my all-time favorite films. But Danny Boyle seems to have fundamentally misunderstood what he was making.

After constructing this thematic foundation, the film undercuts itself with a sappy, mawkish love story framed within the idea that "It is written," that there is some all-powerful hand writing our fate. Instead of looking for any genuine insight into its characters or events (Jamal is surprisingly impenetrable considering how much of the movie his back-story occupies), the narrative trips at the finish line and resorts to the easy, saccharine nonsense of a childhood romance. This is emotional fantasy at its purest: we ignore the genuine troubles of Jamal and his native India because he gets the girl in the end. Instead of confronting the contingent nature of Jamal's life, his problems and those of an entire country are solved by a simple song and dance. The irony, of course, is that the film has to set up this wall before knocking it down. There are some good ideas buried in the rubble of Slumdog Millionaire, but few of them survive the implosive ignorance of its conclusion. 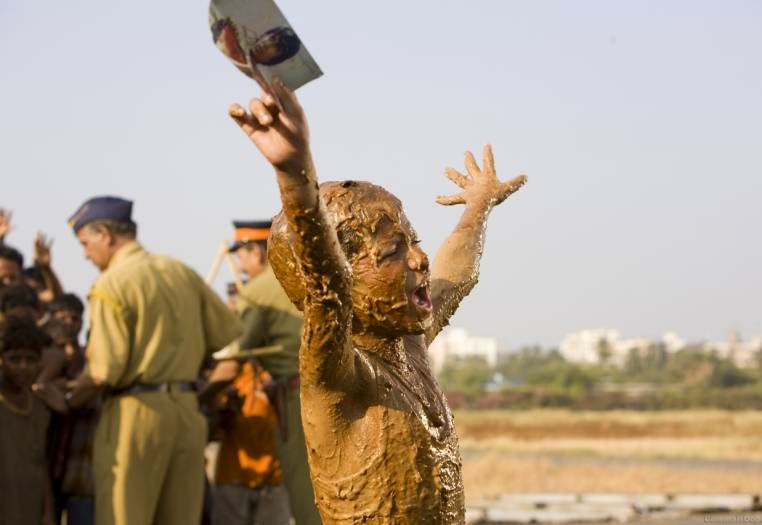 Fortunately, the film makes up for this somewhat by being massively entertaining and arguably even artistic. Boyle's collaboration with cinematographer Anthony Dod Mantle (who's worked on projects as diverse as Dogville, Dredd and Rush) reminded me distinctly of the gritty immediacy of City of God, a movie with which I recently fell in love. The color is saturated or drained when the images and scenarios call for it, there's a strong use of high contrast lighting, and the creativity of the camera angles is often quite impressive. Many of the scenes are edited in imaginative ways with a unique frenetic energy. And then there's that end-credits dance sequence, which you'd have to be some kind of heartless monster not to enjoy.

Slumdog Millionaire has me more torn than most movies. It left me disappointed, but only because my initial impression of it was so positive. It's a film whose failure is all the more curious because of its successful beginning. I wish it were different, but it's still both interesting and fun the way it is. The Academy's focus on performances and emotional appeal often leaves me unenthusiastic about their choices for Best Picture, but this is one which had enough thematic content for me to enjoy it on my own terms, even if it tried to throw that content overboard at the last minute. 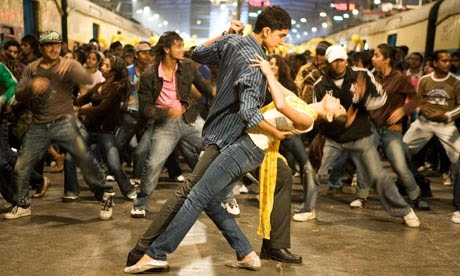