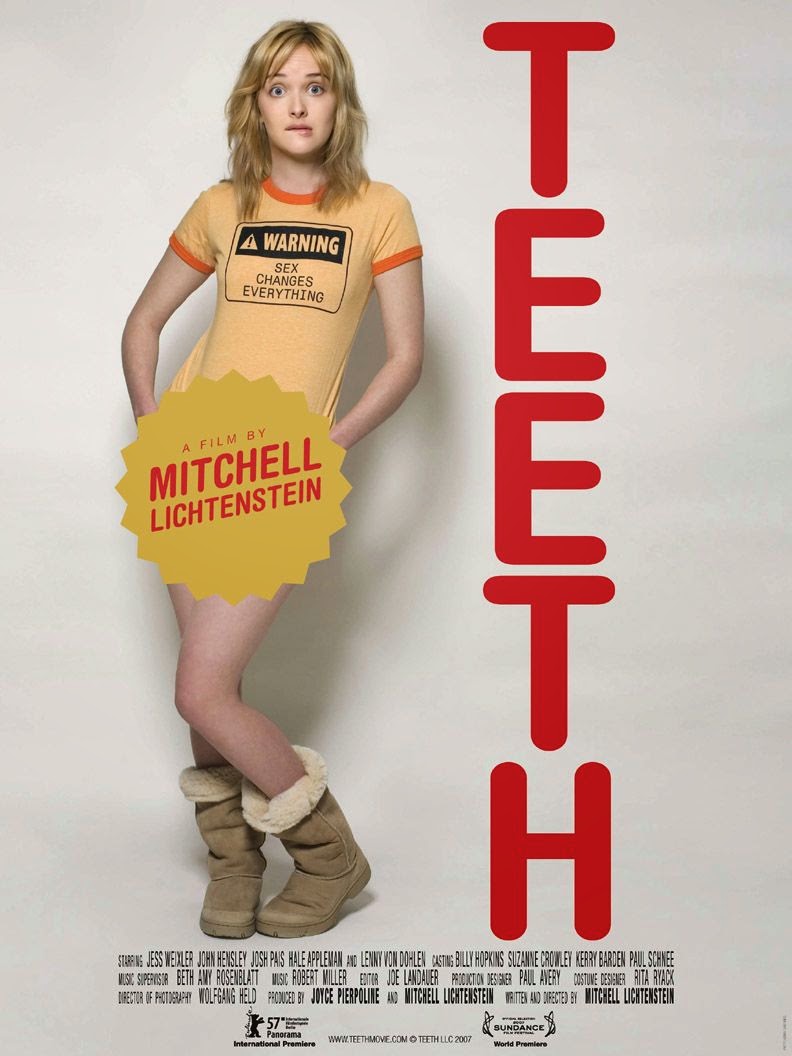 This review is definitely NSFW. You have been warned.

I'm one of those idiots who is obsessed with style and will often fall in love with movies which fall solidly into the category of "style over substance," but my love for Teeth is precisely the other way around. The movie's not very stylish, but the idea of reversing the myth of vagina dentata—a myth perpetuated by dominant male fear-fantasy—is about as close as you can get to "exactly my cup of tea" without burning yourself. Yeah, I know, I'm a little weird. Just hear me out on this one.

When I first sat down to watch Teeth two years ago, I imagined I was in for the sort of material we expect from the Saw franchise played against the background of women being evil to men. I'm a little embarrassed for assuming that's what the movie was going to be like, because I couldn't have been more wrong. If anything, it's the exact opposite of that.

Instead we spend the movie looking through the eyes of Dawn, a young woman growing up in a sexually prohibitive society who happens to have teeth in her vagina. The world tells her to fear her own sexuality, and she does (she's the head of a school abstinence group); but then she meets a boy, and they have lots of fun together. Until she chops his penis off. It wasn't on purpose: he was trying to take advantage of her, and her body just responded naturally. Unfortunately for Dawn (and for her now ex-boyfriend), her community has offered no information about the basics of her own anatomy (there's a big, shiny sticker over the female reproductive organs in Biology), and as a result she doesn't know what she should expect from her body. She has to figure herself out on her own, and this journey is exactly as sympathetic and satirical and empowering as it needs to be.

It's really just a coming of age story. Sure, it has three severed penises, two bloody stumps, and some amputated gynecologist fingers, but it's really not that hard to watch in terms of the gore. There's a scene where a dog eats its owner's detached manhood, but if you watch the movie he really had it coming. I went through and made all those screencaps myself, and I haven't had any nightmares about my penis getting chopped off (at least not any more than normal). I even did it while I was eating lunch.

Okay, so I'm definitely the weird one.

Listen: I know this movie's really not that great in technical terms. It's a low-budget horror flick and you can definitely tell. If the film weren't about vagina dentata I doubt if too many people would remember it at all. On top of that, it really doesn't have a very positive perspective of men, and offers a slightly one-dimensional critique of masculinity. But it does have more to say about contemporary American society and the way we treat female sexuality than most other movies I've seen, and I'll be damned if that's not worth a few severed penises.

I watched Teeth with writer/director Mitchell Lichtenstein's audio commentary, and while it wasn't the worst commentary I've ever listened to (that honor is still held by the Leigh Taylor-Young & Richard Fleischer's Soylent Green commentary), I would definitely not recommend it unless you're some sort of die hard Teeth completionist weirdo like me. Occasionally Lichtenstein imparts some genuine insight into his development of the concept for the film, but a lot of what he talks about is simple casting details you could find online if you were curious, and more often than not he just doesn't say anything.

You can read my original review here.