The Hound of the Baskervilles (Octoberfest Horrorthon) 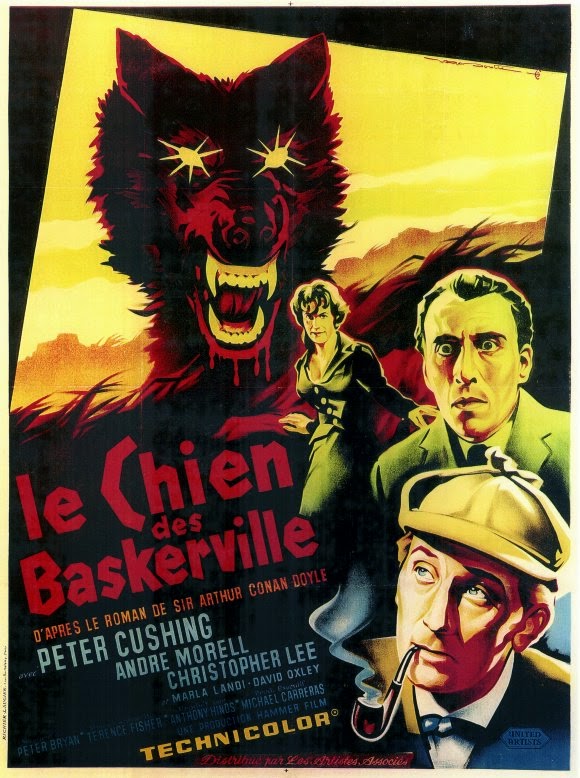 Octoberfest Horrorthon: Day 11 – The Hound of the Baskervilles (1959)

The Hound of the Baskervilles is another Hammer Horror production in glorious Technicolor featuring Grand Moff Tarkin and Saruman. But this time, the legendary Peter Cushing gets to take a stab at the equally legendary role of Sherlock Holmes, and he handles it with exactly as much class and sophistication as you'd expect. Also making this stand out from other Hammer films is the fact that Christopher Lee actually gets significant dialogue and screen time as the debonair Sir Henry Baskerville instead of playing the guttural Frankenstein's monster or the absent Count Dracula.

Perhaps what's most impressive about Terence Fisher's work with Hammer Horror is how consistent it is. The production value is always high, with particular emphasis on detailed costume and set design. The color is always beautiful, with a palette painted primarily in vibrant reds, greens and blues. The performances are always compelling, with a great combination of dramatic flair and campy exuberance. And of course, the stories are always interesting, with their slight twists on classic tales. These are all very much the case with The Hound of the Baskervilles, and the only ground for complaint is a slight lack of Peter Cushing in the middle third of the film.

More than any other Hammer film I've seen so far, Hound of the Baskervilles has an interesting subtextual perspective on sexual politics. In the "cold open"-style prelude, the titular Hound emerges after a rapacious Sir Hugo Baskerville chases a helpless damsel into a dark moor and kills her. The Hound thereby represents an external embodiment of repressed female revenge fantasy, a superegoic force revolting against patriarchal domination. To put it less pretentiously, the Hound is the woman killed at the beginning of the film come back to life to seek vengeance. This reading is confirmed in the film's denouement, but for the sake of spoilers I'll keep the details out.

If I have a problem with the Hammer Horror films—and I'm not entirely certain I do—it's that they never quite push the boundaries of the cinematic medium the way my favorite films do. They were presumably violent for their time and no doubt helped shape the horror genre as we know it today, but it's hard to look at them without relying in small part on the lens of historical perspective. They're still wholly entertaining however (and Hound is my favorite so far), and I would heartily recommend them to anyone looking for a classic perspective on horror.