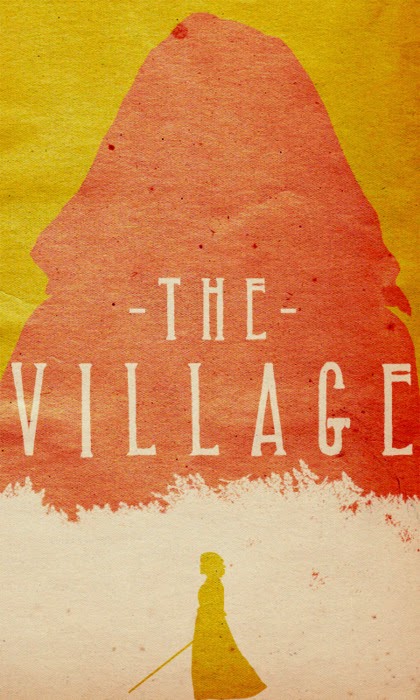 The Village is a film that I really like to stand up for. I get an almost perverse joy out of defending it. And it's not just that I enjoy talking out of my butt (although that's also the case). I genuinely think there are interesting ways to interpret the film. The readings aren't unbreakable, of course, but they're intriguing enough to keep my brain at attention. That and I think Shyamalan gets a bit more flak than he deserves. But today I learned (or relearned, perhaps) that, as much as I like talking about this film, I don't particularly love watching it.

I first saw The Village ten years ago when it was in theaters and when I still had no idea who M. Night Shyamalan was or even what I liked about film. From then to now my appreciation has gone from "Whoa, what a twist!" to "Man, that dialogue really distracts me from trying to think about the exclusion on which all inclusion is founded." I don't mean to say I'm smarter now than I was then (if anything it's probably the other way around), I simply find it interesting how taste changes over time and how movies can be enjoyed different ways by different people (or by the same people at different times).

One thing I can definitely appreciate more now than I could then—and ironically enough the thing I enjoy most about it now—is Roger Deakins's cinematography. The man just has a sixth sense for framing and choreography. Of course, while I didn't consciously notice the camerawork back then, it certainly affected my enjoyment of the film, which is what's so beautiful about it to begin with. Deakins's camera is arguably the most compelling character in the whole film. It joins hands with the ominous sound mixing, and together the two manage to create an atmosphere which makes a scene where almost nothing is happening feel tense and threatening.

The Village also weaves an intricate web of visual symbolism and narrative metaphors. For instance, there's a motif of the camera lingering on empty chairs, particularly in the quiet room and on the porch when Joaquin Pheonix and Bryce Dallas Howard finally connect (notably they are both sitting, but not in the available chair). Near the end of the film, William Hurt talks about how he'll never forget that he was sitting in his chair when he learned that his daughter would be blind. He associates the memory with a strong feeling of shame, thereby also connecting the quiet room and the central romance with a visual symbol representing shame and a narrative metaphor of sitting vs standing (inaction vs action). Through details like this, the film constructs a rich environment for interpretation.

But here's where I have to get into my complaints about the film, as thin and potentially unjustified as I think they are. I just can't get over the forced delivery of the dialogue and the stilted nature of the script. I think the entire cast does well with what they're given (and curiously enough Bryce Dallas Howard spent all 108 minutes convincing me she was actually Jessica Chastain), but to my ears what they were given sounds awkward and foolish and contrived. Maybe it's supposed to be that way; maybe it's supposed to highlight the idea that you have to "fake it 'til you make it" or something—I don't care. It just sounds silly.

I do think The Village is occasionally fascinating and often quite pretty, but unfortunately most of its compelling elements are saved for the finale. And while the lead up to the big reveal is certainly enjoyable, even M. Night Shyamalan can do better, and as much as I hate to admit it, that's not a good sign.