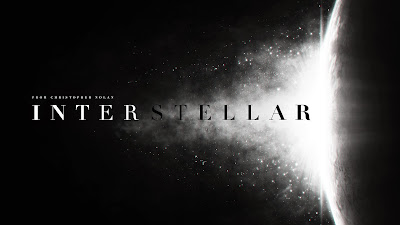 "Now we're just here to be memories for our kids. Once you're a parent, you're the ghost of your children's future."

Interstellar is the latest film from Christopher Nolan, and as such it has a lot of people very excited and is very easy to accidentally spoil. I've refrained from any plot-specific spoilers in what follows, but this is the kind of film you really ought to see knowing as little as possible. The long and short of it is that it's very pretty, very dense, and very sentimental, so if that sounds like your cup of tea than I'd suggest you stop reading now and go buy a ticket, preferably to a showing in IMAX 70mm. If you're skeptical, the biggest turn-off for audiences has been its convoluted narrative—not that it's too hard to follow, but rather that it occasionally doesn't make sense in purely logical terms. If that sounds like it might bother you, then this probably won't make it into your favorite films of the year. Personally, I loved it.

Like all great science fiction, Interstellar is a beautiful contemplation of humanity, our place in the universe, and how we talk about our future. The film explicitly investigates a host of ideas by establishing opposing ideologies through its characters and examining their implications through the consequences of their confrontation. But here's the thing: it's also implicitly about all this other stuff too. Familial relationships, historical legacies, perceptions of technology; it even tries to reconceptualize popular notions of death in a post-religious society. In short, it's exactly the kind of ambitious, thematically dense science fiction that I love—and just as importantly, it looks absolutely incredible. It does have one significant drawback, however. It spends so much time and effort trying to explain itself to the audience that it becomes like a manic car salesman trying desperately to sell a car on just one of its many virtues to a customer that already wants it anyway.

Nolan drops us right into his near-future semi-dystopia with no introductions or explanations. The world just exists the way it is, and this gives it an incredible sense of immediacy and realism lost from most of today's science fiction. There's no fish-out-of-water stereotype for characters to explain what's going on to the audience, and this is what's so compelling about the way the film opens. It develops much in the vein of classic slow-burn sci-fi, but it doesn't feel sluggish because we're given such a rich new world to explore. Of course the key aspect of it is that we're left to explore it by ourselves. There's nobody holding our hands telling us the right answer because there is no right answer. And this is why films like 2001: A Space Odyssey endure for so long, because new generations continue to find new answers (I always knew the monolith looked like an iPhone!).

But when it comes to Interstellar, I don't think 2001 is really the proper touchstone, as much as it might have inspired Nolan to do what he did. Instead what we have here is more like a combination of Sunshine and Contact. The earth is in crisis and a small group of heroes is tasked with saving it—and that's really as far as I can go without saying too much. One of the strangest things about its story is that it contains the coordinates for yet another generic post-apocalyptic rehash, and yet it never feels like one. It has a chosen one, opposing factions, and paranoid conspiracy theories, but the film succeeds in being original by relocating and reimagining these elements creatively within its narrative.

Interstellar separates itself from a genre which is quickly stagnating and rises above to present something new made out of something old. It plays out much more like Tarkovsky's Solaris or Scott's Alien crossed with the blockbuster sensibilities of early Steven Spielberg. It's built on the three stones Danny Boyle identifies as forming the foundation of serious sci-fi—the Ship, the Crew, and the Signal—but it combines these elements to give them a different flavor. At times it seems like it belongs to the rural romanticism of Terrence Malick, while at others it feels indebted to the bright optimism of Star Wars and earlier Hollywood sci-fi. But in spite of this plethora of influences, the film never feels derivative because of its inspired reinvention of what came before it.

Part of its exceptional presentation doubtlessly derives from the incredible skill of its exceptional cast and crew. It centrally features Matthew McConaughey, Jessica Chastain, and Anne Hathaway, and everyone gives convincing and emotionally gripping performances. It was shot by Hoyte van Hoytema, a man making quite a splash in recent years with his precise and detailed work on Her and Tinker Tailor Soldier Spy, and here his collaboration with Christopher Nolan is equally splendid. The duo use real film stock and practical visual effects, and the result is nothing short of breathtaking. It was also scored by Hans Zimmer, inventor of the Inception Sound, and his sonic landscape is used effectively to both lend power to emotionally intense moments and contrast the delicacy of quieter ones.

Now for the good stuff: thematic analysis. This is going to be difficult to talk about without getting into spoilers, but what would a ScreeningNotes review be without some pretentious academic nonsense? Don't worry though, I'll stay out of spoiler territory.

Interstellar's emotional and psychological kernel concerns the idea of family and what it means to be either parent or offspring. The relationship between two of its main characters is externally embodied by an idea, introduced fairly early on and thereafter developed throughout the film. It externalizes the pair's psychological connection and gives particular meaning and importance to the film's controversial third act. It conceptualizes their relationship in a way which I've never seen and which is simultaneously fascinating and beautiful (both visually and emotionally).

There's also an ongoing commentary on the way humanity looks to the future. But rather than simply contrasting "looking forward" with "looking backward", it takes a more nuanced approach. Almost everyone in the film could be described as "looking forward", and the question instead becomes how they look forward. There's a recurring emphasis on people who allow themselves to live in a disappointing present by thinking that the near future (e.g. "next year") will be better, and who thereby trap themselves into never changing the overarching circumstances of their life. By fantasizing about a better future which is endlessly deferred, they look forward but stay in the same place. The real heroes, by contrast, look forward and see the consequences the present necessarily entails, and they constantly strive for change.

Before I get into my issues with the film, I should say I went into Interstellar with the most unfairly high of expectations. I put the entirety of science fiction history in Christopher Nolan's hands. We've never had a science fiction film take Best Picture at the Oscars, and I thought that with one of the most exciting directors working in Hollywood at the moment we might have the opportunity we need to break our losing streak. I wanted another 2001: A Space Odyssey, so there's a sense in which I was always going to be at least marginally disappointed by whatever I saw, even if it was one of the best movies of the year—which, by the way, I still think it is in spite of its flaws. But flawed it is, and while none of its shortcomings are enough to derail its immense successes elsewhere, they are bothersome nonetheless.

My biggest problem is one which has been endlessly harped upon by others—the overabundance of exposition—but before you run away let me be clear. Exposition isn't a bad thing in itself, and there are plenty of movies I love which are centrally built around it (e.g. The Usual Suspects). But it becomes a bad thing when it distracts from the momentum of the narrative and attempts to spoon-feed its message to the audience. The irony of Interstellar is that its gorgeous imagery is rarely allowed to stand on its own feet. There's too often some sort of explanation of anything that might be thematically or symbolically confusing. This is much worse than unnecessary; it not only constricts the development of the film's ideas, it forces it down avenues it might not naturally travel. It also detracts from the immediacy established early in the film by its lack of hand-holding, which I mentioned at the start of the review. Plus it's just boring to watch, which is the opposite of Nolan's stated goal (entertainment).

I still love it on the whole even with the parts of it I didn't like. It's one of my favorite films of the year so far, and I wouldn't be surprised if it ends up in my annual top 10 when all is said and done. It's not perfect, but it's better than most of what we've got for sci-fi so far, and for the right audience (anyone that prioritizes visual imagery and can enjoy some talky plotting) it could be the best film of the year.

The car salesman might be manic and slightly misguided, but ultimately I want his car whether he's selling it to me for the right reasons or not.