A Refreshingly Ambiguous Most Violent Year

A Most Violent Year follows the story of Abel Morales (Oscar Isaac), a principled, up-and-coming businessman trying to succeed while maintaining his honor at a time when New York was overrun by dishonorable criminals. His wife Anna (Jessica Chastain) has vague family ties to the mafia (much of the characters' pasts are left in the background but still made palpable), and all around them are hurdles and roadblocks which would be easier to surpass if they gave in to corruption. A lawyer determined to take them down. A faceless mob determined to destroy them if they won't kneel. And at its heart, a man and woman who want nothing more than to live on their own terms.

I left A Most Violent Year not knowing what to think of it, and that's a rare and important gift for film to be able to give. Far more often than not (and infinitely more often than I'd like), I find myself coming out of movies knowing basically what I think about them (whether they're what I expected or not, whether I enjoyed them or not, etc.). Now this may just be the way my dumb brain works, but I vastly prefer a movie that leaves me confused and trying to process it after I'm done watching it than something which is easily comprehensible. Ambiguity is a beautiful thing. The movies which you do not understand easily are the ones with enough depth and complexity to stand up to repeat viewings.

My strongest immediate reaction is to say that A Most Violent Year is the counterpoint to this year's Nightcrawler (or alternately a counterpoint to something like Goodfellas or The Godfather). They are both responses to a drive for success, but where Lou Bloom is willing (and even eager) to bend the rules of law and of morality to succeed, Abel Morales does everything in his power (including things which make his life harder for himself) to keep those rules intact. Both movies are also character studies played against the background of urban America, the symbol of a decaying dream. They both show how American culture rewards corruption while paying lip service to honesty.

But as much as this is exactly the type of film I love, there are points where the nscreenplay feels undercooked and surface-level. For one thing, the protagonist is named Abel Morales. First name Abel, as in Abel from the Bible, the man killed by his brother (the same way the community seeks to kill the Abel of the film); last name Morales, as in morals, the defining trait of his character. It doesn't get any more obvious than that. There are also a variety of moments where characters who had disappeared will show up again at the most convenient possible time. Talk about Screenwriting 101.

I began to see this type of forced storytelling in the film's themes as well, particularly in the way Abel talks. He does a lot of pointed posturing, saying things like "I like to own the things I use," and "You will never do anything as hard as staring someone straight in the eye and telling the truth." But then it becomes apparent that this is not the director artificially writing himself into the dialogue, but rather that it is Abel's character trying to make the world around him conform to his point of view. It's Abel's forced storytelling, not the director's. The world is chaotic, and he's trying to bring some order to it. 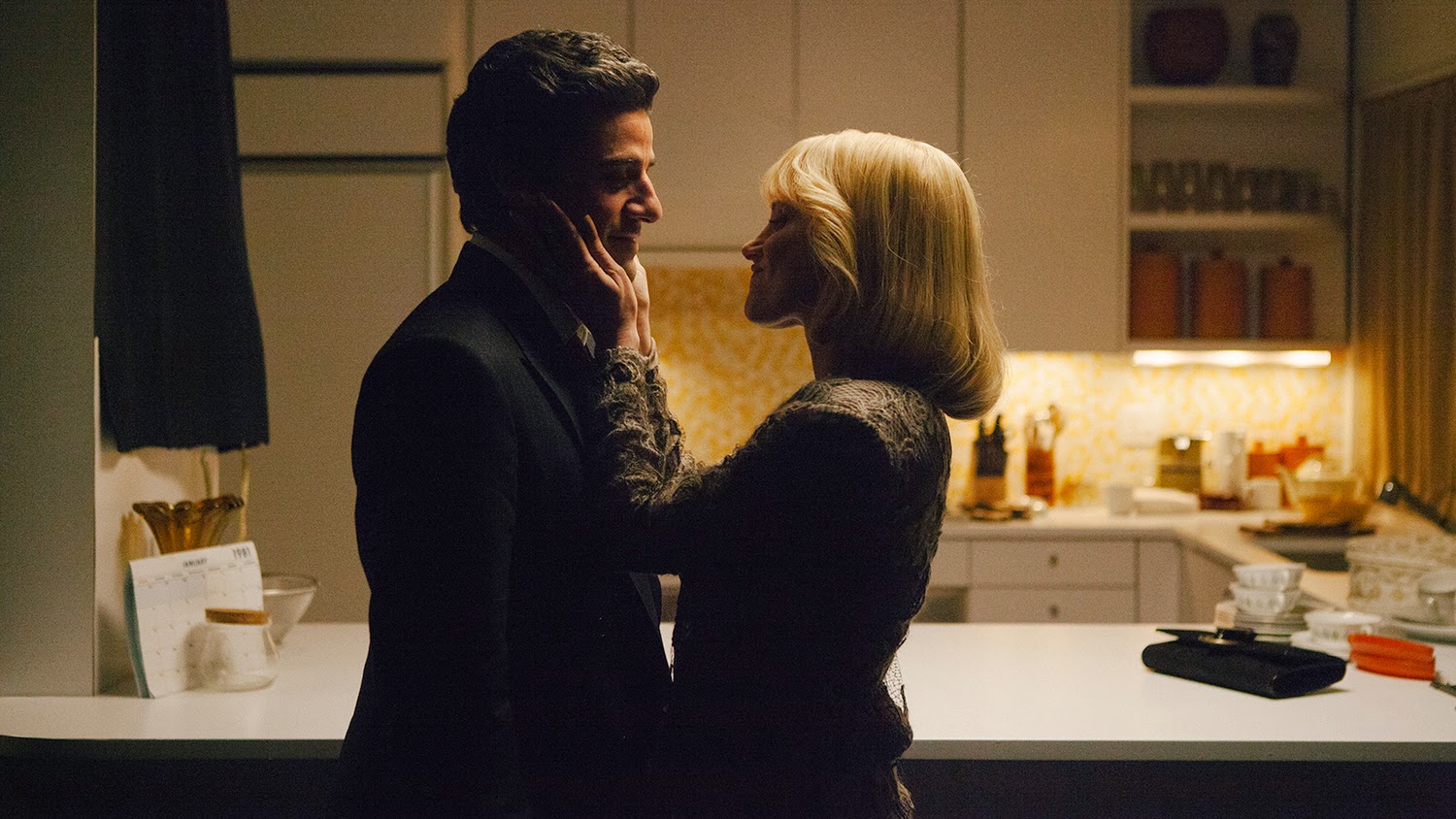 Then there were some moments which were either ruined or elucidated by the audience I saw the film with. There were a couple of scenes which caused the other viewers to laugh at points which I didn't think were meant to be funny. But as the credits rolled and the ending had cast a different light on the film, I began to think of it more as a dark comedy—even possibly as a satire of the American Dream, how it ironically doesn't have a place on its own soil—and I began to wonder whether maybe those moments were meant to be funny.

There are some more mundane things I can say for certain about the film. From a technical standpoint it's very effective and successful. Oscar Isaac proves himself to be a protean actor, disappearing into a role very different from what we've seen him do before. Jessica Chastain likewise creates a powerful persona which hints at a dark past without being obvious about it (embodied in subtleties like the way she types with a pencil to avoid damaging her nails). The cinematography is an oddly beautiful mix of clean, crisp visuals in dirty, grimy locations which perfectly fits the characters and themes of the film (trying to stay clean when New York was filled with dirt). There's a certain scene I won't spoil which easily ranks among the most intense of the year.

I know I liked it, but I don't quite know how much or whether my interpretations work. I'm going to let its ideas simmer and hopefully revisit it in the future and see if my experience of it is any different. If nothing else, it's been four days since I watched it and I already like it much more now than I did coming out of the theater. It's definitely one of the most interesting movies of last year, and may potentially grow to become one of my favorites.

PS. I'm still not sure whether the movie takes the side of Abel Morales or not. We're certainly seeing through his eyes, but some of what happens seems engineered to interrogate his altruism. If I can put it in as vulgar a way as possible, does A Most Violent Year endorse the 1%? If Morales is Capitalist America, do we want him to win? Does he?
2014 A Most Violent Year ambiguity America american dream analysis capitalism cinematography crime drama film movie Oscar Isaac review thriller writing