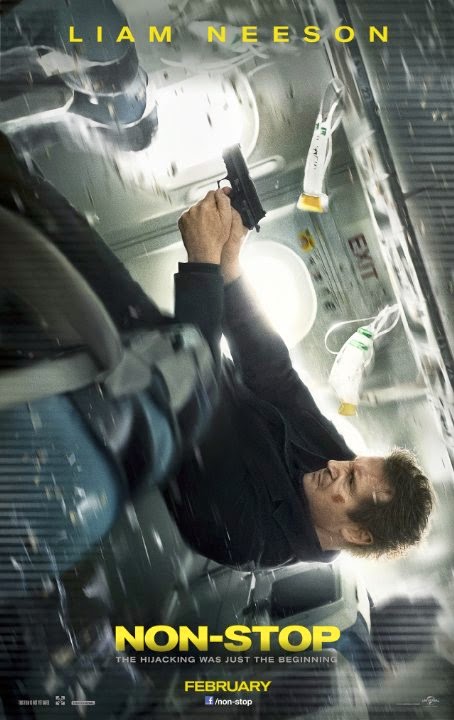 Non-Stop is Taken on a Plane. There are two things going on in it, one which basically works and one which does not.

Liam Neeson as an aging action hero with family issues never ceases to entertain me, and in this department the movie essentially delivers. Here he's recovering from the loss of his daughter and struggling with alcoholism, and this emotional core fuels the action that follows. With a movie that takes itself seriously for the most part you need a solid sentimental foundation for your characters, and while it's nothing new or exceptionally complex it's enough for anyone willing to invest. Neeson sneers and snarls, and underneath you can feel the nagging loss in his heart.

Where this movie is utterly boring and even frustrating at times is as a series of specious solutions to the timeless question of "whodunit?" This formula can become interesting when it's given more substance, but here it's just a series of misleading clues, and the only thing more annoying than another suspicious glance between flat characters is the film asking us to genuinely care when we find out who really did it.

What's disappointing about Non-Stop is that the opening scene before Neeson gets on the plane actually shows some promise. His character is set up almost entirely through visuals: we see him sitting gloomily in the car with his whiskey and the picture of his daughter. The editing and camera movements imitate Bill's lethargy and apathy, unable to focus the same way he's unable to find meaning. The slow and fuzzy soft focus brings to life not only the character's dulled senses, but his dulled emotions and his inability to care. Again, it's not exactly groundbreaking stuff, but it's easy to forget that there's some talent here after the rest of the film is so uninteresting.

Side Notes
- There's also some peripheral commentary about national security and media representation/hype. It's pretty shallow and tacked on, but it is there.
- Some of the color composition is actually rather nice, especially the mixed blues and yellows of the airport terminal. Most of this disappears once the scene shifts to the plane, though, where everything is just blue.
- There's a line reference to Airplane! ("Listen Betty, don't start up with your white zone shit again.") which I loved since this is almost Airport '14 just with a slight genre shift.