Incestuous Sexual Satire in Maps to the Stars 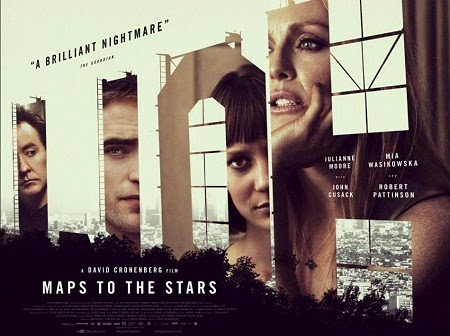 Maps to the Stars is a satire of Hollywood nepotism which takes director David Cronenberg's signature Freudian sexual politics and turns it into a message about how the film industry is in love with itself.

Julianne Moore has unresolved sexual desires for her mother ("Mother-daughter incest is so 80's-overkill."). She hires Mia Wasikowska because she reminds her of her mother (both were injured in fires, fatally in her mother's case). She tries to get hired in a remake of one of her mother's movies in the role of her mother. Mia Wasikowska tries repeatedly to marry her brother before learning that her parents are also brother and sister. Everyone has too much money ("I can't believe I just spent eighteen thousand dollars!"), takes too many drugs (the "teen sensation" Benjie Weiss has already been to rehab and back), and cares more about their own popularity than anything else. Hollywood is an incestuous orgy that runs in the family.

Cronenberg's movies are always right up my alley, and while this isn't his strongest by any means, the application of his psycho-sexual storytelling to the world of Hollywood offers a fresh take on a stale formula.

In other news, this was a weird movie to watch after Inherent Vice, because where PTA is obsessed with long takes, Cronenberg has a penchant for shot-reverse-shot. I like PTA's style more, but Cronenberg's shots are crisp and clean (ironically unlike his subject matter). This is his 11th collaboration with cinematographer Peter Suschitzky, who strangely enough also shot The Empire Strikes Back and The Rocky Horror Picture Show.