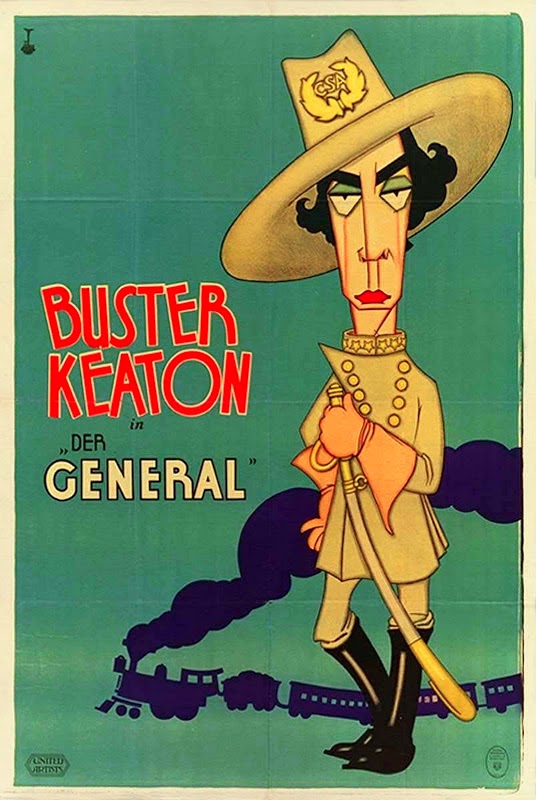 The General is only my second outing with Buster Keaton, but it's easy to see why he's such an enduring figure of the silent era. He's a master of integrating action and comedy into the same scenes*. His stunts are some of the most impressive of all time (jumping around a moving train), made all the more magnificent because the star of the show is also the stunt double (something which was perhaps easier before the advent of sound). But these sequences aren't just spectacular or exciting, they can also be hilarious. Like Chaplin, Keaton establishes himself early on as an underdog so that we root for him and rejoice in his successes. We put ourselves in his shoes, and that makes the laughter all the more genuine when he makes a fool of himself.

There are two interesting differences manifested here between Keaton and Chaplin. The General is much more rooted in plot than the majority of Chaplin's work. The intertitles here are used to deliver plot details, and because of that they're longer and more frequent, whereas Chaplin will often use title cards only to establish scenes or characters, often using a single word (album). This doesn't mean that either one is better or worse, but simply that they do different things. While Chaplin grounds his comedy in characters, Keaton grounds his in elaborate set pieces and complex stories.

And yet there's something admirable in the simplicity of Keaton's project with The General that's missing from a lot of modern Hollywood filmmaking. Take The Lone Ranger, for example. It showcases two massive train-related action/comedy set pieces book-ending the film (some of the stunts even have direct reflections in The General), but in between these sequences is a bloated narrative with a mismatched tone. Whether this works for you or not, the purity of Keaton's film is impossible to deny. Even in the scenes which aren't built around set pieces have visual gags and other humor to maintain the tone and drive the story.

*For more analysis of this idea of combining action and comedy, check out this great episode of Every Frame a Painting.
action analysis Buster Keaton Charlie Chaplin comedy film movie review set pieces silent stunts The General The Lone Ranger