Style As Substance: Step-Printing in As Tears Go By 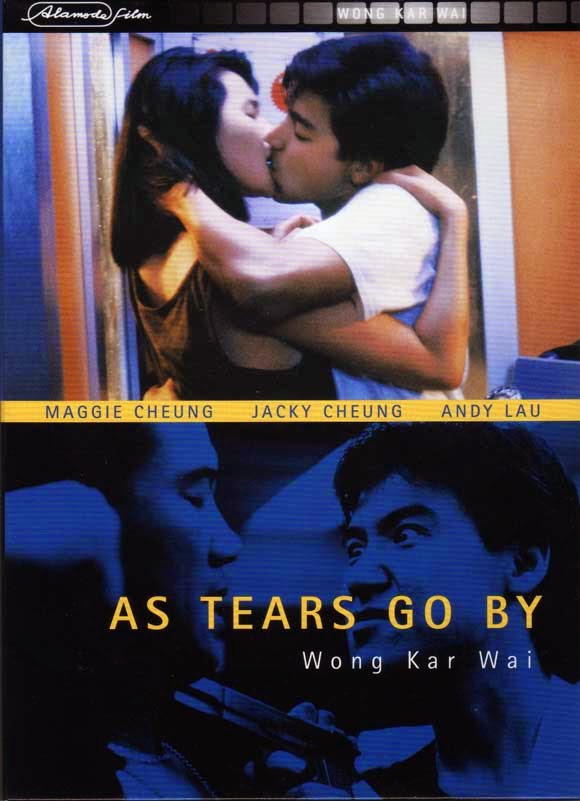 As Tears Go By, the first feature film from Hong Kong director/cinematic mastermind Wong Kar-Wai, offers up all the stylistic flourishes which would eventually become his trademark. Even if it's not quite on par with some of his later work, it's still beautiful and fun and immensely impressive, especially for a feature debut. Imagine if Martin Scorsese's Mean Streets were directed by the late great Tony Scott and you actually have a fairly accurate approximation of what it's like. Wong blends violent crime with romantic melodrama in a way that will make you think the two were born to be together. But as much as the film is deeply steeped in American genre traditions of the 1980's, it works just as hard to violate those traditions and become its own unique creation—as well as part of what helped shape Hong Kong Second Wave cinema.

Wong Kar-Wai is a master of using film form as an externalization of internal emotions. He's a perfect example to bring up when talking about "style over substance," because he's one of a short list of filmmakers who knows how to use style as substance.

My favorite example of this is the way he uses undercranking and then step printing to achieve a unique style of slow motion cinematography. The principles at work here involve shooting at a lower frame rate so that the footage would appear sped up when projected at normal speed, but then slowing this sped-up stock back down and effectively projecting it at the lowered frame rate but in real time. The result is a choppy effect with lots of motion blur which creates a significantly altered vision of the world. (If that still doesn't make sense, here's a quick 2-minute video showing the result of this process in varying degrees.)

Wong Kar-Wai uses this method to give the audience a sense of the distorted reality his characters are experiencing in moments of emotional overload. It appears most notably during the famous kiss scene where our protagonist Wah (Andy Lau) finally acts on his long-standing love for Ngor (Maggie Cheung). Here, the slow motion visualizes the characters' excessive feelings on screen, slowing down time as if the characters want to never leave the moment, externalizing internal emotion and thus delivering substance not through dialogue or plotting but simply through the style of the image. 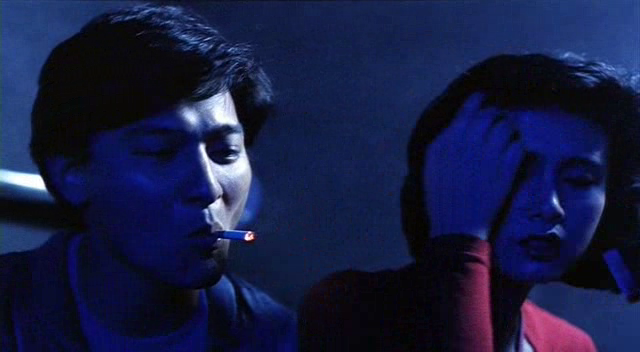 Wong also layers this style by flooding his scenes with high saturation colored lighting to evoke the moods of his characters. An early scene (above) where Wah confronts an old girlfriend appears completely blue with the exception of Wah's lit cigarette and the girl's bright red dress. This gives the scene a visual sense of the overwhelming melancholy Wah feels (the image is as blue as he is), offset by small patches of red embodying his burning desire (literally, in the case of the cigarette). Contrast this with a later scene where Wah wakes up hung over which is lit with dull grays and browns, representing the dullness of his thoughts. (This "color as mood" methodology is something Nicolas Winding Refn also uses quite frequently.)

Wong also has a habit of obstructively framing his subjects so that they appear marginalized by their environment. In 2046 and In the Mood for Love, he uses this to visualize the distance felt between two characters; but in As Tears Go By, he uses it to express the alienation his characters feel at the hands of the towering inhumanity of the city. For example, the opening credits (below) play over a shot of Hong Kong in which a storefront imposes itself over more than three-quarters of the screen, with the people and the credits themselves forced to occupy the much smaller remainder. This reinforces how small people feel in comparison to the abstraction of the city, an entity which finds itself further embodied in the violent gangsters who rule it. 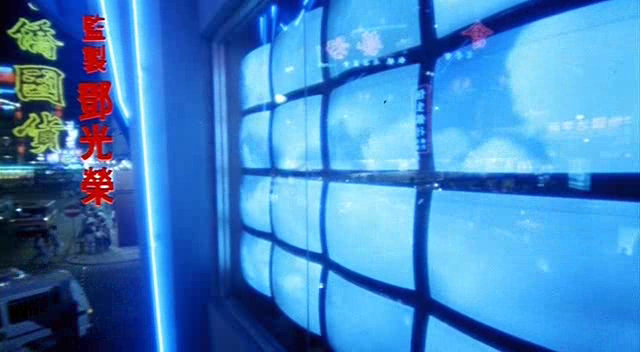 As Tears Go By has all of Wong Kar-Wai's signature style, and he blends it into a mafia crime narrative that would have Martin Scorsese foaming at the mouth and plays it over a distinctly 80's pop rock soundtrack that left me feeling nostalgic for my childhood. It's a wonderful film; the only problem is now that I've seen it I have fewer of his movies to watch for the first time.