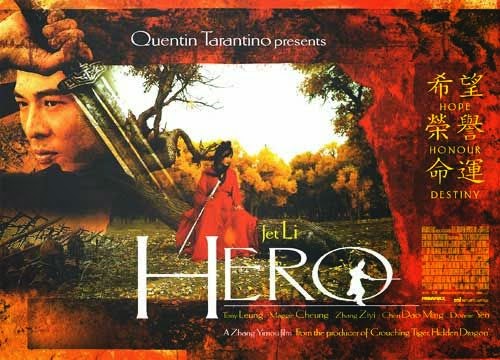 The following analysis contains potential spoilers for the broad strokes of the plot of Hero. If you haven't seen the movie yet and are looking for a quick reason to check it out, it has some of the most beautiful photography ever. If you like kung-fu movies and don't mind "wire-fu" then you'll probably find as much enjoyment in it as I did.

Hero is a historical wuxia, or a king-fu period piece, but the battles between warriors stand in for a more important battle happening beneath the surface of the film. The fight scenes are highly choreographed and excessively stylized (a practice commonly referred to as "wire-fu"), and this gives them a mythical quality that indicates they may not be taking place in a world of traditional realism. These fights represent a different struggle, one indicated by the narrative structure in which they're presented. The story of Hero is told by a Nameless warrior to the king of China's Qin state. During their discourse, however, the king eventually questions whether the story is entirely truthful, and the two men go back and forth telling their different accounts of the same story. In this way we begin to see that the film is not merely about battles between great warriors, it is about the battle between storytellers over who will tell the story of China. It is about the battle over Chinese national identity.

Hero begins by outlining the national crisis in China: there is a constant threat of assassination from outside Qin. China is not yet united at this point in history, and various powers vie for dominance over its leadership. The Nameless warrior claims to have killed the three most serious threats to the king's life, but these battles are won or lost not based on the warriors' proficiency with their weapons. the first indication that these are not merely contests of physical strength is that each battle is characterized by a certain cultural touchstone (first music, then calligraphy), reminding us that these are not merely sword fights but carry an added significance for the Chinese nation as a whole.

The film is constantly concerned with this question of national power. When the Nameless warrior arrives with the news of his victories, he is offered riches in the form of gold and he is offered the opportunity to move closer to the king and have a drink with him. Nameless shows no interest in these formalities, and in this way the film presents us with another crisis: what if the national identity we're fighting for is nothing more than these empty gestures? What if the idea of a unified China is as hollow as the king's empty castle?

Even the film's title carries a relevance for the question of national identity: not only does is ask what constitutes a hero, but also what constitutes "our hero", the hero of China. The obvious hero seems to be this Nameless warrior, this man without a family whose only point of identification is his birth place. He is a man defined by his national identity. But then we learn that he was not born in Qin, that he is instead from the neighboring state of Zhao where the assassins he claimed to have killed were from. He has protected Qin from its exterior threats, but he has done so in order to get close to the king. His real mission was to convince the king that, if he is to unify China, he must do it in the right way. He teaches the king that the true warrior is the one who gives up his sword, and likewise the true king must fight in order to stop fighting.

The true Hero is therefore a vanishing mediator, a man who cannot be included in the social order he seeks to establish. The same way the warrior must use his sword in order to give it up, Nameless must leave the city after his encounter with the king. He is a violent man seeking to create peace, but his violence has no place within the peace he creates. Like Batman in The Dark Knight, like every cowboy that rides off into the sunset, the true Hero exists in order to disappear.
action analysis China color drama film hero interpretation kung-fu melodrama movie national identity nationalism reading review vanishing mediator wire-fu wuxia